Good morning. The U.S. and Europe are responding to the latest virus waves differently, and one approach is working better than the other. 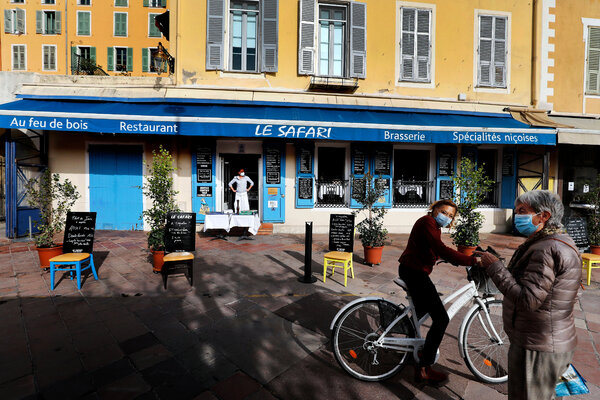 As the coronavirus has surged again in recent weeks, much of the United States has chosen to keep restaurants open and schools closed. Much of Europe has done the opposite.

The European approach seems to be working better.

Look at this chart, which shows the number of new daily virus cases in five countries, adjusted for population size:

As you can see, both the U.S. and Europe have been coping with severe outbreaks, with caseloads rising even faster in much of Europe than in the U.S. during much of this fall. But over the past two weeks, France, Germany, Spain and Britain have managed to reduce their growth rates.

What is Europe doing differently? It is cracking down on the kind of indoor gatherings that most commonly spread the virus. England closed pubs, restaurants, gyms and more on Nov. 5 and announced they would remain closed until at least Dec. 2. France, Germany’s regional governments and the Catalonia region of Spain have also shut restaurants, among other businesses.

“I’m sure the Europeans didn’t want to restrict their activities any more than we do,” Janet Baseman, an epidemiologist at the University of Washington, told me over the weekend. “Everyone is tired and ready for this to end, but we have to accept the reality of the data before us.”

Many Americans have resisted accepting that reality. Across much of the country, restaurants remain open for indoor dining. Last week, New York State announced a new policy that public health experts consider to be a bizarre middle ground: Businesses with a liquor license can stay open until 10 p.m.

The one indoor activity that appears to present less risk is school, especially elementary school. Why? Young children seem to spread the virus less often than adults do. “Research has shown that if you put social-distancing protocols in place, school is actually quite a safe environment,” Andreas Schleicher, who studies schools for the Organisation for Economic Co-operation and Development in Paris, told NPR.

Closing schools and switching entirely to remote learning, on the other hand, has big social costs. Children are learning less, and many parents, mostly mothers, have dropped out of the labor force. The U.S. is suffering from both of these problems and from a raging pandemic.

There are no easy answers, to be sure. Closing restaurants and other businesses creates economic hardship (which some European countries are trying to reduce through government aid).

And the virus is now spreading so rapidly in the U.S. that keeping schools open does pose risks, including the chance that teachers, janitors and other workers infect one another. To keep schools open in a safe way, the U.S. would probably first need to close other public places. Only a few states — including Michigan, Oregon, New Mexico and Washington — have closed indoor dining recently.

But if there are no perfect solutions to the pandemic, there are better and worse ones. Right now, the U.S. seems to be falling well short of what’s possible.

The number of new cases in the U.S. has risen every day for more than a month, based on a rolling seven-day average. That daily average is now more than twice as high as it was during any point this summer.

As Mexico copes with one of the world’s worst outbreaks, Mexico City will close all bars and restaurants for two weeks.

A larger than normal number of U.S. medical practices have closed this year. Among the potential causes: burnout among doctors and nurses. The most precious resource of the U.S. health care system “is the expertise of its workers — and they are exhausted,” Ed Yong of The Atlantic reports.

N.F.L. officials said there was no evidence that any players or coaches had contracted the virus during games.

Biden plans to campaign on behalf of two Democrats in Georgia who are running in Senate runoff elections, his incoming chief of staff said. The races will determine which party controls the chamber. Biden won Georgia narrowly, doing better than either of the Democratic Senate candidates.

Trump appeared to acknowledge Biden’s victory in a tweet yesterday, saying that “he won because the election was rigged.” Trump later reversed himself, tweeting that Biden had “only won in the eyes of the FAKE NEWS MEDIA. I concede NOTHING!”

China and 14 other nations — including Japan and New Zealand — signed a free-trade agreement, cementing Beijing’s economic influence in Asia. The Obama administration had negotiated a rival agreement, which Congress did not ratify and the Trump administration then rejected.

Armenians fled, and some set fire to their homes, after a Russian-brokered peace deal ended a six-week war and handed control over a part of the ethnic Armenian Nagorno-Karabakh region to Azerbaijan.

More than 82,000 people have come forward with sex-abuse claims against Boy Scouts of America leaders.

A SpaceX rocket launched four astronauts into orbit for a six-month stay on the International Space Station.

Dustin Johnson, a golfer with a history of blowing late leads in big tournaments, held onto his lead this week and won his first Masters, by five strokes.

Barriers falling: The Miami Marlins named Kim Ng as their general manager, making her the first woman to run baseball operations for a major league team. And the pop star Harry Styles became the first man to appear alone on the cover of Vogue.

Trilobites: Platypuses glow under black light. Scientists have no idea why.

Lives Lived: Lee Hyo-jae championed women’s rights and democracy in South Korea, helping abolish the country’s patriarchal naming system and standing up to its military dictatorship in the 1980s. She died at 95.

Subscribers make our reporting possible, so we can help you make sense of the moment. If you’re not a subscriber, please consider becoming one today.

Since Netflix’s “The Crown” began airing in 2016, fans have excitedly anticipated Princess Diana’s character. This weekend, she arrived, in the first episode of the show’s fourth season.

It covers Diana from age 16 to 28, starting in the late 1970s. Emma Corrin, in her first prominent role, is playing the part. Sarah Lyall, a former London correspondent for The Times, writes that Corrin nails “the princess’s seductive signature gesture — head tilting to the side, eyes glancing coquettishly upward through her bangs.”

The portrayal is based on interviews, news media accounts and a tell-all 1992 biography by Andrew Morton. Diana made revisions to the manuscript in her own handwriting and personally approved every page, Morton has said.

One new challenge for this show: A large part of its audience will have lived through the events it’s depicting, like Diana’s wedding to Prince Charles and Margaret Thatcher’s tenure as prime minister. Can the show still feel like the escape that the first three seasons were? “As always, they have taken many cinematic liberties,” Sarah writes. “‘Crown’ watchers in Britain are already debating what is accurate and what has been changed for dramatic purposes.”

A new building at the Museum of Fine Arts in Houston showcases works by Latin American and Latino artists who are rarely shown in the U.S. (In Opinion, Ileana Ros-Lehtinen, a Republican former member of Congress, and Ken Salazar, Barack Obama’s former interior secretary, argue that the country should create a museum honoring American Latino history and culture on the National Mall in Washington, D.C.)

The pangram from Friday’s Spelling Bee was continuity. Today’s puzzle is above — or you can play online if you have a Games subscription.

P.S. The word “hyperfuturist” — about a new Lil Nas X music video — appeared for the first time in The Times over the weekend, as noted by the Twitter bot @NYT_first_said.

Today’s episode of “The Daily” is about the divides among House Democrats. On the latest Book Review podcast, David Byrne discusses turning his Broadway show into a book.