The storming of the Capitol on Jan. 6 by a rabid mob of Donald Trump supporters resulted in a failed insurrection. But for far-right extremists, including anti-government militias, white supremacists and violent conspiracy theorists, nothing about the insurrection was a failure.

Throughout the 1990s, several incidents amplified the rallying cry of the far right: Ruby Ridge, Idaho, in 1992; Waco, Texas, in 1993; and the Oklahoma City bombing in 1995. In the first two incidents, federal agents raided compounds to arrest armed domestic extremists. In Oklahoma City, Timothy McVeigh committed the deadliest act of domestic terrorism in U.S. history when he bombed the Alfred P. Murrah Federal Building, killing 168 people. The events themselves barely need explanation beyond the images that their names alone evoke. Within anti-government circles, these were watershed moments that evolved into enduring propaganda.

Similarly, the siege of the Capitol will be framed as a successful demonstration — proof of concept. Almost immediately, images from that day proliferated across social media platforms. On Telegram, white supremacists brazenly trade tips about how to recruit MAGA adherents who abandoned mainstream sites like Twitter in search of more extreme content.

Large segments of the mob that stormed the Capitol were unaffiliated — individuals and small groups, family members, neighbors. These could well be the new foot soldiers of the far right. Some, and perhaps many, of these new recruits will have military experience or law enforcement training. What’s more, the infusion of younger members into the ranks of the far right is likely to breathe new life into the movement, ensuring its longevity.

Just as many Americans were motivated to join the U.S. military after the Qaeda attacks of Sept. 11 in what they considered an act of patriotism, some may now enlist in anti-government militias or racially motivated extremist groups in an act of reverse patriotism. Online, recruitment efforts have white supremacists speaking openly of co-opting “Parler refugees,” referencing the conservative social media platform that many Trump supporters flocked to after Mr. Trump was banned from Twitter for inciting violence. References to the date Jan. 6 will be just as symbolic for far right extremists as the date Sept. 11 is to Americans.

Bolstered by conservative cable news networks and radio as well as social media, Mr. Trump had been laying the groundwork for political violence for years. His efforts to spread disinformation, undermine longstanding democratic institutions and pit Americans against one another will continue to help propel the far right long into the future.

In a PBS NewsHour Marist poll, 8 percent of Americans surveyed said they supported the insurrection. For a movement obsessed with the concept of government tyranny, the imagery of the Capitol siege — the most powerful symbol of U.S. government — will have enduring resonance.

The turbulence of the next several years should not be underestimated. Record-setting firearms sales, looming economic calamity and the continued fraying of America’s social fabric — exacerbated by declining mental health, rising domestic violence and worsening substance abuse during the pandemic — make for a worrying combination. 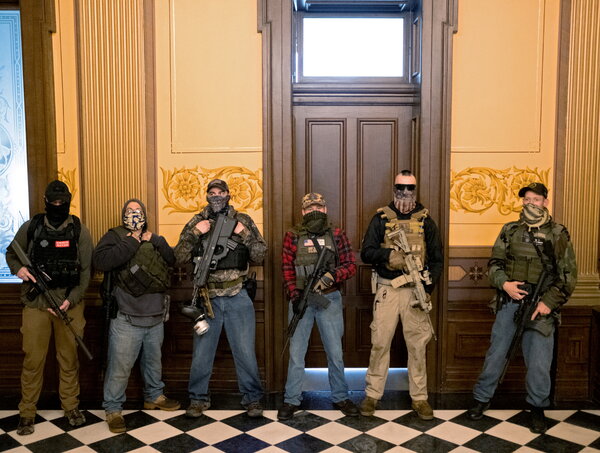 The extreme far right is often more in agreement about what it stands against than what it stands for. The movement grew so decentralized at various points, in the 1990s and again over the past four years, that it never fully coalesced around agreed-upon core tenets.

Domestic far-right extremism is poised to become a more diverse phenomenon in 2021, bringing together white supremacists marching in crowds alongside conspiracy theorists, militias and other extremists motivated by gun culture and a deep hatred of government. With Mr. Trump no longer in office, a portion of his supporters are vulnerable to recruitment into more extreme networks and, potentially, white-supremacist and neo-Nazi organizations. These groups are energized and confident in their ability to co-opt militant Trumpists.

As a result, a larger segment of the far right could come to engage in racially and ethnically motivated violence. After the inauguration on Jan. 20, QAnon followers were apoplectic, with one lamenting, “We all just got played.” Sensing the disillusionment, white supremacists pounced, reaching out to disaffected QAnon adherents and urging one another to “heighten their burning hatred of injustice” to build rapport and accelerate the grooming process.

The Biden administration on Friday announced an initiative aimed at overhauling the government’s approach to domestic terrorism. It ordered intelligence agencies to conduct a comprehensive threat assessment of domestic violent extremism, and develop the capability to counter extremism and disrupt extremist networks in coordination with federal departments overseeing evolving terrorism threats.

It’s a step in the right direction. The administration should look to pass a bill similar to the now pending Transnational White Supremacist Extremism Review Act that seeks to direct the intelligence community to develop and disseminate a threat assessment on violent white-supremacist groups operating overseas, some of which may have connections to U.S.-based extremists.

While much of the threat is indeed domestic, there are growing links with transnational far-right groups that are likely to strengthen in the immediate future. A directive to scrutinize transnational groups could uncover links to individuals or organizations operating on U.S. soil.

Lawmakers should also make domestic terrorism a federal crime. There are valid concerns about a domestic terrorism statute, including issues of free speech and assembly, and also the potential for abuse — corrupt politicians could use domestic terrorism designations against perceived political enemies. Transparency and oversight must be essential components of any new legislation.

Designating domestic terrorism as a federal crime would provide federal departments and agencies with more tools and resources to combat the threat. It would make reporting requirements for bias-motivated and hate crimes mandatory, which would provide more comprehensive data about incidents that may upon closer examination be racially or ethnically motivated. Further, it would allow federal agencies to disrupt extremist networks by investigating ancillary crimes like providing material support.

The Unite the Right rally in Charlottesville, Va., in August 2017 should have been the alarm for this country to understand the sense of urgency needed to address the threat from an emboldened far right. It wasn’t. Attacks in Pittsburgh in 2018 and El Paso in 2019, and the plot to kidnap Gov. Gretchen Whitmer of Michigan last year were all missed opportunities to take the threat seriously.

The failure to do so were signposts leading to the siege of the Capitol, an event that could catalyze an age of domestic far-right extremism.

Colin P. Clarke (@ColinPClarke) is the director of policy and research at the Soufan Group, a global intelligence and security consultancy, and the author of “After the Caliphate: The Islamic State and the Future of the Terrorist Diaspora.”