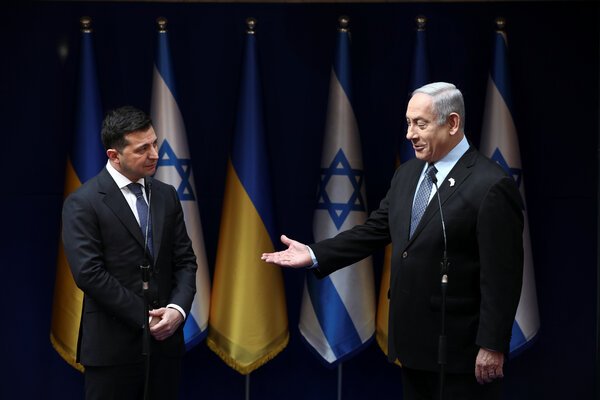 Volodymyr Zelensky made headlines again on Sunday by firing a deputy infrastructure minister suspected of bribery.

“I want this to be clear: There will be no return to what used to be in the past,” the Ukrainian president said, referring to his country’s richly deserved reputation for corruption. The minister is suspected of being part of a group that was taking bribes in exchange for equipment and machinery purchasing contracts. Zelensky followed up the next day by forbidding government officials from traveling abroad for nongovernmental purposes, presumably to hinder them from stashing any ill-gotten gains abroad but also to reassure international donors that they have an honest and reliable partner.

Also on Sunday, another world leader fired another corrupt official — but the story here is completely different.

Benjamin Netanyahu was ordered by the Israeli Supreme Court to remove a convicted tax fraud, Aryeh Deri, from serving in Mr. Netanyahu’s cabinet as both minister of health and minister of interior. The prime minister complied “with a heavy heart, great sorrow and a very difficult feeling,” as he put it in a letter to Deri that he read aloud in a cabinet meeting. Netanyahu will continue to press for ways to include Deri in the government. He could potentially give him the position of “alternate” prime minister.

For years, I had ambivalent views about Netanyahu. He is not a likable guy. His father said of him that “he doesn’t know how to develop manners that captivate people by praise or grace.” Many of his political opponents were once his ideological soul mates but were turned off by his lack of scruples. “By my code this is a sin for which there is no forgiveness, even on Yom Kippur,” Avigdor Lieberman, a former defense minister, said of his former boss after alleging that Netanyahu had authorized private investigations of his family.

The upside of Netanyahu was that he was good at his job. Israel prospered economically under his tenure. It established flourishing ties with former adversaries in Africa and the Arab world. It pulled off mind-boggling intelligence coups and greatly diminished Iran’s power in Syria without triggering all-out war. And despite Netanyahu’s reputation as a right-wing flamethrower, he usually governed closer to the center than he did to the fringe.

For these reasons, I once called Netanyahu the Richard Nixon of Israel. But that turned out to be deeply unkind — to Nixon. At least there were limits to what the 37th president was willing to do to the system of constitutional government to keep himself in office.

Nothing similar can be said of Netanyahu, who is now using his four-seat parliamentary majority (achieved with less than 50 percent of the overall vote) to push through a radical overhaul of the judiciary that would allow the Knesset to overturn Supreme Court verdicts with just a one-vote parliamentary majority. American conservatives who are reflexively inclined to support Netanyahu might ask themselves how they would feel about a system in which Chuck Schumer could use his one-seat Senate majority to overrule rulings of the Supreme Court, such as the Dobbs decision on abortion.

The point is all the more important for Israel, which lacks a formal written constitution and the usual separations of power that help guarantee minority rights in the face of majoritarian rule. As one Israeli leader put it in 2012, “The difference between countries in which rights are only on paper and those in which there are actual rights — that difference is a strong, independent court,” adding, “In places with no strong and independent court system, rights cannot be protected.”

The name of that Israeli leader: Benjamin Netanyahu.

What changed? Netanyahu got himself into legal trouble, giving him a personal interest in bringing the judiciary to heel. His coalition partners are desperate to gain a permanent exemption for ultra-Orthodox yeshiva students from military service, something the judiciary has rightly resisted on grounds of equality.

But Netanyahu has also moved along the current of illiberal democracy whose other champions include Hungary’s Viktor Orban and Brazil’s Jair Bolsonaro. Hyper-personalized, populist rule achieved by gutting institutional checks and balances is how democracies devolve into mobocracies. It’s why America’s founding fathers built our system the way they did.

After Israel’s last election, I wrote that it was wrong to say that Israel faced impending fascism. I still think that’s right: Israel’s civil society remains powerfully motivated, its military leaders remain committed to democratic norms, and even Netanyahu had to bow to the court by firing Deri. Other democracies have survived far worse leaders, including, quite recently, ours.

But if Israel is to persevere, it also must maintain the moral respect of its honest friends. Too bad for it that, today, the Jewish people’s greatest leader resides in Kyiv rather than Jerusalem.