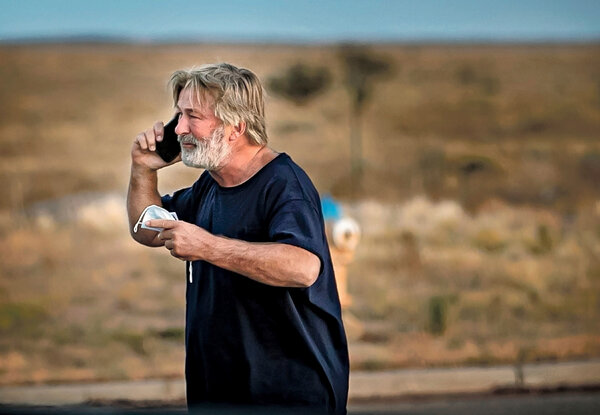 Shortly after a prop gun Alec Baldwin was holding fired a bullet that killed a cinematographer and wounded a director on the set of the movie “Rust,” in October 2021, he told the police in New Mexico that he’d be willing to do whatever they requested, including sitting for an interview at the station.

In an interrogation room later that afternoon, detectives began by informing Baldwin of his rights: He had the right to remain silent. Anything he said could be used against him in court. He was free to consult with an attorney; if he could not afford an attorney, one would be appointed for him. And he could stop the interrogation at any point he wished.

“My only question is, am I being charged with something?” Baldwin asked.

Not at all, the police said. Reading his rights, one detective told him, was “just a formality.”

And so, without his attorney present, while the police recorded him, Baldwin talked. And talked. And talked. At that point, Baldwin knew only that the film’s director, Joel Souza, and its cinematographer, Halyna Hutchins, had been injured; detectives would inform him at the end of the interrogation that Hutchins had died. Still, for about an hour, Baldwin not only answered detectives’ many questions about the shooting but also offered his own theories about the incident and suggested the next steps the police might pursue in their investigation.

To people unfamiliar with the American criminal justice system, Baldwin’s decision sounds reasonable: Something terrible happened, and he wanted to help. But defense lawyers I talked to said Baldwin’s case should serve as a reminder that if you are involved in a serious incident, it’s best not talk to the police unless you have an attorney present.

Prosectors in New Mexico announced last week that they planned to charge Baldwin and Hannah Gutierrez-Reed, the film’s armorer, who is responsible for weapons on a movie set, with involuntary manslaughter in Hutchins’s death. They argue that Baldwin had a responsibility to check that the gun he was holding was safe. The prosecutor’s argument has shocked many in the film industry who say that it is the crew’s responsibility, not an actor’s, to ensure that weapons are safe.

In that first police interview, Baldwin told interrogators that Gutierrez-Reed handed him the gun and assured him it was safe: “She said, ‘Do you want to check?’ — and I didn’t want to insult her, we never had a problem. I said, ‘I’m good.’”

Prosecutors have yet to file charges, so it is not clear what evidence they would use against Baldwin or what their legal arguments will be — but given that they’ve said Baldwin violated his legal responsibility to use the gun safely, his admission that he never checked the gun may itself incriminate him.

Also, in a second conversation with the police a week later, Baldwin said it was actually Dave Halls, the film’s first assistant director, who handed him the gun while announcing, “cold gun.” (Halls has since agreed to a plea deal with prosectors.)

“It presents a huge problem if he ever wants to actually testify,” Joshua Ritter, a criminal defense lawyer and former prosecutor in Los Angeles, said of Baldwin’s decision to talk to cops as well as the news media. “If he takes the stand to try to explain his side of things to the jury,” he will need to explain any possible contradictions in these prior statements, Ritter said.

The Fifth Amendment of the Constitution allows Americans to refuse to answer questions from law enforcement. Yet despite the ritualistic incantation on the Miranda warning on every TV police procedural, silence is a right that people can find hard to accept. If you’re convinced of your innocence, aren’t you obligated to help the police solve the matter under investigation? Refusing to talk to the police seems like something people do only when they’ve got something to hide.

I have only a passing interest in Baldwin’s guilt or innocence. Several years ago, though, I came upon the work of James Duane, a professor at Regent Law School in Virginia who has become a Johnny Appleseed of Fifth Amendment advocacy. A video of a lecture Duane gave a decade ago on the importance of the Fifth Amendment, “Don’t Talk to the Police,” has been viewed millions of times on YouTube, and Duane has since given his talk dozens of times around the country. The title of his book “You Have the Right to Remain Innocent” sums up the case for silence, since the presumption of innocence and the burden prosecutors bear to prove guilt even when the accused remains silent are the bedrock of American criminal law.

Duane’s work has turned me into a zealot for the right to remain silent — and when I watched Baldwin blithely sign away his rights, I winced. (His talking to several reporters about the case would be a separate concern.)

Of course, we have no idea how Baldwin’s words will play in his case. But his case hints at the danger that innocent people with far less money and power than Baldwin can bring upon themselves by doing what they think is the “right thing” — talking to the police.

“The average American — even if they’re a highly sophisticated college graduate or a law school student — really doesn’t know an awful lot about the many different ways in which even innocent people can regret for the rest of their lives the biggest mistake of their lives, the decision to waive their Fifth Amendment right and agree to talk to the police,” Duane told me.

Looking beyond the Baldwin case, Duane argues that a key danger is that in trying to defend yourself to the police, you may unwittingly admit some wrongdoing. Navigating around such dangers is made all the more difficult because courts have given the police wide leeway to lie to people being interrogated.

When you talk to the police, it’s unlikely that your whole story will be relayed to the jury during a trial. Duane argues that federal and state rules of evidence make it much easier for prosecutors and the police to present damaging statements from an interrogation than for defense attorneys to present exculpatory information from the same interview. Say you vehemently deny shooting a man, explain that you’ve never owned a gun and don’t know how to shoot, and point out that you weren’t anywhere near the scene of the crime — but also admit, in passing, that, “Yeah, sure, I never liked the guy, but who did?” Even if all of that is true, Duane says, the jury might hear only the worst at trial, with an officer testifying, “He admitted to me that he never liked the guy.”

Duane says that while prosecutors can ask an officer who interviewed a defendant anything they want about the statement, hearsay rules can greatly limit what defense attorneys can elicit from the officer on cross-examination about other portions of the same statement.

Do these scenarios sound far-fetched? The data says otherwise. Since 1989, the Innocence Project has used DNA evidence to help exonerate 375 innocent people falsely convicted of crimes. About 29 percent of the exonerated had been convicted in part because of false confessions. Research has found that most false confessions occur after interrogations lasting a half dozen hours or more and that virtually all involve police officers lying to suspects. Many also involve implicit promises of leniency that may give suspects an impression that talking is their only way out.

The Fifth Amendment is no mere formality. It is among the best defenses against government overreach that Americans enjoy. We should guard it vigorously. Anytime you’re asked to talk to the police about an incident you are involved in, there are just four words you need to say: “I want a lawyer.”

Farhad wants to chat with readers on the phone. If you’re interested in talking to a New York Times columnist about anything that’s on your mind, please fill out this form. Farhad will select a few readers to call.