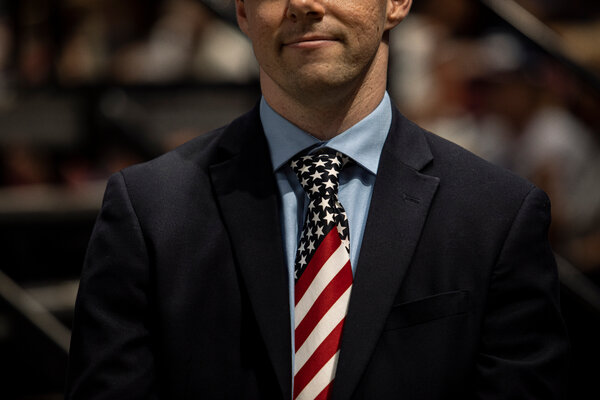 In my column this week, I tackled some of the major objections to President Biden’s Philadelphia speech on MAGA Republicans and the threat they pose to democracy, including the view that it was too divisive.

Even if it was, most Americans land on Biden’s side of the argument — in a Reuters poll conducted just a few days after the speech, 58 percent of respondents, including a quarter of Republicans, said that Trump’s “Make America Great Again” movement is “threatening America’s democratic foundations.”

What I didn’t address was the charge that Biden, and Democrats in general, are acting in bad faith when they condemn Trump and his allies. If Democrats truly believe that MAGA Republicans are a threat to democracy, goes the argument, why are they spending tens of millions of dollars to elevate them in Republican primaries? My colleagues Ross Douthat and Bret Stephens both made a version of this point in their respective columns this week.

They are keyed into something real: that it is a bit unsavory, if not outright hypocritical, for Democrats to spend huge sums to help nominate MAGA Republicans at the expense of their more moderate, pro-democracy colleagues while condemning those same candidates, and the movement they represent, as a threat to the constitutional order.

Where I part ways with my colleagues is in their conclusion that Democrats are therefore crying alligator tears when they condemn MAGA extremists. If the top priority is depriving the Republican Party of power and influence, then the most important thing for Democrats to do, right now, is win elections. And if the most Trump-aligned candidates tend to be the weakest challengers in a general election, then it is entirely consistent with the argument in Biden’s speech to want to elevate those candidates over more moderate alternatives.

At the end of the day, a more moderate Republican in Congress is still a vote for Kevin McCarthy as speaker of the House or Mitch McConnell as Senate majority leader. It is still a vote, in other words, for a coalition that includes MAGA Republicans.

I could leave it there, except that I think that this answer concedes too much to the premise. Implicit in the question is the factual claim that Democratic spending in Republican primaries is either responsible for — or a significant factor in — the success of MAGA candidates with Republican voters. Otherwise, why would Democrats spend the money and why would conservatives complain about the outcome?

Did Illinois Governor J.B. Pritzker, a Democrat, spend millions to give a boost to Darren Bailey, the Trumpiest candidate in the Republican gubernatorial primary? Yes. But Bailey led the Republican field before Pritzker’s intervention, swamping his opponents in an October 2021 poll. Democrats may have nudged some undecided voters into Bailey’s camp, but that alone does not explain how the hard-right Republican won more than 57 percent of the vote in a six-way primary. The more likely answer, given his early lead, is that Republican voters liked what Bailey was selling.

The same goes for Doug Mastriano in Pennsylvania, the pro-insurrection Republican candidate for governor. Democrats gave him a boost as well. But he led the Republican pack for much of the race and his final tally — nearly 44 percent of the vote in an eight-way contest — reflects his very real popularity with Republican voters in the state.

The other thing to consider is the actual content of Democratic ads on behalf of MAGA Republican candidates. The ad meant to support Mastriano, for example, simply stated his conservative views and emphasized his support for Trump. The ad said that Mastriano wanted to “outlaw abortion” and is “one of Donald Trump’s strongest supporters.” It also points out that Mastriano “wants to end vote by mail, and he led the fight to audit the 2020 election. If Mastriano wins, it’s a win for what Donald Trump stands for.”

It is not the Democratic Party’s fault that Republicans are attracted to this message, and nothing forced Republicans in Pennsylvania or Illinois (or Michigan or Arizona) to nominate the most MAGA candidates in the field. Republicans voters like Trump and they want Trumpist candidates, and where there’s demand, supply usually follows.

Which is to say that even with Democratic intervention in Republican primaries, the thrust of Biden’s story about the Republican Party still holds up. The party has been captured by extremists, and it’s up to the rest of us to ensure that it doesn’t win more power than it already has.

My Friday column was on President Biden’s Philadelphia speech, why I think the objections to it are misguided, and what, if anything, was missing from his argument that the MAGA movement is a threat to American democracy.

To divide against a radical minority that would attack and undermine democratic self-government is to divide along the most inclusive lines possible. It is to do a version of what Franklin Roosevelt did when he condemned“organized money,” “economic royalists” and the “forces of selfishness and lust for power.”

And in the latest episode of my podcast with John Ganz, Unclear and Present Danger, we discussed the 1992 crime thriller “Deep Cover” with special guest Adam Serwer of The Atlantic.

Adam Serwer on free speech for The Atlantic.

Jerusalem Demsas on “Black flight” for The Atlantic.

Rick Perlstein on the assault on public schools for The Forum.

Keisha N. Blain on objectivity in history for The New Republic.

Feedback If you’re enjoying what you’re reading, please consider recommending it to your friends. They can sign up here. If you want to share your thoughts on an item in this week’s newsletter or on the newsletter in general, please email me at [email protected] You can follow me on Twitter (@jbouie), Instagram and TikTok.

Photo of the Week

I went to a car show in nearby Culpepper, Va., and took a few photos. This was one of the better ones. I used Ilford black and white film and a Voigtlander 35mm lens.

I’ve been on a real grain salad kick — they’re easy to make for lunch — and this is the latest one. I have no real changes to make. I used more broccoli than the recipe called for and also added a bunch of cilantro. Personally, I would go heavy on the tahini, but I like tahini quite a bit. Your mileage may vary. Recipe comes from NYT Cooking.

Bring a medium pot of salted water to a boil. Add farro and eggs. Cook eggs for 6 minutes for very runny centers and 7 minutes for medium-runny. Use a slotted spoon to transfer eggs to a bowl of cold water. Let them sit for 2 minutes, then crack and carefully peel the eggs.

Continue to let the farro cook until done according to package directions, usually a total of 20 to 40 minutes. Drain farro.

As farro cooks, prepare the dressing: In a medium bowl, whisk together lemon juice, garlic and ¼ teaspoon salt. Let sit for 1 minute, then whisk in oil, a few drops at a time, until emulsified. Whisk in tahini and set aside.

Broil the broccoli: Position the rack underneath your broiler so that it’s at least 4 inches away from the heating element; heat the broiler.

On a rimmed baking sheet, toss broccoli with olive oil and soy sauce, then spread the pieces out into an even layer. Broil until slightly charred in spots, 2 to 5 minutes, watching closely so that it doesn’t burn all over (a few burned spots are OK). Let cool slightly, then toss with sesame oil and sesame seeds and cover to keep warm. (You can also roast the broccoli at 450 degrees for 8 to 15 minutes instead of broiling.)

Toss cooked farro with 5 to 6 tablespoons tahini dressing to taste, a large pinch of salt and a drizzle of olive oil. Taste, and add salt and olive oil if needed.

To serve, divide farro across 4 serving bowls and drizzle with remaining dressing. Top with turnips, and sprinkle them lemon juice and salt. Add broccoli and egg to the bowl and garnish with sliced scallions and more sesame. Serve immediately, with soy sauce, hot sauce, and-or sliced chiles on the side if you like.