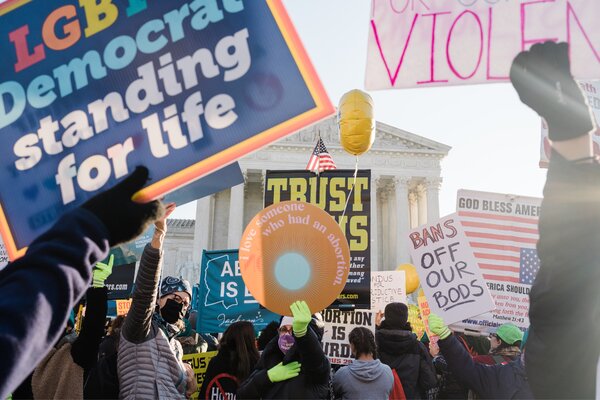 Re “Justices Indicate They Will Uphold Curb on Abortion” (front page, Dec. 2):

One hundred years ago, my grandmother died from sepsis after a botched street abortion. I am afraid that a reversal of Roe v. Wade will send us back to those times, leaving many women with no choice but to put themselves at great risk.

I hope the Supreme Court will not turn into a political entity and, in doing so, destroy not only the lives of many women but itself as well.

Justice Sonia Sotomayor was correct in questioning the ability of the Supreme Court to “survive the stench’’ that overturning Roe would result in. The Republican appointees seem determined to ignore the established law on the matter of abortion and impose their personal religious beliefs on Americans.

They will drag the Supreme Court into the morass of partisan politics. This disgraceful abrogation of the justices’ sworn duty to uphold the Constitution should be a warning that the Republican Party cannot be trusted to govern in a responsible manner.

In answer to Chief Justice John Roberts’s question about why 15 weeks wasn’t enough time to make the choice to have an abortion, I’d like to give a partial answer based on my experiences as a counselor.

An 11-year-old came in with her grandmother to learn that she was 18 weeks pregnant, not just gaining weight.

A 38-year-old unattached professional woman came in to have a pregnancy test (at 22 weeks) and faced the distressing fact for her that she was actually pregnant, that not having periods was not early menopause.

A wife and mother of three children learned that her husband not only was having an extramarital affair but also had two children by this other relationship. She realized that she could not cope with another child while she was making the decision to leave her husband and look for a job (some time after 15 weeks).

I learned to listen, to not judge, to allow a woman the autonomy to know what was best for her. For some, that was the decision to abort.

It certainly doesn’t give one confidence in the integrity of those justices who testified in their confirmation hearings or told senators that they would uphold precedents while on the court. They either had a wondrous enlightenment or outright lied to obtain their position. How sad.