Governor Cuomo and state lawmakers should pass a streamlined budget and fight their policy battles another day.

By The Editorial Board

The editorial board is a group of opinion journalists whose views are informed by expertise, research, debate and certain longstanding values. It is separate from the newsroom. 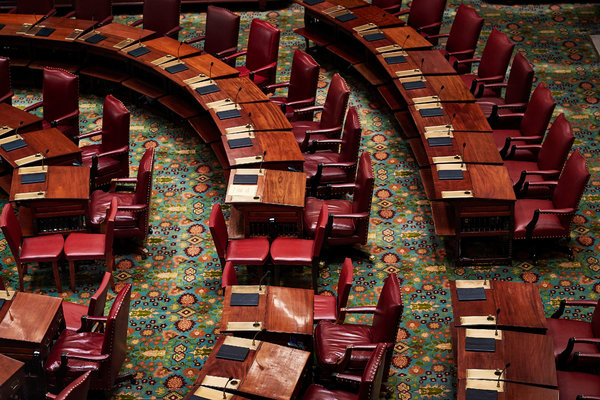 Gov. Andrew Cuomo’s leadership during the coronavirus pandemic has been disciplined and deft. May he and the Legislature approach this week’s budget negotiations with the same steady focus.

State spending for the coming fiscal year, expected to be roughly $175 billion, must by law be approved by midnight on Tuesday. This year’s budget season comes as the spreading virus has hobbled the economy and devastated state revenues. New York has already spent over $1 billion to fight the pandemic and is expecting a revenue shortfall of as much as $15 billion.

Typically, the budget is an annual festival of pork and a chance to change state law without having to bother with the inconvenience of actual lawmaking, which, unlike the usually secretive budget wrangling, unfolds in full public view.

The responsible thing would be for Mr. Cuomo; the Assembly speaker, Carl Heastie; and the Senate majority leader, Andrea Stewart-Cousins, to resist the temptation to slip complex policy measures into the budget, and approve a no-frills budget that shores up the core workings of government instead.

Thorny issues like bail reform are best left for another day, not shoved into the budget under the cover of night. Landmark criminal justice reforms, which went into effect on Jan. 1, banned bail for defendants charged with most misdemeanors and nonviolent offenses. Critics, including the state’s powerful law enforcement lobby, have pushed to scale back the reforms.

Of particular concern is a proposal, supported by Mr. Cuomo, that would allow judges to consider the dangerousness of a defendant when setting bail. New York law didn’t allow such discretion before the reforms; it’s difficult to see the wisdom in giving such powers to judges, who for decades set bail that poor New Yorkers couldn’t afford. If changes are made to the bail reforms, the budget is not the place to make them.

There will also be a push to revise the state’s Medicaid program. Though there are plenty of improvements to be made and cost savings to be found, it is vital that the public hospitals, which serve the poorest patients, not be harmed, especially as they fight a pandemic.

In general, policymaking is best done by the State Legislature and Mr. Cuomo through the normal lawmaking process, where public hearings can be held and bills can be examined before they become law. New York’s legislature can get back to work by holding a virtual session, just as Pennsylvania has already done and other states are planning to do. New York’s elected officials have important work to do, including a major expansion of the absentee voting program ahead of the June 23 primary. They could then move on to allowing New Yorkers statewide to vote by mail. The state can also look for ways to help residential and commercial renters suffering from the economic fallout of the pandemic.

For now, the state budget needs to keep the government running and provide immediate relief to New Yorkers coping with the crisis. The budget should include, for example, emergency funding for food banks and food pantries. These nonprofits tend to be staffed by seniors and volunteers, most of whom are now confined to their homes. In addition, the high demand for groceries has sent the price of wholesale foods soaring, forcing dozens of food pantries to close at a time when people need them the most.

New York is facing a dark hour. Albany needs to step up by delivering good government to the people it serves.