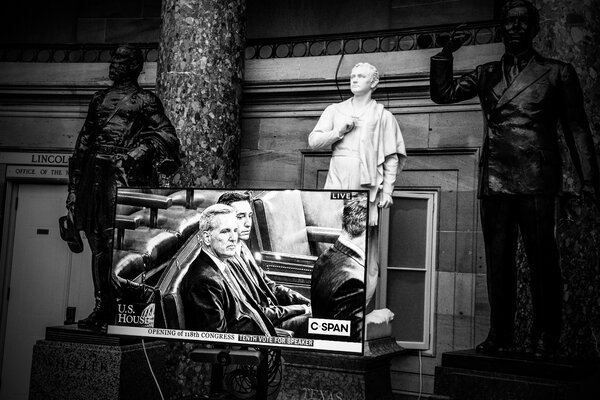 Did you miss the Republican Party that existed before Donald Trump came along? ‌Are you nostalgic for the days of John Boehner battling Tea Party rebels over the debt ceiling or the fiscal cliff, or Ted Cruz’s “plan” to defund Obamacare? Do you pine for the years when the crucial test of conservative purity was a commitment to an implausible deficit reduction plan, the good old days when empty suits and aspiring lobbyists battled libertarian ideologues and aspiring cable-news personalities for the chance to advance an agenda of mild austerity and business-friendly tax cuts?

Good news, then; those days are back. The failure of the “red wave” in the 2022 midterms and Trump’s subsequent diminishment have had a reverse-wave effect: It’s like watching a wall of water roll backward, exposing the old coastline, the political topography that the water covered up. Kevin McCarthy’s embarrassing struggle to claim the speakership, and the week of chaos in the House of Representatives, don’t properly belong to the Trump era. It’s the old world come again, the G.O.P. ancien regime with all its dysfunctions, stalemates and futility.

Not that the flood didn’t change the landscape. Some of the House Republicans who have bedeviled McCarthy are Tea Party throwbacks, but others are more Trumpian figures, creatures of right-wing celebrity and brands unto themselves. The would-be Republican populists in the Senate, figures like J.D. Vance, Josh Hawley and Tom Cotton, aren’t libertarians in the style of circa-2013 Ted Cruz, which may change the role the Senate plays in intra-Republican battles. The national party and its ambitious governors are now more likely to be fighting over cultural issues than fiscal ones. And Trump himself is hardly finished.

But in the negotiations over the speakership, it’s been clear that certain pre-Trump patterns are still resilient. On one side, embodied now by McCarthy and his allies, you have a G.O.P. establishment trying to run the House in a centralized fashion without any particular vision or agenda. On the other, in the factions that resisted his speakership, you have conservatives with a lot of legitimate complaints about process joined to a policy vision that’s mostly performative gestures and fiscal apocalypticism. The likely result, as in the Tea Party era, is a Congress incapable of governing save through last-minute brinkmanship and a conservatism that manifests itself in demands for implausibly sweeping budget cuts and not much else.

Part of Trump’s original success rested on the way he freed the Republican Party from this dead end, by resolutely refusing to campaign on the True Conservative™ catechism and elevating issues that mattered more to less-ideological conservatives and swing voters. He did all this in a demagogic style, but his promises — to bring back jobs lost to China and build new highways, to protect Social Security while ending illegal immigration — helped the G.O.P. slip out of its Obama-era trap, where the congressional party appeared to be obsessed with unpopular spending cuts but also was rarely capable of driving any bargains to achieve them.

For the House G.O.P. today, an equivalent escape is imaginable. Its majority could be used to pass a series of messaging bills on issues where conservatives have, or might have, an advantage with the public: a crime bill, a border security bill, a bill highlighting issues with military recruitment and readiness, reforms to academic funding and tax breaks and school standards that aim to weaken the elite-college cartel and influence the educational culture wars, some version of the pro-family policies that pro-life groups have pushed for in the wake of Dobbs. In each case the goal would be to position the party on ground where the concerns of activists and independent voters might overlap and set the G.O.P. up for success in 2024.

On fiscal issues, this kind of strategy would recognize the impossibility of either a grand bargain of the kind that eluded Boehner and Barack Obama or the forcing of meaningful fiscal changes on a Democratic-controlled Senate and White House. Instead it would propose budgets that mostly seek cuts in places that matter to Democratic interest groups and govern with deals that include some inevitable fakery and gimmicks, but basically just preserve the status quo.

Such deals are what will happen anyway: There will not be a radical change to our fiscal trajectory between here and 2024. The question is whether, along the way to that inevitable outcome, House Republicans present themselves as a plausible governing party, or whether their internal divisions yield both emptiness and chaos, letting Democrats and the Biden White House cast them as the party of sabotage, the enemies of economic recovery.

We’ll have more clarity when we see the price of victory in the speaker’s race or when the debt-ceiling negotiations get here. But we probably know the answer already.