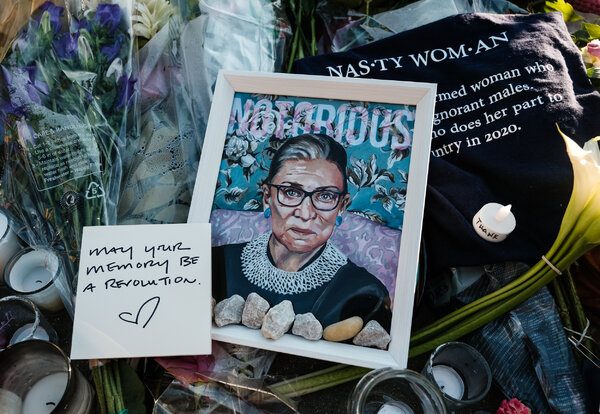 Re “Senators Line Up to Aid President in Nominee Fight” (front page, Sept. 22):

How do you spell hypocrisy? Let me count the ways: McConnell, Graham, Grassley, Romney. Their pretzel-like contortions to agree to quickly filling Ruth Bader Ginsburg’s Supreme Court seat are appalling.

We know where Mitch McConnell stood just four years ago with Merrick Garland; Lindsey Graham’s 2016 statement that a confirmation to the court should never be allowed in an election year rings hollow now; Charles Grassley, just this summer, declared that if he were chairman of the Judiciary Committee, he would not hold hearings on a Trump nominee before the election; Mitt Romney voted to remove Donald Trump during the trial in the Senate, but will now entertain voting for his nominee for the court.

It is very sad that we have so few heroes, people willing to demonstrate the courage of their convictions. Our country has suffered so many losses this year, and these Republican politicians continue to twist themselves into bizarre positions because they have no backbones, and so we have lost the ability to be shocked by their blatant hypocrisy.

The Story Behind the Mask

As any woman can tell you, the masks smear makeup. The president is afraid of makeup stains on his mask, and unsightly smears on his photographed face.

Rain is bad for hair; masks are bad for man makeup. Lessons for our time.

Sarah Crichton
Brooklyn
The writer is editor in chief of Henry Holt.

In my Seattle living room, as I read about the secret comments of oil executives, the wildfire smoke outside my window lies denser than any fog. All my doors and windows have been shut for three days, and the air quality makes it dangerous to venture outside. And I’m nowhere near any fire.

Mercifully, temperatures have come down. Like most other Seattleites, I have no air-conditioning and normally rely on night breezes to cool my home. The smoke has completely obliterated the sun, explaining the lower temperatures. It feels like a taste of the proverbial nuclear winter that wipes out first the plants and then the animals.

The executives, as they cavalierly discuss how to improve the industry’s image, are slowly killing us here in the West. They are worsening the climate disaster that is intensifying and lengthening our wildfire seasons.

We have been saying “wake up!” But those are the wrong words. These executives are awake and know what they are doing. They just have no corporate conscience.