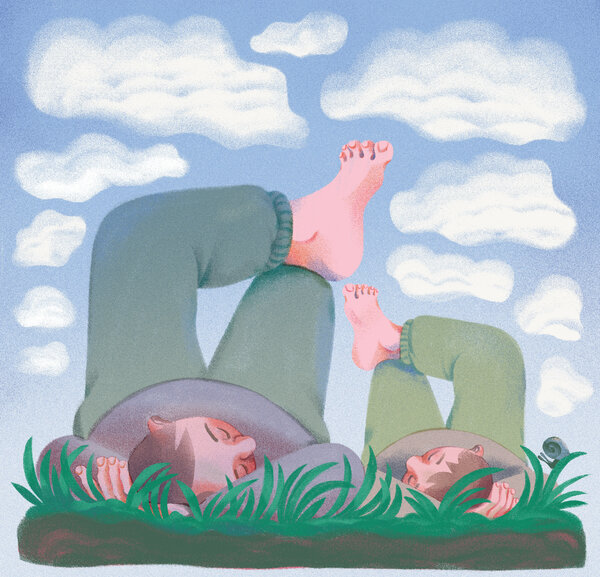 Elliot Kukla is a rabbi who provides spiritual care to those who are grieving, dying, ill or disabled. He is working on a book about the power of rest in a time of planetary crisis.

“Abba, I have an idea,” says my 3-year-old. “Put on your pajamas and your big mask, turn off the light, and get into bed.”

“That sounds great,” I say, honestly. I strap on my sleep apnea mask, change into soft, worn cotton PJs and crawl under the fluffy white duvet with him. Within seconds, he is lulled to sleep by the familiar gentle wheezing of my breathing machine. He knows the sight and sound of my sleeping body well; I have Lupus, an autoimmune disease that causes chronic fatigue. On a good day, I can get by on 10 hours or so of sleep. When my condition flares, sometimes for weeks on end, I need to sleep for much of the day and night.

Before my child was born, I was afraid that my fatigue would make it impossible for me to be a good parent. And it’s true that I am often juggling parenting needs and exhaustion. What I didn’t anticipate is that prioritizing rest, sleep and dreaming is also something tangible I can offer my child.

He sees me napping every day, and he wants in. We build elaborate nests and gaze out the window together, luxuriously leaning on huge mounds of pillows. Most 3-year-olds I know fight bedtime, but we snuggle under the blankets on cold winter evenings, sighing in synchronized delight.

America in 2022 is an exhausting place to live. Pretty much everyone I know is tired. We’re tired of answering work emails after dinner. We’re tired of caring for senior family members in a crumbling elder care system, of worrying about a mass shooting at our children’s schools. We’re tired by unprocessed grief and untended-to illness and depression. We’re tired of wildfires becoming a fact of life in the West, of floods and hurricanes hitting the South and East. We’re really tired of this unending pandemic. Most of all, we are exhausted by trying to keep going as if everything is fine.

Increasing numbers of people are refusing to push through this mounting weariness: There are currently 10 million job openings in the United States, up from 6.4 million before the pandemic.

This trend is being led by young people; millions are planning to leave their jobs in the coming year. Some middle-aged people decry the laziness of today’s youth, but as a chronically sick Gen X parent, and as a rabbi who has spent much of my career tending to dying people as their lives naturally slow, I am cheering young people on in this Great Resignation.

I have seen the limits of the grind. I want my child to learn how to be lazy.

The English word “lazy” is derived from the German “laisch,” meaning weak or feeble, and the Old Norse “lesu,” meaning false or evil. Devon Price, a sociologist who studies laziness, remarks that these two origins capture the doublespeak built into the concept.

When we call people lazy (including ourselves), we are often pointing out that they’re too tired and weak to be productive, while often simultaneously accusing them of faking feebleness to get out of work for malevolent purposes. As Dr. Price puts it, “The idea that lazy people are evil fakers who deserve to suffer has been embedded in the word since the very start.”

Shunning laziness is integral to the American dream. The Puritans who colonized New England believed that laziness led to damnation. They used this theology to justify their enslavement of Black people, whose souls they claimed to have “saved” by turning them into productive laborers.