Are we really going to do this again?

By Gail Collins and Bret Stephens

Ms. Collins and Mr. Stephens are opinion columnists. They converse every week. 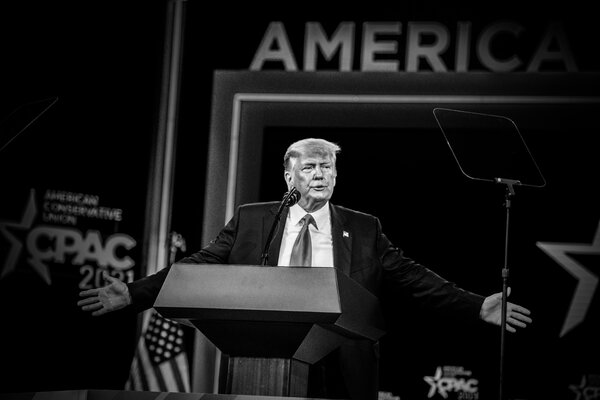 Bret Stephens: I don’t know about you, Gail, but watching Donald Trump’s speech at the CPAC conference in Orlando brought to mind that Michael Corleone line: “Just when I thought I was out, they pull me back in!” Here we were, barely a month into the Biden presidency, thinking we could finally put one American disaster behind us and have normal arguments about normal subjects, and now we may be staring at the worst sequel of all time.

The idea of another Trump presidential run is worse than “The Godfather Part III.” It’s “Dumb and Dumberer” meets “Friday the 13th Part VIII.”

Gail Collins: Well, he made it very clear he’s planning on a “triumphant return to the White House.” If you folks want to save the Republican Party, you’re going to have to take him on.

Bret: I’ve always wanted to write a musical called “The Mitt and I.”

Gail: Seeing Trump so clearly gearing up for another presidential run brought me back to an ongoing argument we’ve been having. Third parties. Am I to understand you’re a fan?

Bret: I’m not a fan of third parties that have no hope of winning elections and mainly serve as vanity projects for the likes of Ross Perot or Ralph Nader. And I’m obviously not a fan of extremist parties, whether they are of the George Wallace or Henry Wallace varieties.

On the other hand, I’d be a fan of a right-of-center party that can replace the current Republican Party, one that believes in the virtues of small government and personal responsibility without being nativist and nasty.

Gail: A lovely idea, but it’s not going to work. Nobody’s ever made it work. We’ve already seen an exodus of moderates and sane conservatives from the Republican Party, leaving it even loopier. And Trump is threatening to start a third party of his own, or at least he was, which would split things even more.

Feel free to daydream about the perfect, sane, moderate alternative Republican Party, Bret, but no chance.

Bret: Well, Abe Lincoln made it work by building a party on the wreckage of the Whigs.

Gail: Not going to interject that it took a civil war …

Bret: And there’s a political moment here. Gallup released a poll two weeks ago showing that 62 percent of Americans believe that “parties do such a poor job representing the American people that a third party is needed.” Among self-identified Republicans, the number was a notch higher: 63 percent. I think you are underestimating the number of people who feel they’ve been abandoned by a Republican Party that became a whacked-out cult of personality under Trump. What’s missing isn’t an agenda; it’s a galvanizing personality to lead a new movement.

Gail: Which galvanizing personality do you have in mind — Mitt Romney?

Gail: Um, no. But let’s look at now. Reforming the current Republican Party would mean a million grass-roots battles to retake the base. Understandable that people would just prefer to start a new movement — much less nasty infighting. Just sincere get-togethers of like-minded people, holding barbecues and giving interviews to folks like us who are desperate to think this could work.

But you could never create a massive 50-state party structure, with enough voters willing to make the very large decision of abandoning the party they’ve identified with forever.