Icebergs in the Southern Ocean.Credit…Photographs by Elizabeth Rush

Ms. Rush is a fellow at the Institute at Brown for Environment and Society.

On our first morning at the Thwaites Glacier in West Antarctica, the air was eerily still. The captain of our research icebreaker, encouraged by the calm, made a bold choice: Our ship would hold close to the ice shelf so that the sonar system would peer a little ways beneath it while generating a detailed map of the seafloor. The scientists on board, along with the writers like me, were the first people in the history of the planet to visit this part of Thwaites. Our task was to bring back as much information as possible about the place where ocean and ice meet.

The mood on the ship shifted into overdrive. Sleep took a back seat to data collection as autonomous vehicles surveyed the troughs where relatively warm water pushes beneath the ice, eating away at it from below. Coring devices carried back sediment the glacier spat out the last time it retreated, and even several Weddell seals were outfitted with transponders that recorded the temperature and conductivity of the water all around the unstable glacier. Every single bit of information that came on board taught us something about Thwaites’s past and present, which would help scientists to better predict its future.

If Antarctica is going to lose a lot of ice this century, it will likely come from Thwaites. If it disintegrated, it would be responsible for over two feet of sea level rise, and its collapse could destabilize the entire West Antarctic Ice Sheet, causing global sea levels to jump 10 feet or more. In terms of the fate of our coastal communities, this particular glacier is the biggest wild card, the largest known unknown, the pile of coins that could tip the scales one way or another. Will Miami even exist in 100 years? Thwaites will decide. 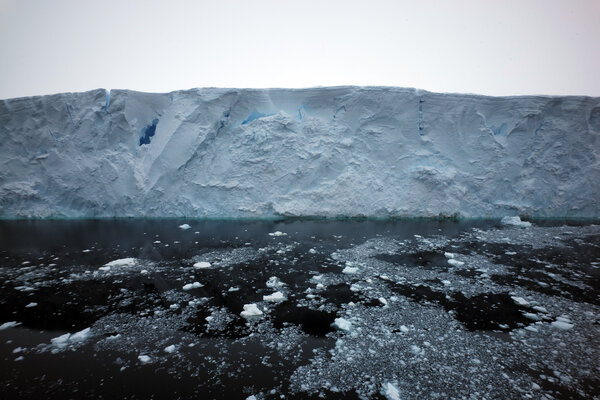 At least that is what many scientists think, which is why Jeff Goodell of Rolling Stone called Thwaites the “doomsday glacier” in 2017. But many of our predictions about just how much ice will enter the ocean from Thwaites and just how quickly this will occur are just that: predictions. That’s because before our mission, we had next to no observational data from this part of the planet, very few bits of raw information on which to base models.

When I read about the collapse of Antarctica’s great glaciers, I feel I am being encouraged to jump to a conclusion: that no matter what we do now, what lies ahead is bound to be worse than what came before.

This kind of thinking not only undermines our ability to imagine a climate-changed world that is more equitable than the one we currently live in; it also turns Antarctica into a passive symbol of the coming apocalypse. But what if we were to see Antarctica as a harbinger of transformation rather than doom? As an actor in its own right? This is why I applied to the National Science Foundation’s Antarctic Artists and Writers program and deployed to Thwaites in 2019. I wanted to wrap my mind around something it struggled to grasp: Antarctica has the power to rewrite all our maps.

The longer we worked in the big uncharted bay right in front of Thwaites, the more we realized how rare the placid weather that first day was — how rare and how lucky. Had we not been able to chart the ice shelf’s edge, the scientists might not have been able to accomplish their most ambitious goal: to send a submarine underneath Thwaites. In addition to mapping the seabed beneath the ice, this autonomous sub gathered information about the temperature and speed of the water flowing there. Like a primary care physician taking an ailing patient’s vitals, the aim was largely diagnostic.

This week Nature Geoscience published a paper analyzing the data from that submarine. The authors, many of whom were on board the vessel with me, suggest that sometime over the past couple hundred years, Thwaites retreated at two to three times the rate we see today. Put another way: At the cold nadir of the planet, one of the world’s largest glaciers is stepping farther outside the script we imagined for it, likely defying even our most detailed projections of what is to come.

To move at a glacial pace once signified a kind of mind-numbing slowness. But now the world has fallen out of sync with the metaphor. How do we go on when the very things we once depended upon have become undependable? This is the question that has haunted me ever since my return, the question that arises when I read the latest papers like the ones our mission produced.

As scientists begin to integrate the kinds of data we collected into their climate models, uncertainty in sea-level-rise projections will likely increase, simply because so much has been missing from these projections in the past. While what will happen in 2100 remains uncertain, what is happening all along our coastline at the moment is not.

I am not yet 40, and in my lifetime, climate change has gone from something that we thought would happen in the future to something happening now to something accelerating at such a surprising pace that it makes most of our feeble attempts to reckon with it outdated before they even get underway. This great acceleration has now reached all the way to Antarctica.

Things we used to classify as inert — ice shelves, glaciers, ice caps — are springing into action, demanding we recognize that here and there are not so distant after all. It took us nearly a month to arrive at the edge of Thwaites. By many measures, it is one of the most remote regions on earth. But despite the distance, what happens there is shaping us just as much as we are shaping it. If we can begin to recognize the agency of this faraway glacier, we will be one step closer to embracing the profound humility that climate change demands.

Elizabeth Rush is the author of the forthcoming book “The Quickening: On Motherhood and Antarctica in the 21st Century.”