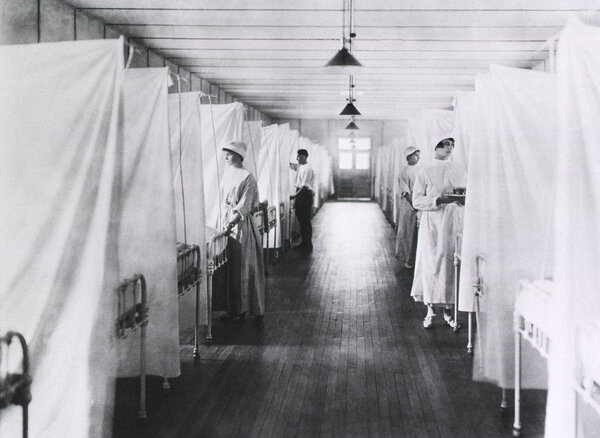 Mr. Barry is a distinguished scholar at the Tulane University School of Public Health and Tropical Medicine and the author of “The Great Influenza: The Story of the Deadliest Pandemic in History.”

Most histories of the 1918 influenza pandemic that killed at least 50 million people worldwide say it ended in the summer of 1919 when a third wave of the respiratory contagion finally subsided.

Yet the virus continued to kill. A variant that emerged in 1920 was lethal enough that it should have counted as a fourth wave. In some cities, among them Detroit, Milwaukee, Minneapolis and Kansas City, Mo., deaths exceeded even those in the second wave, responsible for most of the pandemic’s deaths in the United States. This occurred despite the fact that the U.S. population had plenty of natural immunity from the influenza virus after two years of several waves of infection and after viral lethality in the third wave had already decreased.

Nearly all cities in the United States imposed restrictions during the pandemic’s virulent second wave, which peaked in the fall of 1918. That winter, some cities reimposed controls when a third, though less deadly wave struck. But virtually no city responded in 1920. People were weary of influenza, and so were public officials. Newspapers were filled with frightening news about the virus, but no one cared. People at the time ignored this fourth wave; so did historians. The virus mutated into ordinary seasonal influenza in 1921, but the world had moved on well before.

We should not repeat that mistake.

True, right now we have every reason for optimism. First, Omicron cases are declining in parts of the country. Second, nearly the entire U.S. population will soon have been either infected or vaccinated, strengthening their immune systems against the virus as we know it now. Third, although Omicron is extraordinarily good at infecting the upper respiratory tract, which makes it so transmissible, it seems less able to infect the lungs than earlier variants so it is less virulent. It is entirely possible and perhaps even likely that, spurred by a better immune response, the virus will continue to decrease in lethality; indeed, there is a theory that the 1889-92 influenza pandemic was actually caused by a coronavirus called OC43, which today causes the common cold.

All of which makes overconfidence, indifference or weariness, after two years of battling the virus — and one another — a danger now.