CHRISTCHURCH, New Zealand — Growing up in a Kurdish family in the Ilam Province of Iran, I never expected my life to be affected by Australia’s history of white supremacy and settler colonialism. I had little awareness of Australia, a faraway country founded as a penal colony, and built on the massacres of its Indigenous people and on European migration. It was to be decades before I would hear about the White Australia policy, an official state immigration policy, in effect between 1901 and 1973, barring nonwhite people from immigrating to the country and intent on making Australia a white nation.

Yet the xenophobic legacy of the White Australia policy had a significant impact on the trajectory of my life and choked the lives of thousands of asylum-seekers and migrants who were held by Australia in offshore detention centers in its former colony Papua New Guinea and on the island of Nauru, a former protectorate.

After graduating from a public university, I wrote a bit for a Kurdish magazine in Ilam but mostly contributed to Kurdish publications outside Iran and advocated the preservation of Kurdish culture, which was seen as a threat by Iranian hard-liners. In 2013, the Iranian Revolutionary Guards Corps arrested some of my journalist colleagues. I was being followed and surveilled, and I went into hiding. The pressure was relentless; I had no choice but to flee Iran. 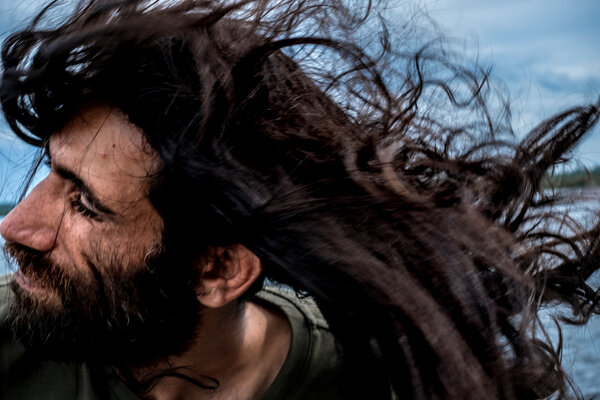 I arrived there during the same week that Kevin Rudd, then the prime minister of Australia, brought in a horrific immigration policy. On July 19, 2013, he announced that asylum seekers arriving on the Australian shores on a boat would never be allowed to settle in Australia and would be forcibly taken to Papua New Guinea and Nauru. Australia paid the government of Papua New Guinea to keep hundreds of asylum seekers like me imprisoned in a disused naval base on Manus Island.

When I set foot on the island I was confronted with a decrepit and filthy prison, and saw a group of refugees — men, women and children — who had been imprisoned there before us. They told us they had been there since 2012. A few days after we arrived they were transferred to Australia. We were their replacements.

I had no pre-existing knowledge of this prison and thought it was extraordinary after I found out that hundreds of people had been held there in 2001. The Australian government led by Julia Gillard, the prime minister between 2010 and 2013, had reopened it in 2012.

In 2013, we were forced to be the new subjects of this system of torture and banishment; a system by which the Australian government could control our bodies through contractors and guards but not be held responsible for the horrors that were visited upon us.

From the very beginning I realized that I was submerged in a tragedy, and that I had been thrown into an important chapter of Australia’s modern history. After struggling for six years to expose Australia’s detention system through writing hundreds of articles and a book and making a film — every paragraph, every image — created and transmitted text message by text message, shot by shot, on a smuggled mobile phone, I was eventually invited to participate in the 2019 WORD Christchurch Festival in New Zealand.

After a 36-hour flight, a remarkable journey, I arrived in Christchurch in beautiful New Zealand. During that first week in the country, I spoke at the Gus Fisher Gallery in Auckland. After my talk someone told me that his father wanted to see me. He insisted I visit their family. I went to their home and spoke to a 60-year-old man who said to me, “I also came here from Manus Island.”

It was unbelievable. He was an Iranian asylum-seeker who had been imprisoned on Manus Island in 2001. I was face to face with someone who was imprisoned there in 2001. It was as if two parts of Australia’s forgotten history were meeting in another land after two decades.

When I was at Manus Island, I saw small strips of fabric tied to the fences of our remote prison. The prisoners from 2001 had tied them there to symbolize the days of their captivity. There were also drawings and poetry written on the walls of the rooms. Those material remnants represented the human beings who had been there a decade before us.

Looking at those signs, I would try to imagine who those people were and wonder where they were. Now I was sitting across the table from one of them, hearing the accounts of the torture he and hundreds of others had to endure.

I met a man at a winery who told me he was among the 438 refugees who were rescued in 2001 from an Indonesian fishing boat stranded in the Indian Ocean by a Norwegian freighter, MV Tampa. The Australian government blocked the captain of the freighter from bringing the refugees onshore, sending troops onboard the ship.

What became known as “The Tampa Affair” intensified the brutal anti-immigrant policies that culminated in the offshore incarceration of people like me at Manus Island and Nauru. The people on MV Tampa were rejected by Australia and accepted by New Zealand. Two decades later, one of them was there opposite me. It seemed it was another part of the puzzle of Australian history.

Australia presents a beautiful and attractive image of itself to the world but the modern history of Australia is full of puzzles. The more you investigate the more absorbed you become in its history. My journey educated me in its hidden, darker history of prejudice and xenophobia. It is a history written in places like Manus Island and Nauru, and has its roots in its settler colonial origins.

The Stolen Generation is another chapter in this story; for many decades, thousands of Indigenous children were separated from their parents by the state and forced to assimilate into settler colonial society.

Twelve years have passed since 2008 when Mr. Rudd, during his first term as prime minister, apologized for Australia’s violent mistreatment of its Indigenous people, for stealing their children. Still a disproportionate number of children and youth incarcerated in the Northern Territory, in Queensland and elsewhere in Australia, are Indigenous.

Five years after apologizing to the Indigenous people, the same Mr. Rudd forcibly sent me and thousands like me to imprisonment at Manus Island. His government’s policies, hardened further by the three prime ministers who came after him — Tony Abbott, Malcolm Turnbull and now Scott Morrison — have resulted in many children being separated from their families for years.

The White Australia policy, which officially ended in 1973, continued under another guise. The colonial habit continues in Australia, with the government using Nauru and Papa New Guinea for exiling undesirable people. Australia’s presence on Manus and Nauru seems like a thread that leads you further into a dark cave with no end.

Australia is a beautiful country with great artists and writers but it is also a country where brutality and suffering are interwoven into the sociocultural fabric, ingrained in the soul of the nation. People like me represent a part of its unofficial history, a history that is full of trauma and violence.

Behrouz Boochani is the author of “No Friend but the Mountains: Writing From Manus Prison,” a co-director of the documentary film “Chauka, Please Tell Us the Time” and a senior adjunct research fellow with the Ngai Tahu Research Center at the University of Canterbury. This essay was translated from the Farsi by Omid Tofighian.