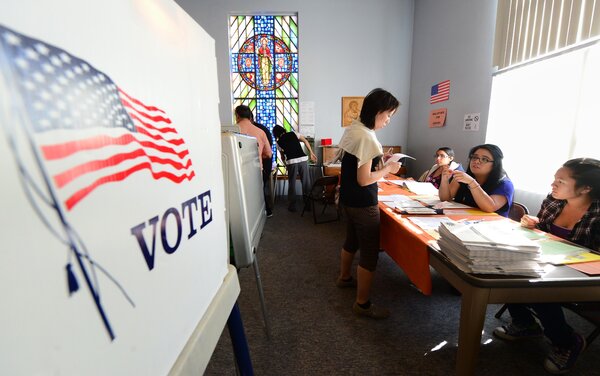 Over the past three decades, Asian American voters — according to Pew, the fastest growing group in the country — have shifted from decisively supporting Republicans to becoming a reliably Democratic bloc, anchored by firmly liberal views on key national issues.

The question now is whether this party loyalty will withstand politically divisive developments that appear to pit Asian Americans against other key Democratic constituencies — as controversies emerge, for example, over progressive education policies that show signs of decreasing access to top schools for Asian Americans in order to increase access for Black and Hispanic students.

There is little question of the depth of liberal commitments among Asian Americans.

“Do Asian Americans, a group marked by crosscutting demographic cleavages and distinct settlement histories, constitute a meaningful political category with shared policy views?” ask Janelle Wong, a professor of American studies at the University of Maryland, and Sono Shah, a computer scientist at the Pew Research Center, in their 2021 paper “Convergence Across Difference: Understanding the Political Ties That Bind with the 2016 National Asian American Survey.”

Their answer: “Political differences within the Asian American community are between those who are progressive and those who are even more so.”

In their paper, Wong and Shah note that “despite critical differences in national origin, generation, class, and even partisanship, Asian Americans demonstrate a surprising degree of political commonality.”

With regard to taxes, for example, “More than 75 percent of both Asian American Democrats and Republicans support increasing taxes on the rich to provide a tax cut for the middle class.”

In a 2021 paper, “Fault Lines Among Asian Americans,” Sunmin Kim — a sociologist at Dartmouth — found that Asian Americans took decisively liberal stands on Obamacare, admission of Syrian refugees, free college tuition, opposition to the Muslim immigration ban, environmental restrictions on power plants and government assistance to Black Americans. The only exception was legalization of marijuana, which received less support from Asian Americans than from any other group.

In an email, Kim cited the declining importance of communism as a key factor in the changing partisan allegiance of Asian American voters. In the 1970s and 80s, he said, “Taiwanese, Koreans, and Vietnamese chose the party that had a reputation of being tougher on communism. Obviously, it was the Republican Party. Chinese immigrants, many of whom retained the memory of the Cultural Revolution, were not too different.” After the 1990s, he continued, “the children of immigrants who grew up and received education in the United States replace the first generation, and their outlook on politics is much different from their parents. They see themselves as a racial minority, and their high education level pushes them towards liberalism on many issues.”

In short, Kim wrote: “the Cold War ended and a generational shift occurred.”

Despite many shared values, there are divergences of opinion among Asian Americans on a number of issues, in part depending on the country of origin. These differences are clear in the results of the 2020 Asian American Voter Survey, which was released in September 2020.