This question is at the heart of Brnovich v. Democratic National Committee. And it comes at a time when Republican lawmakers are unleashing a wave of “election integrity” legislation that would make it harder for people to vote in 2022 and beyond. Lawmakers in at least 43 states are pushing more than 250 bills that restrict voting in different ways. In Georgia alone, Republicans have introduced proposals to end automatic voter registration and early voting — bills that Georgia’s Republican secretary of state, Brad Raffensperger, characterized as “reactionary to a three-month disinformation campaign that could have been prevented.” In Brnovich, the court’s conservative supermajority could greenlight those measures by making it much easier for them to survive in court.

Democracy in this country is already fragile. This case could be a breaking point, if the court were to give a pass to what look like neutral laws that have the same practical impact as overtly discriminatory ones. That outcome would further empower politicians to make voting easier for people who support them and to ensure that casting a ballot is complicated and burdensome for everyone else.

The Voting Rights Act has long been a target of Republicans. In the early 1980s, a young Reagan administration lawyer named John Roberts, then a budding star within the conservative legal movement, argued that violations of the act should not be “too easy to prove.” In 1982, as Congress debated reauthorizing the act, he recommended against amending it to prohibit voting restrictions that disproportionately harmed racial minorities. 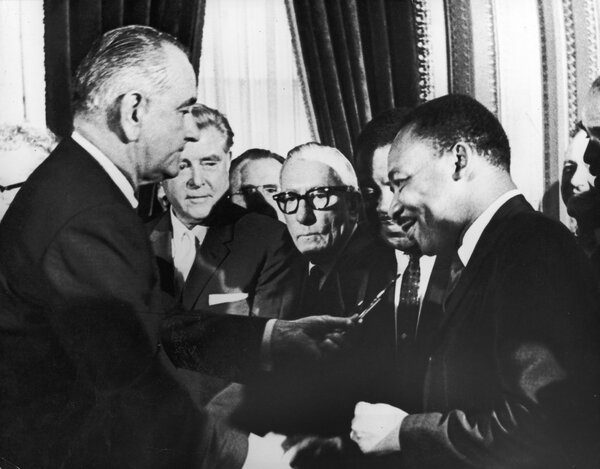 Some three decades later, in 2013, Chief Justice Roberts wrote the opinion in Shelby County v. Holder that dismantled one of the act’s key protections. Shelby County effectively ended the act’s vaunted “preclearance” system, which had required jurisdictions with lengthy track records of discrimination to obtain federal approval before amending their voting laws. Within hours after the opinion came down, Republicans in Texas began rolling out a previously blocked voter ID regime.

Without preclearance, Section 2 of the Voting Rights Act — which generally bars voting laws and policies that discriminate on the basis of race — became the primary mechanism for enforcing the act. But in Brnovich, the court could substantially weaken even the limited protections against selective disenfranchisement that Section 2 affords. The state of Arizona is asking the court to make it more difficult to prove that a law violates the act on the ground that it has the effect of disadvantaging voters on the basis of race.

That question might seem abstract or technical, but it will determine whether many laws in the latest wave of voter suppression succeed in denying people their right to vote.

Arizona is asking the court to hold that the Voting Rights Act does not prohibit voting restrictions that result in disparities between white voters and racial minorities unless the disparity is “substantial.” The Arizona Republican Party goes even further, asking the court to hold that policies do not violate the act so long as they offer “equal opportunities” to voters of any race. That would allow states to abolish voting practices that are disproportionally used by racial minorities, like early voting, so long as other voting practices (like same-day voting) remain theoretically available to them. Not to be outdone, Ted Cruz and 10 other Republican senators, including the Senate minority leader, Mitch McConnell, filed a brief arguing that Section 2 would be unconstitutional if the court interpreted it to prohibit voting laws and policies that resulted in disparities between white voters and voters of color.

Any one of these theories would greatly expand the kinds of voter suppression that survive judicial review. Consider Brnovich itself, which involves a pair of Arizona laws — one that throws out provisional ballots cast by voters who report to the wrong precinct on Election Day and another that prohibits community groups, volunteer organizations, political parties and the like from collecting and returning absentee ballots.

Both of these restrictions make it more difficult for minority voters to participate in democracy. Outside of Arizona’s most populous two counties, less than a fifth of the state’s Native voters have mail service at home, and those who live on reservations sometimes must travel two hours to the nearest mailbox. And because nonwhite Arizonans tend to live in urban areas where polling locations change frequently, they vote outside their designated precincts at a rate about twice that of white voters. One judge compared the task of finding polling places in Phoenix to “the changing stairways at Hogwarts, constantly moving and sending everyone to the wrong place.”

Under Arizona and the Arizona Republican Party’s theories, none of this really matters. Because the out-of-precinct law affected only a few thousand voters in 2016, the state argues, the disparity isn’t substantial enough to be illegal. And even though prohibitions on out-of-precinct voting and ballot collection selectively disadvantage minority voters, they still have the equal, theoretical opportunity to vote.

These theories would make a mockery of Section 2, which prohibited laws that have discriminatory effects on minority voters in order to ensure that legislators cannot disenfranchise those voters simply by avoiding making a record of their intent to do so. A Voting Rights Act that allows legislators to disadvantage minority voters through a million different laws that do not individually impose “substantial” disparities is no protection at all.

In states like Arizona and Georgia, even marginal shifts can change the results. Arizona and Georgia turned blue in the latest election in no small part because of record turnout, including by Native communities in Arizona who voted overwhelmingly to elect Democrats. It is no coincidence that Republicans are now attempting to roll back the reforms that helped fuel that enormous turnout.

By blessing the state’s logic in Brnovich, the Supreme Court could open the floodgates to efforts across the country to restrict the franchise.

An exacting standard that preserves Section 2 in form while making violations impossible to prove would leave nothing of federal protections of voting rights. And it would make our democracy poorer for it.

Leah Litman is an assistant professor of law at the University of Michigan and a co-host of the “Strict Scrutiny” podcast. Jay Willis is a senior contributor at The Appeal.