Good morning. Republicans say they will fill Ginsburg’s seat soon. A Mueller aide has regrets. And coronavirus cases are rising again in the U.S. 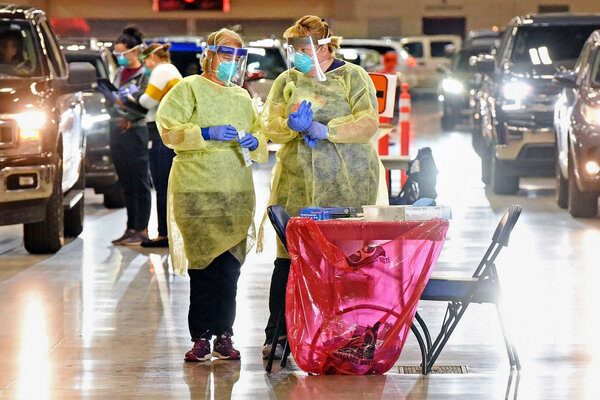 Public health experts have long been worried that the end of the summer — as some students returned to school and the weather cooled — would bring a surge in coronavirus cases.

That surge appears to have begun.

The number of new daily confirmed cases in the U.S. has jumped more than 15 percent in the past 10 days. It is the sharpest increase since the late spring, and it has arrived just before the official start of autumn, which is today.

Unlike the earlier summer surge in the U.S., this spike also coincides with a rising number of cases in other affluent countries, like Canada and much of Europe. The increases appeared to play a role in yesterday’s stock-market decline, as investors feared the need for new lockdowns.

In Britain today, Prime Minister Boris Johnson plans to to announce new restrictions on nightlife. In the Czech Republic yesterday, the health minister resigned. In Madrid, the authorities imposed new restrictions on almost one million residents. Across Europe, officials are hoping that these targeted restrictions will reduce new cases — and allow them to avoid imposing full lockdowns again.

The U.S. continues to be among the most vulnerable countries, because it never crushed the spread of the virus after the original outbreak. (In the chart above, you can see how much higher the red line, for the U.S., has been than the other lines since April.)

Coming weeks may bring new problems, too: The cooler fall weather will start to complicate outdoor socializing. “And if pandemic-fatigued families travel to spend the holidays together, it will get worse in late fall and winter,” The Times’s Jeneen Interlandi wrote in an article previewing the rest of the year.

There has been one big piece of good news. People infected today are roughly 30 percent to 50 percent less likely to die than those in the early spring, Ashish Jha, the dean of Brown University’s School of Public Health, estimates.

Still, the death toll is horrific. Today, the number of confirmed U.S. deaths will most likely surpass 200,000.

In other virus developments:

An officer at the National Institutes of Health will leave the job after a report in The Daily Beast revealed that he had been attacking the agency and one of its leaders, Dr. Anthony Fauci, in pseudonymous posts on a right-wing website.

The organization that runs a major college-admission test — the ACT — closed more than 500 testing centers this past weekend because of the virus or the recent wildfires. The closures left many students unable to take the test.

Several key Senate Republicans said that they would vote quickly to fill the Supreme Court seat vacated by Ruth Bader Ginsburg’s death. Mitt Romney, who has often stood against President Trump, said he would announce his plans after a Senate lunch today. Even with his support, though, Democrats would be a vote short of blocking a confirmation.

Mitch McConnell, the Senate’s Republican leader, said he would hold a vote “this year.” He did not say whether it would be before or after the election.

Later this week: Ginsburg’s family will honor her at a private ceremony Wednesday. She will then lie in repose outside the Supreme Court through Thursday, where the public can pay respects. On Friday, she will become the first woman to lie in state in the Capitol.

Trump said he would wait until after Ginsburg’s funeral to announce his nominee, adding that it would “probably” come Saturday.

Another candidate for the seat: Barbara Lagoa, a federal appeals court judge in Miami and the daughter of Cuban exiles, could bolster Trump’s appeal with Florida voters.

2. An inside critique of Mueller

The investigation team led by Robert Mueller didn’t do everything it could to determine what happened in the 2016 election, according to a new book by Andrew Weissmann, one of Mueller’s top deputies. (Here’s the Times review.)

The team shied away from subpoenaing Trump and taking other steps to scrutinize his finances out of fear that he would fire them, Weissmann writes. While he criticized the president as “lawless,” he also accused one of Mueller’s other deputies, Aaron Zebley, of being overly cautious, The Atlantic reports.

Police shootings are about twice as common in South Africa as in the U.S., and not many lead to widespread outrage. But a recent one has: Authorities have charged three officers in the shooting death of a 16-year-old boy with Down syndrome who, family members say, was visiting the store to buy cookies.

The shooting has prompted debates over race and police violence. The issue is complex in South Africa, where both the police and the population are mostly Black.

Electric vehicles have become almost as affordable as their gas-powered counterparts, but the United States still lags far behind Europe in the availability of charging stations.

Some protesters against police brutality are taking a more confrontational approach, increasingly moving to residential neighborhoods, where demonstrators with bullhorns shout for people to come “out of your house and into the street” and demonstrate support.

A Chinese court on Tuesday sentenced an outspoken Chinese property tycoon who had denounced the Communist Party leader, Xi Jinping, to 18 years in prison for corruption.

The Manhattan district attorney’s office suggested for the first time in a court filing that it had grounds to investigate Trump and his businesses for tax fraud.

A federal judge in New York ordered the Postal Service to reverse operational changes that have slowed mail delivery in recent months and to prioritize election mail.

Lives Lived: Defying intimidation by both the Ku Klux Klan and the local authorities, the Rev. Robert S. Graetz Jr. remained a rare, unbowed voice for desegregation among white people in Alabama in the 1960s. He took a direct role in the Montgomery bus boycott, which had been inspired by the courage of his friend Rosa Parks. He died at 92.

IDEA OF THE DAY: Kings, queens, popes and justices

Kings and queens have lifetime appointments. So do popes. But in advanced democracies, lifetime tenure for major government posts is exceedingly rare. Among the only examples: federal judges in the United States.

But lifetime tenure has downsides. It introduces an element of randomness to the makeup of federal courts, causing them to be influenced by judges’ life spans as well as election results: Should the future of, say, abortion policy really rest on whether Ginsburg lived to age 87 or 88? Lifetime tenure can also create pitched political battles because the stakes are so high.

“That this much depends on the life and death of a single person,” Heinrich Wefing, a journalist at the German newspaper Die Zeit, wrote this weekend, “brutally and clearly shows the antiquated nature of the almost late-monarchical and certainly dysfunctional U.S. constitution.”

Some legal experts have instead suggested term limits. Others argue that judges should have mandatory retirement ages, as they do in Britain. Most legal scholars agree that mandating any such changes would require amending the Constitution, which conditions judges’ tenure only on “good behavior.” And as long as one political party thinks the current arrangement benefits it, as Republicans do now, change will be difficult.

This spinach potato pie is versatile. It’s what the recipe’s author, the chef Yotam Ottolenghi, calls a “hugs-from-the-kitchen” sort of dish — comfort food that often comes in the form of a potato. Got extra herbs? Mint, parsley or dill all make great additions. Cubes of firm tofu can add some protein, too.

John Ames (Jack) Boughton, the delinquent son of a Presbyterian minister, is among the more memorable characters in recent American literature, writes Dwight Garner in his latest review. The character is the focus of “Jack,” the fourth novel in Marilynne Robinson’s series about the residents of the small town of Gilead, Iowa.

“I’m divided about Robinson’s novels. On the one hand, there’s ‘Gilead,’ which won a Pulitzer Prize in 2005,” he writes. “On the other hand, to open her other novels, including this one, is largely to enter a remote, airless, life-denying, vaguely pretentious and mostly humorless universe.”

It’s almost quaint to think of the beginnings of Instagram. The first photo to grace the platform featured a flip-flopped foot and a dog peering into the camera.

Fast-forward a decade, and Instagram’s DNA is in everything from the way people shop to the shifting nature of fame. It helped create the influencer economy and changed how celebrities interact with their fans. It can be a forum for social justice — or a tool for disinformation. And because it was designed for mobile devices from the start, the photo-sharing app helped turn smartphones into “adult pacifiers,” writes the journalist Jess Cartner-Morley in The Guardian.

BTS fans, rejoice: The K-pop band performed a Tiny Desk Concert, and it took about 25 minutes to break the NPR series’s record for most views on its first day.

You can find all of our puzzles here.

P.S. Brad Plumer, a Times climate reporter, will host a discussion with global leaders about how cities can achieve carbon neutrality. The event begins at 1:30 p.m. Eastern; R.S.V.P. here.

Today’s episode of “The Daily” is about swing voters and the Supreme Court. On the latest Book Review podcast, Ayad Akhtar discusses his new novel.

Lalena Fisher, Ian Prasad Philbrick, Sanam Yar and Amelia Nierenberg contributed to The Morning. You can reach the team at [email protected].