With the U.S. economy growing rapidly, millions of people have returned to work. Yet there is still one large group of Americans whose employment rates remain far below their prepandemic levels — mothers of young children.

Consider this data, which Moody’s Analytics compiled for The Morning: 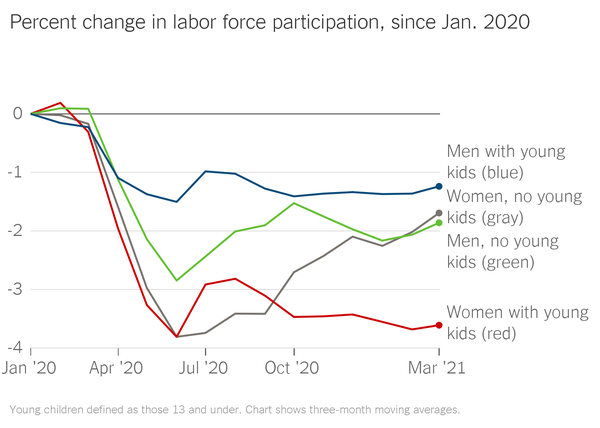 The explanation is obvious enough. Many schools and day care centers have not returned to normal operations. They are open for only a few hours a day, a few days a week or on alternating weeks, making it difficult for parents to return to a full-time job. And parenting responsibilities still fall disproportionately on women.

This situation is unlikely to change over the final month or two of the current school year. But it raises a major question about the start of the next school year, in August and September: Will schools fully reopen — every day, Monday through Friday, and every week?

If they do not and instead maintain a hybrid approach, it will exact a heavy cost on American women. The biggest issue of gender equality in 2021 may well be whether schools return to near-normal this fall.

“Fully opening schools is the single most important thing,” my colleague Claire Cain Miller, who writes about gender and work, told me. “Obviously, parents can’t get back to work without that.”

“It’s not enough to sort of open,” said Emily Oster, an economist at Brown University who studies parenting. “We are going to need to figure out how to make it possible to open normally.”

Is it safe to open?

Fortunately, the available evidence indicates that schools can safely return to normal hours in the fall. Nearly all teachers have already had the chance to be vaccinated. By August, all children who are at least 12 are also likely to have had the opportunity. (The Pfizer vaccine is now available to people 16 and up, and federal regulators appear set to approve it for 12- to 15-year-olds in coming weeks.)

Few younger children — maybe none — will have been vaccinated by the fall. But data from both the U.S. and other countries suggests that children rarely infect each other at school. One reason is that Covid-19 tends to be mild for younger children, making them less likely to be symptomatic and contagious.

Even more important, this coronavirus rarely harms children. For them, the death rate resembles that of a normal flu, and other symptoms, like “long Covid,” are extremely rare. Covid presents the sort of small health risk to children that society has long accepted without closing schools. A child who’s driven to school almost certainly faces a bigger risk from that car trip than from the virus.

Of course, the risk from Covid is not zero, which is why many school districts are still grappling with what to do in the fall. Covid has so thoroughly dominated our thinking over the past 14 months that many people continue to focus on Covid-related issues — even highly unusual or uncommon ones — to the exclusion of everything else.

Covid does present a minuscule risk to children. And there will also be some teachers and other school employees who choose not to be vaccinated or who cannot receive a vaccine shot for health reasons; some of them may need to remain home if schools reopen.

For these reasons, a full reopening of schools will bring real, if small, costs and complications. Communities will have to weigh those costs against the enormous damage that closed schools are doing to American women.

Hybrid schooling is also harming children, and schools should not continue it in the fall, David Zweig argues in New York Magazine.

Blue states have been the slowest to reopen their schools, and parental frustration presents a political risk for the Democratic Party, The Times’s Ross Douthat writes.

“Even in typical times, labor force participation of parents, particularly mothers, is lower here than in much of the rest of the developed world,” Mark Zandi, the chief economist at Moody’s Analytics, told me. He noted that President Biden’s economic plan tries to address this.

Cases and deaths continue to surge in India. But cases have remained stable for the past two weeks in Maharashtra, the state that includes Mumbai — a potentially encouraging sign.

India’s hospitals face an oxygen shortage. The U.S., Britain and France delivered supplies this weekend, while some Indians have turned to social media for help.

The U.S. is unlikely to reach herd immunity anytime soon, experts believe, but vaccinating the most vulnerable may be enough to restore normalcy.

Three thousand people partied without masks in a warehouse in England in a trial to see how social distancing could end.

Virus resources: Cases are rising in the Pacific Northwest and falling in the Midwest. Look up any state.

A Swiss billionaire has become an important donor to groups associated with Democrats.

A boat smuggling migrants to the U.S. hit the rocks in rough weather off San Diego, killing at least three people.

The boxer Félix Verdejo Sánchez is facing charges of killing a pregnant woman in Puerto Rico.

The Bureau of Alcohol, Tobacco, Firearms and Explosives will be key to Biden’s plans to rein in gun violence. Former officials say that the agency needs modernizing.

As police body cameras become commonplace, so does a debate over when to release footage.

After a white student quoted a racial epithet from a legal case, Black students at Rutgers Law School called for a policy on slurs — and apologies.

Four astronauts splashed down in the Gulf of Mexico early yesterday, concluding a SpaceX mission to the International Space Station.

Do you live in a political bubble?

The Times’s Gail Collins and Bret Stephens in conversation.

Are you not entertained? An $18 million refit will give tourists a gladiator’s view of the Colosseum.

Love and espionage: Alina López Miyares boarded a flight to Cuba and never returned. Is she a spy?

A Times classic: See how much hotter your hometown has become since you were born.

Lives Lived: After 33 years in the C.I.A., Jason Matthews became a best-selling author of spy thrillers, one of which was made into a movie starring Jennifer Lawrence. He died at 69.

The many lives of a single song

Musicians have been rerecording popular songs — and sometimes sending them back to the top of the charts — for decades. But in recent years, many artists have been releasing remixes of the same song.

Consider the Florida rapper SpotemGottem: More than a year ago, he released the song “Beat Box.” A remix, “Beat Box 2,” arrived in December, followed in short succession by “Beat Box 3,” “Beat Box 4” and, last month, “Beat Box 5.” Combined, listeners have streamed the songs hundreds of millions of times.

The strategy is to “extract maximum value from a single song,” Jon Caramanica writes in The Times. He calls it “an elegant promotional solution: If people decide they want to listen to your song, simply give them more of it.” Lil Nas X similarly kept his breakout song, “Old Town Road,” at the top of the Billboard Hot 100 for a record-breaking 19 weeks in 2019, partly through remixes, which has helped him sustain stardom despite not having yet released a full-length album.

Often, these remixes can be substantial, adding a new layer to the song. But sometimes they’re a slightly altered version that is more obviously a ploy to game streams. “For younger artists, especially those who catch fire on TikTok, lengthening the life of a song,” Caramanica writes, “is crucial to setting a foundation for a chance at something beyond a one-viral-smash career.” — Sanam Yar, Morning writer

Bibimbap, a Korean mixed rice dish, is a kaleidoscope of flavors and textures. Make it after reading Eric Kim’s essay about cooking with his mother for a year.

These horror movies offer scares from around the world, including an Indonesian witch and an Irish vampire.

The pangram from Friday’s Spelling Bee was exultant. Here is today’s puzzle — or you can play online.

Here’s today’s Mini Crossword, and a clue: Prepare for a race (five letters).

If you’re in the mood to play more, find all our games here.

Claire Moses, Ian Prasad Philbrick, Tom Wright-Piersanti and Sanam Yar contributed to The Morning. You can reach the team at [email protected].