We’re covering how tragedy unfolded in the Italian region of Bergamo, the latest from the conflict in Tigray and mass protests over France’s new security bill.

How an Italian province became a virus tragedy 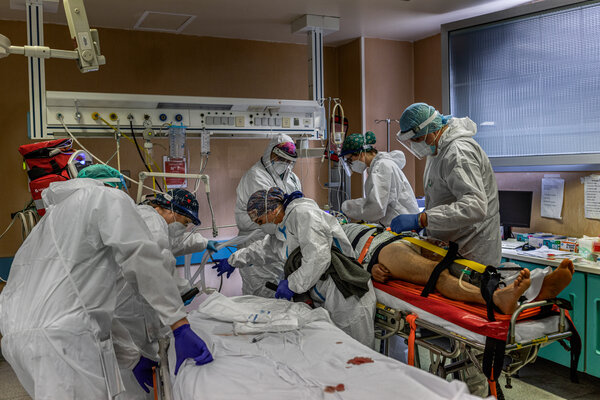 In the spring, the northern Italian province of Bergamo became one of the deadliest killing fields for the coronavirus in the Western world. Amid inconceivable suffering and to a soundtrack of ambulance sirens, emergency medical workers peeled parents away from children, husbands from wives, grandparents from their families.

The question of how such a tragedy could unfold in a wealthy, well-educated province of just more than a million, with top-level hospitals, has remained an uneasy mystery, a blood stain that the Italian government prefers to avoid as it points with pride to Italy’s success in flattening the first wave of infections.

A Times investigation found that faulty guidance and bureaucratic delays in shutting down the region rendered the toll far worse than it had to be.

Lockdowns in Britain have exposed the gender gap in British sports. In English youth soccer in particular, only a handful of clubs have kept training open for future female professionals, while boys at the same level play on.

Turkey is showing a sharp rise in infections, with intensive care units in Istanbul and the capital, Ankara, running at 75 percent capacity.

British regulators may approve vaccines from AstraZeneca and Pfizer-BioNTech weeks before the U.S. does. Hospital executives have been told to be “ready to start vaccinating from the beginning of December.”

The Ethiopian government claimed victory in its conflict with the region of Tigray on Saturday, after a daylong series of artillery strikes against the regional capital, Mekelle. With communications shut off, there was no way to independently confirm the claim.

The shelling of the city came two days after Ethiopia’s prime minister, Abiy Ahmed, had ordered the start of what he called the final phase of an operation aimed at removing the northern state’s ruling Tigray People’s Liberation Front, which was until recently the dominant power in the national government.

Repercussions: Testimonies from aid workers returning in recent days revealed that the humanitarian situation “still remains dire,” said Catherine Sozi, the U.N. resident coordinator in Ethiopia. “No cash, no fuel, no telecoms,” she added, noting that access to health care, food and clean water also remained an issue for people in Tigray.

Related: In countries such as Ethiopia, Tanzania and Uganda, entrenched leaders are taking advantage of coronavirus restrictions and a world distracted by the pandemic to jail, exile or silence prominent political opponents.

The streets of French cities such as Paris and Lyon were thronged with protesters on Saturday as media organizations and human rights groups held rallies to protest a security bill that would restrict sharing images of police officers and strengthen government surveillance tools.

Many of the demonstrators consider the bill a drift toward repression in government policy that could curb freedom of the press and limit police accountability. For some, it is further evidence of the government’s slide to the right.

Tensions in France have been rising over President Emmanuel Macron’s broader security policies, which opponents say increasingly restrict civil liberties. The frictions have grown in part in the wake of a string of Islamist terrorist attacks over the past few months.

Official remarks: Mr. Macron said on Friday that video images showing the recent beating of a Black man by police officers “shame us.” He asked the government to quickly come up with proposals “to reaffirm the link of confidence that should naturally exist between the French and those who protect them.”

If you have 10 minutes, this is worth it

The closed circles of literary France

A national scandal around the French author Gabriel Matzneff, above, who faces a police investigation after a woman published a bombshell account of their sexual relationship when she was underage, has exposed how clubby Parisian elites long protected, celebrated and enabled his pedophilia.

While the fallout has rippled through France, the insular world that dominates its literary life remains largely unscathed, demonstrating just how entrenched and intractable it really is.

Corporate social responsibility: A proposal in Switzerland to make multinational companies headquartered in the country liable for human rights violations and environmental damage committed by their subsidiaries abroad failed in a referendum on Sunday.

Maradona: The Argentine authorities searched the home and offices of Diego Maradona’s personal doctor as part of an investigation into the soccer star’s death last week.

Incoming U.S. cabinet: President-elect Joe Biden is set to appoint the rest of his administration’s top officials in the days and weeks ahead. Here’s a look at some of the contenders.

Iran’s next move: A series of covert attacks in Iran, culminating with the killing of the country’s top nuclear scientist, has left the country debating how to respond at a delicate moment as the U.S. transitions to a new administration.

Snapshot: Despite a dark end to a dismal year, holiday window displays in New York City offer a hint of sparkle for passers-by. Macy’s windows, above, are devoted to thanking essential workers, while Bergdorf Goodman’s are bold, simple and designed to be “read” even from across the street.

Bumper crop: Ukraine has seldom seen so many mushrooms. The fungi are a staple in the country, and some families have begun selling them as a way to stay afloat during the pandemic. “Mushrooms saved so many people this year,” one mushroom hunter told The Times.

Lives lived: Tony Hsieh, the technology entrepreneur who built Zappos into a $1 billion internet apparel powerhouse and who developed a philosophy of business around the idea that happy employees were the conduit to satisfied repeat customers, died at 46 on Friday.

What we’re listening to: “Seeing White,” a series on the podcast Scene On Radio. “I’m late to this one, which started in 2017,” writes the Briefings editor, Andrea Kannapell. “But it’s reshaping the way I understand race as thoroughly as Isabel Wilkerson’s book ‘Caste,’ or Walter Johnson’s history of St. Louis, ‘The Broken Heart of America.’”

Cook: This autumnal galette is filled with caramelized onions, Gruyère cheese and lots of cracked black pepper. Serve it alongside a salad or steak.

Read: “Tokyo Ueno Station,” a novel by Yu Miri whose main character is the ghost of a homeless construction worker, won the National Book Award for translated literature.

Do: Channel the soldiers of World War I by pressing wildflowers or other fresh botanicals to send a bit of your landscape to a loved one.

We’re happy to share more ideas from our At Home collection on what to read, cook, watch, and do while staying safe at home.

Reporting on ‘The Crown’

Since the fourth season of Netflix’s reconstruction of the life and times of Queen Elizabeth II was released on Nov. 15, more than three million readers have devoured articles in The Times about “The Crown,” including one centered on whether any members of the royal family watch.

Eleanor Stanford, a senior editor on the Culture desk who is based in London, weighed in on why the royals captivate viewers. Here’s an excerpt.

Millions of people have read the dozen stories you’ve published about the show over the past few weeks. Did you anticipate that much interest?

Eleanor: “The Crown” has become a television juggernaut in the style of “Game of Thrones,” albeit on a smaller scale. And we’re all desperate for counterprogramming about anything not related to the election or the pandemic. This is also a really juicy season and, since it covers the 1980s, most of the people involved are still alive. It’s this escapist show that’s also true — you can Google things afterward to see what actually happened.

The show isn’t a documentary, of course, but is it generally a good guide to British history?

It does give viewers quite a good grounding in elements of 20th-century British history, like the I.R.A. and the Falklands War. I’ve talked to a lot of people in England who’ve watched it and then been like, “Oh, shoot, I should’ve known that.”

Would people still be going crazy for streaming series like “The Crown” if we weren’t all stuck at home?

“The Crown”? Yes. It’s a well-produced, beautiful, engaging show. “Tiger King” and “Emily in Paris?” I don’t think so.

Thanks for starting your week with The Times.

Thank you
To Theodore Kim and Jahaan Singh for the break from the news. You can reach Natasha and the team at [email protected]

P.S.
• On the latest Book Review podcast, Book Review editors discuss the 10 Best Books of 2020.
• Here’s our Mini Crossword, and a clue: Easiest parts of a jigsaw puzzle (five letters). You can find all our puzzles here.
• The word “cheerlebrities” — cheerleaders with large social media followings — appeared for the first time in The Times on Sunday, as noted by the Twitter bot @NYT_first_said.
• Jeanna Smialek, who covers the Federal Reserve and the economy for the Times, discussed her reporting role and part-time M.B.A. studies with the N.Y.U. Stern School of Business’s student newspaper.