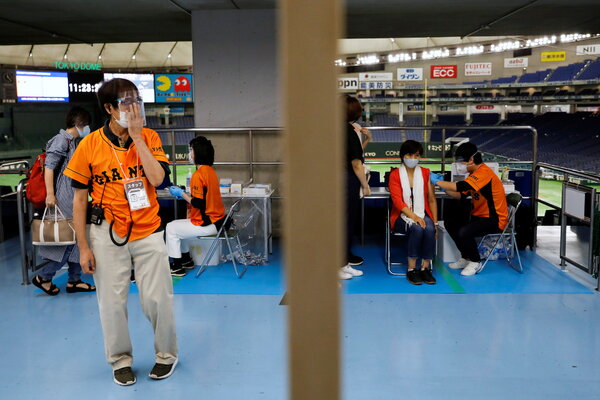 The U.S. falls behind on vaccinations

As of Thursday, the U.S. ranks last among the Group of 7 nations for the percentage of its population that has received at least one dose of a coronavirus vaccine, just behind Japan. Some 62.16 percent of Japanese people were at least partly vaccinated, compared to 61.94 percent of Americans. Canada leads the rankings.

President Biden last week ordered sweeping vaccine mandates covering around 100 million people, including federal employees, health care workers and many other private-sector workers. Republican governors reacted angrily to the mandates, declaring them “terrifying” — even though many G.O.P. states have some of the strictest vaccination requirements for children.

Agencies that required vaccines before Biden’s push are seeing early successes. Since the Pentagon announced last month that active-duty military personnel would be required to be vaccinated, for example, the percentage of service members who have gotten at least one shot has risen to 83 percent from 76 percent.

Here are the latest updates and maps.

Denmark has lifted its final coronavirus restrictions. As of Saturday, about 76 percent of the population had received one dose of a vaccine and 73 percent were fully vaccinated.

Berlin cautiously reopened its famous nightclubs, after a discothèque sued the city over its indoor dancing ban.

Leaders in Australia, Hong Kong, Indonesia, Japan, Malaysia, Singapore, South Korea and Vietnam recently announced they would soon begin easing restrictions, even as cases are rising in some areas.

A legacy of torture

Twenty years on from Sept. 11, the U.S. is still grappling with the consequences of brutal interrogations carried out in the name of national security. These torturous techniques, which studies have concluded were fruitless or even counterproductive, have long since been abandoned in the country — but their legacy is complex and multifaceted.

The choice to turn to government-sanctioned torture remains a stain on the country’s reputation, undercutting its authority to confront repression elsewhere. Even today, some former Bush administration officials traveling to Europe risk being questioned by investigators invoking the U.N. Convention Against Torture.

The use of torture is complicating efforts to bring the men who are accused of plotting the Sept. 11 attacks to justice. Over nearly a decade of court proceedings, the attacks have been rarely mentioned. Instead, defense lawyers have effectively managed to put the C.I.A. on trial as they have systematically sought to exclude evidence against the men as a product of torture.

Present day: After his first meeting with President Biden in June, Vladimir Putin, the Russian president, reminded journalists that the prison at Guantánamo Bay remained open and that the C.I.A. had carried out torture in secret foreign prisons. “Is that human rights?” he asked.

First person: Mohamedou Ould Slahi was detained at Guantánamo in 2003, where he was subjected to physical and psychological torture. Most distressing of all, he said, were the attempts to threaten him into making a false confession. “I remember telling them: ‘This is unfair. This is not fair,’” he recalled. The interrogator, he said, responded: “I’m not looking for justice. I’m looking to stop planes from hitting buildings in my country.”

While visiting Hungary on Sunday, Pope Francis urged Catholic bishops to embrace diversity and send a message to Viktor Orban, the country’s hard-right, anti-migrant leader, that God is not a strongman who silences enemies and that religious roots, while vital for a country, also allow it to open up and extend “its arms toward everyone.”

The Hungarian leader posted photographs from his 40-minute meeting with Francis on Facebook, writing that he had asked the pope “not to allow Christian Hungary to perish.” Orban has portrayed himself as a defender of Christian Europe, and he has ramped up connections to church traditionalists ahead of expected elections in April.

In Francis’ public remarks, he seemed to warn against the conflation of religion and politics. “The difference is not between who is religious or not, but ultimately between the true God and the god of ‘self,’” he said. “How distant is the God who quietly reigns on the cross from the false god that we want to reign with power in order to silence our enemies.”

Details: The seven-hour visit was Francis’ first international trip since he underwent major surgery this summer. It opened a four-day visit to neighboring Slovakia.

Armin Laschet, the chancellor candidate for Angela Merkel’s Christian Democratic Union party, is flagging in the polls in the final days before Germany’s election.

When the Taliban took control in Afghanistan, international groups froze aid to the country, pushing its health care system to the brink of collapse.

Iran has reached a last-minute deal on allowing nuclear monitoring, considered to be a minimum requirement for the resumption of talks on restoring the 2015 Iran nuclear deal.

The Times obtained footage and witness accounts to show how the U.S. military launched a drone strike that killed 10 people in Kabul on Aug. 29 without knowing whom it was hitting.

The 20th anniversary of the Sept. 11 attacks rang out with solemn remembrance in the U.S. on Saturday. President Biden and Barack Obama and Bill Clinton attended a name-reading ceremony at the site where the towers once stood.

Texas’ highly restrictive abortion law has flummoxed the courts and enraged abortion rights supporters. Here’s the little-known lawyer behind it.

The London department store Selfridges now hosts weddings, part of a broad effort by brick-and-mortar retailers to survive the competition of online sales.

After a decades-long standoff with the last resident of a communal apartment, the Joseph Brodsky Museum has opened in the poet’s shared home in St. Petersburg, Russia.

Workers at a British golf course found a waterlogged coffin containing the remains of a man who archaeologists said was buried about 4,000 years ago.

Emma Raducanu, an 18-year-old Briton with a radiant smile, stormed from obscurity to win a straight-set victory at the U.S. Open final on Saturday, captivating the British public.

The actor Stephen Fry was among many celebrating her win, saying on Twitter: “Yes, it may be ‘only’ sport, but in that ‘only’ there can be found so much of human joy, despair, glory, disappointment, wonder and hope. A brief flicker of light in a dark world.”

Nino Castelnuovo, the Italian actor who found wider fame with the French New Wave musical “The Umbrellas of Cherbourg,” has died at 84.

In a 1999 interview, Castelnuovo spoke wistfully of the golden age of Italian cinema, in which he had made his debut: “We’ve lost sight of just how much talent we Italians have,” he said. “We’re a country of marvelous people. Marvelous in the sense that, without our imaginations, we cannot live. We’re not very good realists, which makes us very imaginative people.”

Return of the Met Gala

The Met Gala is back. The exclusive black-tie extravaganza — and fashion’s event of the year — is tonight, kicking off the opening of the Costume Institute’s annual blockbuster show at the Metropolitan Museum of Art in New York. This year’s theme: “American Independence.”

Why does it matter? “It’s reality TV at its most glamorous, the All-Star Game of Entrances,” writes Vanessa Friedman, The Times’s chief fashion critic, in this explainer. “And let’s be honest with ourselves: We could all use a little live entertainment after the last year.”

For more on American style, read this essay by the novelist Torrey Peters, accompanied by works from 10 photographers who traveled across the U.S. looking for the country’s common language of fashion.

Store-bought dough gets this Georgian cheese bread boat on the table in just 45 minutes.

Oscar Isaac, Tiffany Haddish and Willem Dafoe star in “The Card Counter,” a heady thriller about betting on life.

In “Beasts Before Us,” the paleontologist Elsa Panciroli homes in on the small mammals that might have been our most important ancestors.

That’s it for today’s briefing. See you tomorrow. — Natasha

P.S. A hidden haiku from The Times’s coverage of a boxing match for which Donald Trump provided live commentary: “Of course it was a / circus — the kind that makes sense / in boxing these days.”

The latest episode of “The Daily” is on conspiratorial thinking after Sept. 11.

You can reach Natasha and the team at [email protected].