By Whet Moser and Amelia Nierenberg

We’re covering the landmark U.S. pandemic relief plan, the 10th anniversary of the Fukushima disaster and Russia’s decision to slow access to Twitter. 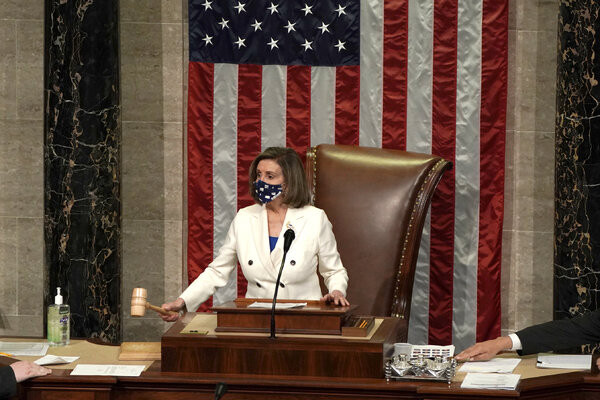 The American Rescue Plan will send direct payments of up to $1,400 to Americans and extend a $300-per-week unemployment benefit until early September, as well as substantial benefits for low-income Americans, including an expanded child tax credit. It also includes provisions to address the pandemic, such as testing, contact tracing and genomic sequencing.

The measure passed by a vote of 220-211, clearing it for Mr. Biden’s signature and cementing one of the largest injections of federal aid since the Great Depression. Republicans have attacked the measure as wasteful and excessive, but 70 percent of Americans support the package, according to a Pew poll.

Related: The Biden administration intends to secure an additional 100 million doses of Johnson & Johnson’s Covid-19 single-shot vaccine by the end of this year, with the goal of vaccinating children and, if necessary, administering booster doses or reformulating the vaccine to combat emerging variants.

Internal documents show that the European Union has exported millions of doses of vaccines, including eight million to Britain, while its countries struggle with supply.

A protest in Greece turned violent as anger grew about tactics used by police officers who were enforcing coronavirus lockdown restrictions.

A decade after an earthquake and tsunami killed more than 19,000 people and triggered a catastrophic nuclear meltdown that forced an exodus of 164,000 in northern Japan, some former residents have started to return to the original evacuation zone.

What they’ve found often feels more eerie than welcoming: deserted apartment blocks, demolished houses and empty foundations, and rows of large green mounds that serve as temporary waste sites for radioactive soil. Fukushima Prefecture’s population has shrunk by 10 percent since 2011, and nearly a third of its population is over 65. Rina Tsugawa, a 22-year-old nurse, is returning home to help the aging residents who helped raise her.

Deep anxiety remains throughout the country. The government is seeking localities to store spent nuclear fuel. Only two have volunteered, and in one of those, Suttsu, an ailing fishing town on the island of Hokkaido, the mayor’s house was firebombed. Of the 50 nuclear plants shut down after the Fukushima disaster, only nine have restarted, leaving profound implications for the country’s ability to power itself.

Coming home: 71-year-old barber Tsunao Kato, who reopened his third-generation Fukushima shop before its running water had been restored, told our reporters that it’s hard for many older, longtime residents to imagine living anywhere else. But, he added, the threat of lingering radiation feels less immediate than that of the coronavirus.

Chinese leaders are freeing up tens of billions of dollars for the country’s tech industry to borrow. With a planned 7 percent boost to research and development every year for five years, China’s ambition is to be beholden to no one — especially the United States.

The Trump administration angered the Communist Party leadership by restricting access to American technology for corporate giants like Huawei, and Beijing anticipates that under President Joe Biden, the U.S. will continue to challenge China’s technological rise. The first in-person diplomatic encounter under the Biden administration is scheduled for March 18 in Anchorage.

One sector that China has struggled with is microchips. Bewilderingly complex production has stymied businesses, and the country only produces 15.9 percent of its chip demand domestically. Last week, China’s premier, Li Keqiang, detailed proposals to accelerate semiconductor production to meet that demand, part of a larger strategy that includes processors, cloud computing and AI.

Related: China and Russia announced Tuesday that they have agreed to jointly build a research station on or around the moon, setting the stage for a new space race.

Australia — thanks to strict travel policies and aggressive testing — has effectively stamped out the virus. Life ticks on normally. People dance at parties. They even eat finger food.

That, along with generous subsidies from the government, has the country’s film industry humming along at an enviable pace compared with other locales. Above, Village Roadshow Studios on Australia’s Gold Coast. Hollywood directors and actors have trekked down under, often posting enviable (and perhaps tone deaf) photos of their parties in pandemic-free paradise. Some Australian and American fans are none too impressed.

Russia Twitter: The government said it was slowing access to Twitter, accusing the social network of failing to remove illegal content. The restrictions are a clear escalation of a sustained offensive against American internet companies that have long provided a haven for freedom of expression.

America’s Cup: The winds are blowing at the international sailing race, held this year in Auckland, New Zealand. After the first two legs, the Cup holder, New Zealand, and the Italians are tied at one race each.

Snapshot: Above, the banquet hall at Jing Fong, a mainstay of Manhattan’s Chinatown that closed Sunday. The shuttering was the latest blow to one of New York’s most famous immigrant neighborhoods, which has been battered by the pandemic and faces an uncertain recovery.

What we’re reading: This Irish Times article on the Meghan and Harry interview is a decidedly Irish take on their revelations about racism and the royal family.

Read: Jessica Winter’s second novel, “The Fourth Child,” centers on the adoption of a child from a Romanian orphanage by a religious American family. Here’s our review.

Do: If you’re planning a move, you can do a lot of prep work with 3-D models and augmented reality apps to lay out your rooms, select a color scheme and even sample virtual furniture. Here’s a guide.

Change your routine. At Home has our full collection of ideas on what to read, cook, watch, and do while staying safe at home.

China’s crackdown on Hong Kong has happened swiftly: A rising power has asserted its authority over a global financial capital, through a harsh national security law enacted last summer. Our China correspondent Vivian Wang spoke to The Morning newsletter about the new Hong Kong. Here’s an excerpt.

Why did Xi Jinping and the rest of China’s leadership decide to act now?

Vivian: The short answer is the enormous antigovernment protest movement in 2019, in response to a government proposal that would have allowed extraditions to mainland China.

The scale of the protests really shook Beijing. All the previous protest movements had lasted a few months, at most. This time, there was huge support, and it wasn’t dying down on its own.

From Beijing’s perspective, has the crackdown worked? And has it created any problems for the central government?

In many ways, it has absolutely worked. There are no more street protests. There’s extensive self-censorship. Virtually every prominent pro-democracy activist is in exile, in jail, awaiting trial or has disappeared from public life.

But there’s a lot of simmering anger among Hong Kongers, even if they don’t dare express it publicly anymore.

Do people within the movement see any reason for optimism?

Ever since the security law was enacted, the mood within the pro-democracy movement has been bleak. I expected at least some people to offer fiery defiance and remind people that there is still hope — if only just as a rallying cry, whether they believed it or not. But pretty consistently across people I talk to, the consensus is that there’s not much they can do to change the situation, at least for now.

That’s it for this briefing. As of Tuesday, this newsletter will have a new look. We hope you enjoy it. See you next time.

Thank you
Carole Landry helped write this briefing. Thank you to Melissa Clark for the recipe. You can reach the team at [email protected]

P.S.
• We’re listening to “The Daily.” Our latest episode features a police officer’s account of the Capitol riot.
• Here’s our Mini Crossword, and a clue: Pinocchio’s problem (five letters). You can find all our puzzles here.
• Our Brussels correspondent Matina Stevis-Gridneff joined BBC Outside Source to discuss the E.U. hunt for coronavirus vaccines.