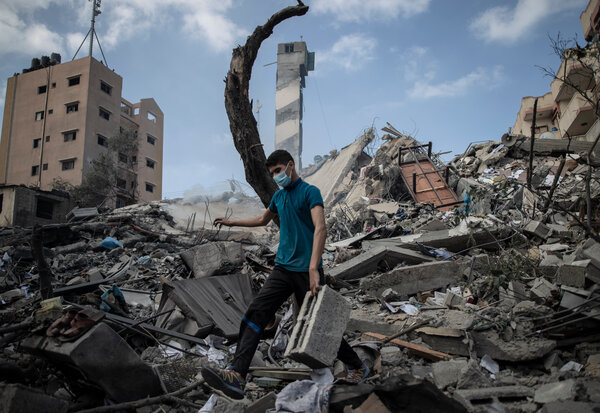 The U.S. president called Prime Minister Benjamin Netanyahu of Israel on Wednesday and told him he expected “a significant de-escalation today on the path to a cease-fire.” Netanyahu did not give any assurance during the call that this might happen, according to a senior administration official.

After visiting Israeli military headquarters, Netanyahu said he was “determined to continue this operation until its aim is met.”

An Israeli military spokesman said that the country had tried several times to kill the commander of Hamas’s military wing, Mohammed Deif, a longtime target who has spent decades underground while surviving eight attempts on his life.

Israel and Hamas have signaled a willingness to reach a cease-fire, diplomats involved in the discussions say. France is leading efforts to call for one at the U.N. Security Council, but it remains unclear when a resolution will be put to a vote.

Overnight Tuesday, an Israeli airstrike killed a Palestinian reporter, Yusef Abu Hussein, the first journalist to be killed in the conflict.

Online conflict: Israeli extremists have formed more than 100 new groups on WhatsApp, an encrypted messaging app owned by Facebook, in order to target attacks against Palestinians, including a mass street brawl in Bat Yam, a town on Israel’s coast. The episode was one of dozens across the country that the authorities have linked to a surge of extremist activity on the service.

Abroad: Rocks thrown at doors of a synagogue in Bonn, Germany. Israeli flags burned outside a synagogue in Münster. A convoy of cars in North London from which a man chanted slurs. Israeli-Palestinian strife is feeding a spate of anti-Semitic acts in Europe.

As the coronavirus spreads in India’s countryside, officials recorded 4,529 Covid-19 deaths on Tuesday, the highest known daily count in any country so far. Previously, the deadliest day recorded was in the U.S. in January, when 4,468 people died.

Infections seem to be slowing in some of India’s urban centers, which experts say is a reflection of the success of lockdowns, while the virus is still spreading elsewhere unchecked.

As the toll climbs, the story of twins who died one day apart — Joefred and Ralfred Gregory, handsome 24-year-old computer engineers in a satellite town of New Delhi — has spread fast and wide on social media, puncturing the numbing statistics.

The E.U. will reopen to vaccinated visitors and those from Covid-safe countries.

Australian officials say the country is unlikely to fully reopen its borders until 2022, a move critics fear will turn the country into a “hermit nation.”

New York City has reopened, while in France President Emmanuel Macron celebrated the partial lifting of the country’s lockdowns at a Paris cafe.

Indonesians sue their government over pollution

A rare citizen lawsuit seeks to force President Joko Widodo and other government officials to address the pervasive pollution in the Jakarta metropolitan area, a megacity of more than 29 million people with some of the worst air quality in the world.

A three-judge panel is expected to rule as early as this week whether Joko, three of his cabinet members, and three provincial governors have been negligent by failing to curb the city’s air pollution. The environmentalists who brought the suit want to push national and local governments to set stricter standards and enforce them.

The numbers: With nearly 11 million people, Jakarta is the largest of five cities that form a vast urban region with inadequate roadways and few green spaces. A study last week from a British consulting firm found that it was the city most at risk from environmental factors out of the 576 it analyzed.

Context: A month after the suit was filed, Joko proposed moving the capital to a new city to be built on the island of Borneo.

China released the first photos from its Mars landing.

Claims from a convicted organized crime boss about officials close to President Recep Tayyip Erdogan are rocking the Turkish government.

Of the 1,300 top-grossing films released from 2007 through 2019, just 44 featured an Asian or Pacific Islander character in a leading role — and one-third of the roles went to one actor, Dwayne Johnson.

In East Timor, communities are restoring traditional land management laws to protect the most biodiverse coral reef in the world, the BBC reports.

New York’s attorney general has joined a criminal inquiry into the Trump Organization being conducted by the Manhattan district attorney.

France’s wide-ranging new environmental bill is supposed to make the country a global champion in the fight against climate change, but critics dismiss it as greenwashing.

The murder of a Chinese-American teenager in Colorado in 2017 is now being investigated by the F.B.I. as a hate crime.

From the Met Gala to your lunchtime salad bowl, Naomi Osaka — the 23-year-old Haitian-Japanese tennis champion —  is suddenly ubiquitous. She made $37.4 million in endorsements and tournament prizes between May 2019 and May 2020, the most a female athlete has ever earned in a single year. “She ticks every box,” Cindy Gallop, a brand consultant, said.

Give the gift of time apart

Alone time is a precious commodity for couples and families who might not realize their irritability and stress may be tied to a lack of solitude. Allowing someone 24 hours of rest, or even just a few hours of undisturbed time with themselves, “can change the way they show up for others,” Nedra Tawwab, a therapist, told The Times.

A gift of free time can range from a night with friends to having your partner take the kids to the park on a Saturday afternoon so you can enjoy a deliciously empty house. Look for opportune windows to give alone time: If you’re taking the kids to visit your newly vaccinated parents for the weekend, does your partner really need to come along?

“A day of total freedom is both an opportunity to connect with your individual self, and helps foster feelings of empowerment, which is a powerful antidote to the helplessness that a lot of us have felt during the pandemic,” Jodie Eisner, a clinical psychologist, said. “It expands your recently narrowed comfort zone by reminding you that you’re capable and independent.”

This macaroni salad with lemon and herbs is bright, acidic and herbaceous.

The Japanese band Chai is a professional purveyor of whimsy.

Making a bird kite doubles as a meditative experience.

That’s it for today’s briefing. See you next time. — Whet

P.S. Join Andrew Ross Sorkin and industry experts on May 20 for the latest virtual event in our climate-change series Netting Zero by registering here.

The latest episode of “The Daily” is on life during the Israel-Gaza conflict.

You can reach Whet and the team at [email protected].