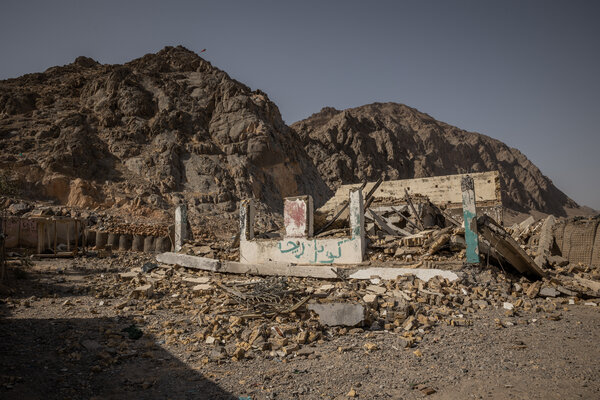 A Taliban takeover of Afghanistan?

Since international troops began withdrawing from Afghanistan in May, the Taliban have carried out a sweeping military campaign that has intensified over the past week. The Taliban have overrun nine provincial capitals across the country, most of them clustered in the north.

The victories have stoked fears that the Taliban could take the capital, Kabul. While the administration of President Ashraf Ghani has refused to acknowledge the falling capitals, the acting finance minister has fled the country.

The U.S. military has conducted airstrikes but mostly refrained from getting further involved, making clear that its 20-year involvement in the country was over. President Biden said on Tuesday that Afghan leaders have “got to fight for themselves, fight for their nation.”

Context: After the Taliban emerged in the 1990s, they faced fierce resistance from militia groups in the north known as the Northern Alliance. Even when Taliban fighters took Kabul in 1996, the alliance deprived them of a complete takeover. Now, experts say if the group takes the north, they could take the whole country.

Twin crises from poverty and Covid in Bangladesh

Bangladesh’s health care system is buckling under the third, deadliest wave of coronavirus infections. But the country lifted most lockdown measures on Wednesday to reopen the economy and allow people to go back to work.

Banks, shops and malls could reopen, and buses and trains were running. The garment industry was allowed to start up again two weeks ago, prompting thousands to travel back to the capital, Dhaka. Health experts fear that lifting restrictions will only worsen the outbreak.

No good choices: The pandemic has pushed some 24.5 million people into poverty, according to an April study. Government advisers said they had to lift restrictions. “It’s not possible for the government to keep the country locked down forever,” one official said.

Hospitals have been overrun, while only 4 percent of the population has been fully vaccinated. Officials are renting hotels and creating makeshift hospitals to treat patients.

Germany will stop offering free Covid tests to adults who choose not to be vaccinated.

A Sydney man who caused a weeklong lockdown in a coastal Australian town after traveling there while infected with the coronavirus is being charged with breaching public health orders.

The World Health Organization is testing three additional drugs as part of a global trial to find effective treatments for Covid-19.

The hidden toll of the U.S. heat wave

Hundreds of excess deaths were recorded in the U.S. Northwest during record heat waves this summer, a New York Times analysis found.

About 600 more people died in Oregon and Washington in June than would have been typical, a review of mortality data shows. In the Canadian province of British Columbia during the same period, 570 deaths have been deemed heat related, CBC reported. An analysis by climate researchers found that such an intense heat wave would have been virtually impossible without the influence of human-caused climate change.

This week in the U.S., nearly 200 million people are under a heat warning. The National Weather Service said that “sweltering temperatures span from sea to shining sea.”

Related: In Greece, the island of Evia has emerged as an epicenter for devastating wildfires that have destroyed pine forests and displaced hundreds of people. Wildfires in the forested mountains of northern Algeria have killed at least 65 people since Monday.

A Chinese court sentenced Michael Spavor, a Canadian, to 11 years in prison. The prosecution has been widely seen as political retaliation by China against Canada for the detention of a Chinese technology executive.

The Indonesian Army said it would stop subjecting female recruits to mandatory vaginal exams. The practice has been roundly condemned as a violation of human rights.

Russia brought a new charge against the opposition leader Aleksei Navalny, who now faces an additional three years in prison.

The U.S. Senate approved a $3.5 trillion budget blueprint despite unanimous Republican opposition. Some key Democrats voiced opposition to the price tag, setting up a battle over the final package.

Texas Republicans ordered the arrest of Democrats who missed voting sessions for a conservative bill that critics said would stifle voting rights.

Lionel Messi was greeted with cheers at his new soccer club, Paris St.-Germain.

An employee of the British Embassy in Germany has been detained on suspicion of handing over documents to Russian intelligence from the embassy.

Instagram is rolling out new features to make racist material harder to view.

Fourteen years ago, a mother organized a gender-nonconforming summer camp where children were free to express themselves. A photographer caught up with some of the kids a decade later as they entered adulthood. “At camp, it was just me being me,” one recalled.

The governor and #MeToo

Jodi Kantor, an investigative reporter for The Times, wrote about the resignation of New York Gov. Andrew Cuomo and the durability of the #MeToo movement. Here’s an excerpt.

Among the now-vast array of public #MeToo scandals, the political ones are often the most consequential, but also the most tortured, because they become so partisan, and often defy neat endings.

Justice Brett Kavanaugh’s confirmation hearings turned into war. Though a long line of women have accused Donald Trump of sexual misconduct, those claims seem unlikely to ever reach resolution.

Against that backdrop, the Cuomo story stands out because of the consensus among elected Democratic leaders that he could not remain in office.

In New York, what helped make the difference between one outcome and another was the attorney general’s investigation — the kind of painstaking examination that these situations require but almost never get.

“This is what we’ve been asking for,” Anita Hill said in an interview, speaking almost 30 years after she introduced the concept of sexual harassment to many Americans by testifying against Clarence Thomas during his Supreme Court confirmation hearings. “We should be looking at this as a model.”

This roasted broccoli is crisp and creamy. The charred florets have a lick of thick nutmeg-spiced sauce baked into every nook and cranny.

Anime fans have been waiting 25 years for Hideaki Anno’s “Evangelion: 3.0 + 1.0: Thrice Upon a Time,” which begins streaming this week.

High-intensity interval training — as little as four seconds a few times a day — has surprising benefits for fitness and physical power. But don’t stay seated the rest of the day.

Here’s today’s Mini Crossword, and a clue: Person you might get tongue-tied around (five letters).

That’s it for today’s briefing. See you next time. — Melina

P.S. A hidden haiku from a Times story about swimming with a manta ray in Hawaii: “I tried to race it / and lost, giddy and full of / awe at the sighting.”

The latest episode of “The Daily” is about the resignation of New York’s governor.

You can reach Melina and the team at [email protected].