We’re covering what a Biden presidency means for Europe, how leaders the world over failed their citizens and why thieves continue to favor one 17-century Dutch painting. 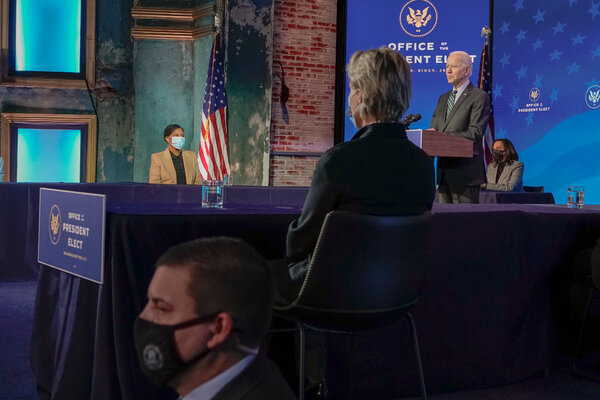 Europe welcomes Biden, but it won’t wait for him

After four years of a sometimes tumultuous trans-Atlantic relationship, the European Union is eager for “a political climate change” and cooperation under President-elect Joe Biden. But if, as European leaders suspect, the incoming president finds himself consumed with domestic problems, the continent won’t put its own agenda on hold.

Moreover, after four years of President Trump’s antagonism toward Europe, Europeans are more convinced than before that alliance cannot mean subordination to Washington and that it requires more European capacity to act alone.

Analysis: This European concern about a more inward-looking United States is legitimate, said Charles Kupchan of the Council on Foreign Relations. “You have in Biden someone who understands that the major national-security threat to the United States right now is us,” meaning Americans themselves, Mr. Kupchan said.

President Trump: The chaos that reached a fever pitch in the final weeks of Mr. Trump’s presidency will outlast his tenure as Washington braces for potential violence during inauguration week. It is unclear when Speaker Nancy Pelosi will formally send to the Senate the article of impeachment charging Mr. Trump with “incitement of insurrection.”

Mike Pompeo: As the secretary of state looks to his political future, his turbulent tenure is characterized by investigations into his leadership and ethics.

A global, yearlong cascade of failures

Governments and public health organizations around the world responded slowly and ineffectually to the coronavirus outbreak, according to an interim report by a World Health Organization panel scheduled for release today.

Faulty assumptions, ineffective planning and sluggish responses together helped fuel a pandemic that has killed more than two million people and infected more than 95 million. Time and again, the report concludes, those who were responsible for protecting and leading often did neither.

Investigators said they did not understand why the W.H.O. had waited until Jan. 30 to declare an international health emergency, nor why those clear warning signals were often ignored.

Quote: “We have failed in our collective capacity to come together in solidarity to create a protective web of human security,” the Independent Panel for Pandemic Preparedness and Response wrote.

Nearly one year after the virus was first detected in the U.S., the country is hurtling toward 400,000 total deaths.

Portugal’s hospitals are on the brink of becoming overwhelmed with coronavirus cases as infections continue to rise.

European leaders are set to debate a proposal this week for coronavirus “passports” that would let vaccinated people travel freely within the bloc.

India’s huge coronavirus vaccine rollout has been hobbled by technical glitches in a mobile phone application, leaving the country far short of its goals.

How an oxygen failure killed Covid-19 patients in Egypt

A video showing chaos in a Covid ward at a hospital in El Husseineya, Egypt, went viral on social media this month, drawing outrage across the country. The footage, filmed by Ahmed Nafei, a relative of one of the four patients who died in a single night, seemed to show that the hospital had run out of oxygen. The government rushed to deny the episode.

By talking to witnesses and analyzing the footage, our investigative reporters found that the oxygen shortage was the result of an avalanche of problems at the hospital. By the time patients were suffocating in the intensive care unit, a relief delivery of oxygen that had been ordered was already hours late and a backup oxygen system had failed.

Quote: “The whole world can admit there’s a problem, but not us,” one doctor at the hospital said.

If you have 7 minutes, this is worth it

A painting beloved by thieves

In August, “Two Laughing Boys With a Mug of Beer,” a 17th-century painting by Frans Hals, vanished for the third time since 1988. Conservatively valued at more than $10 million, the work is ordinarily housed at a tiny Dutch museum and has become a magnet for burglars.

Does its brushwork contain some clue to hidden treasure or a secret code? Could it be coveted by some cult that worships Hals, or perhaps beer? The answer, experts say, is probably more pedestrian: “They know they can get money out of it from somebody,” said the founder of Art Recovery International.

Aleksei Navalny: A judge ordered the Russian opposition leader to be jailed for 30 days pending a trial. Mr. Navalny was arrested late Sunday upon his arrival in Moscow from Germany, where he was recovering from a nerve-agent attack.

China: As most nations around the world struggle with new lockdowns and layoffs during the pandemic, China’s economy has bounced back after the country brought the coronavirus mostly under control.

New #MeToo: Hundreds of testimonies from people who say they were victims of incest have collected around the hashtag #Metooinceste on Twitter, after a scandal in which Olivier Duhamel, a prominent French intellectual, was accused of abusing his teenage stepson.

Brexit: Britain’s chemical industry, worth £33 billion (or about $45 billion) a year, faces rising costs from growing British regulatory burdens on chemicals, creating complications for companies that produce everything from marine paint to shampoo.

Snapshot: Above, the former champion rock climber Lai Chi-wai climbing a Hong Kong skyscraper on Saturday. Over the course of 10 hours, Mr. Lai climbed 800 feet up the glass facade of the 1,050-foot Nina Tower, raising $735,000 to fund research on a robotic exoskeleton for patients with spinal cord injuries.

NASCAR goes virtual: When the pandemic shut down motorsports, the industry turned to simulated racing. Ten months in, the gamble seems to be paying off.

Courthouse drama: Black artists and activists in Birmingham, England, say the city’s largest playhouse, the Birmingham Repertory Theater, has sold out by leasing its auditoriums to the criminal justice system.

What we’re reading: This long read from The Financial Times on how lockdown caused a creativity crisis. It’s a powerful reminder of the value of serendipity and spontaneity.

Cook: Loosely inspired by spanakopita, the classic Greek spinach and feta pie, this cozy baked pasta might be the tastiest way to eat your greens.

Listen: Take a spin down memory lane with the rapper MF Doom’s 1999 debut record, “Operation: Doomsday.” Our critic calls it “one of the most idiosyncratic hip-hop albums of the 1990s.”

Declutter: Embrace the instant, exhilarating relief of the Annoying Bag. Put in junk that’s getting on your nerves, then take it out to the trash.

Don’t lose heart. At Home has our full collection of ideas on what to read, cook, watch and do while staying safe at home.

How do you mark the most significant events when the news is already so relentlessly remarkable? At The New York Times, one way is to make the headlines very large.

A banner headline is typically one that stretches across a newspaper’s front page or website. It uses jumbo letters and bold type to convey the magnitude of a news item, pushing other articles out of its way.

There have been a lot of banner headlines on the front pages of The Times this winter — far more than usual, according to Tom Jolly, the newspaper’s print editor.

“It’s remarkable,” he said. “It’s definitely a reflection of our world, and all the major news events that have made 2020 so memorable — and are making 2021 memorable, too.”

An “event headline” is even bolder than a banner. The single word topping the print newspaper on Jan. 14 — “Impeached” — was discussed by several top Times editors in conversations that went late into the night, Tom said.

Though such headlines are typically reserved for presidential election results, this is an extraordinary time. Over the past three months, this ultra-dramatic layout has already been used three times. And counting.

Here are some of the big headlines:

When former Vice President Joe Biden took the lead in Pennsylvania, the fog of a too-close-to-call election began to lift.

After President Trump falsely claimed that widespread voter fraud had stolen victory from him, The Times called election officials in every state.

And two days after the siege by Mr. Trump’s supporters at the Capitol, Democrats laid the groundwork to impeach the president for the second time.

That’s it for today. See you tomorrow, with the latest from The Times.

Thank you
Theodore Kim and Jahaan Singh provided the break from the news. You can reach Natasha and the team at [email protected]

P.S.
• There’s no new episode of “The Daily” while we celebrate Martin Luther King’s birthday. Instead, we recommend The Sunday Read on how a group of climate activists decided to fight global warming by doing whatever it takes.
• Here’s our Mini Crossword, and a clue: “Later!” (five letters). You can find all our puzzles here.
• The word “legendness” — here referring to the figure skating champion Dick Button — appeared for the first time in The Times yesterday, as noted by the Twitter bot @NYT_first_said.