We’re covering resistance to Afghan refugees crossing into Turkey and a higher level of U.S. approval for Pfizer’s vaccine. 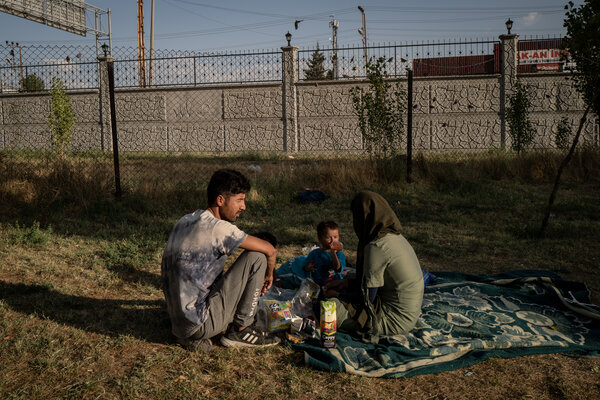 Weeks before Kabul fell to the Taliban, tens of thousands of Afghans were already fleeing their country each week. Many of them traveled 1,400 miles across Iran, hoping to make their way to Europe. But the migrants were met with sharp resistance at Turkey’s border, with thousands waiting in Iran’s border region.

In a single operation in July, more than 1,400 Afghans who had crossed into Turkey were rounded up and pushed back by Turkish police. Lawyers say the expulsions violate the international convention on refugees.

President Recep Tayyip Erdogan of Turkey warned Chancellor Angela Merkel of Germany by telephone on Sunday that his country “will not be able to shoulder the additional burden.” Turkey, he said to Merkel, “has already taken in five million refugees.” As in Europe, the public mood in Turkey has been at times hostile to immigrants and refugees, and hosting them has become a political issue as the Turkish economy has worsened.

Elsewhere, Australia started an advertising campaign to deter Afghan refugees from trying to reach the country by boat.

Evacuation progress: The U.S. military evacuated about 11,000 people from the Kabul airport in a 24-hour span, significantly speeding up the pace of U.S.-supported departures, which have totaled 37,000 since Aug. 14. But some Afghan interpreters and other U.S. allies are being turned away in order to give priority to Americans.

The U.S. Food and Drug Administration granted full approval to Pfizer-BioNTech’s Covid-19 vaccine for people ages 16 and older, making it the first shot to move beyond emergency-use status in the country.

The decision — which comes amid a major uptick in coronavirus cases, especially in the South — has already set off a series of vaccine requirements by institutions, and more are likely to join. Schools in New York and New Jersey, the Pentagon and companies including CVS and Chevron are requiring vaccines.

The Biden administration hopes the approval will motivate at least some of the 85 million unvaccinated Americans who are eligible for shots to get them.

A recent poll by the Kaiser Family Foundation found that three in every 10 unvaccinated people said that they would be more likely to get a Covid-19 vaccine if it was fully approved. But the pollsters and other experts warned that percentage could be exaggerated.

Shifting mind-sets: Vaccination rates have been rising in the U.S. in recent weeks, probably in part because of rising fears about the virus. President Biden said more people in Alabama, Arkansas, Louisiana and Mississippi — states that are being ravaged by the Delta variant — got their first shots in the past month than in the previous two months combined.

Australia, which is battling its worst coronavirus outbreak, should shift away from a strategy of lockdowns when its vaccination target is reached, the prime minister said.

The violent and deadly flooding in Germany and Belgium last month was an extremely rare event, scientists said on Monday, but one that was made more likely by climate change.

The scientists found that the kind of rare rainfall that led to the flooding, which killed more than 220 people, was 1.2 to nine times as likely now as it would have been more than a century ago. Since then, emissions of heat-trapping gases have warmed the world by more than one degree Celsius.

And if the world warms by two degrees Celsius, the probability of such an event would increase even more, becoming 1.2 to 1.4 times as likely as today.

The researchers also found that warming had increased the amount of precipitation of such a heavy rainfall by 3 percent to 19 percent.

After six years and $165 million in renovations, the newly opened modern art museum Neue Nationalgalerie in Berlin looks as it did in 1968. And that’s the point. Above, the exhibition “The Art of Society: 1900-1945.”

Poland and Lithuania plan to build fences along their borders with Belarus to halt a flow of migrants that the E.U. says is being driven by Minsk.

From Opinion: Svetlana Tikhanovskaya, a Belarusian opposition leader, writes that the fallout from President Aleksandr Lukashenko’s rule threatens all Europe: “All democratic nations have a stake in the future of the country.”

At least 21 people were killed in Tennessee and about 10 others remained missing yesterday after a catastrophic flash flood swept through a rural area of rivers, creeks and rolling woods, the authorities said.

A boat with dozens of migrants capsized off Libya, and at least 17 people were presumed dead, a U.N. official said yesterday, according to The Associated Press. About 80 Europe-bound migrants were presumed dead in two separate shipwrecks off Libya last month.

The International Monetary Fund distributed $650 billion yesterday to help poor countries pay down debt and withstand the costs of combating the coronavirus pandemic.

Lt. Gov. Kathy Hochul was sworn in as New York’s governor, becoming the first woman to hold the state’s highest office. Her predecessor, Andrew Cuomo, continued to deny the mounting sexual harassment charges against him.

The second accuser to testify against the disgraced R&B star R. Kelly said she was 17 when the singer pressured her for sex, as the second week of Kelly’s trial began. “I just wanted to sing,” she told jurors.

As the climate changes, the Dukha people — a small group of seminomadic reindeer herders in Mongolia — are being forced to make difficult decisions about their livelihood and their future. Our reporter recently spoke with them and photographed their journey to a new location.

Is OnlyFans ‘discarding’ its base?

Last week, OnlyFans, a platform where users can sell subscription access to their content, announced it would ban sexually explicit imagery starting in October.

The company handled more than $2 billion in sales last year, Bloomberg reported. Still, it has struggled to get funding from investors, who are hesitant to associate with the company’s sexually explicit material, as Axios reported. In a statement, OnlyFans said it was blocking explicit content at the request of its “banking partners and payout providers.”

“Someone said it’s like Burger King saying they’re not selling burgers anymore,” Kenneth Pabon, a 22-year-old OnlyFans creator, told The Times. “This is what OnlyFans is known for.”

The key to this quick, fragrant chicken biriyani with saffron cream is a rice cooker.

Here are five steps to take to ward off heartburn.

Two new books explore the wonders that live at the bottom of the sea.

That’s it for today’s briefing. Thanks for joining me. — Melina

P.S. Matej Leskovsek is joining our team of International photo editors and will be based in Seoul.

The latest episode of “The Daily” is about Covid-19 in children.

Matthew Cullen contributed writing. Sanam Yar wrote the Arts and Ideas. You can reach the team at [email protected].