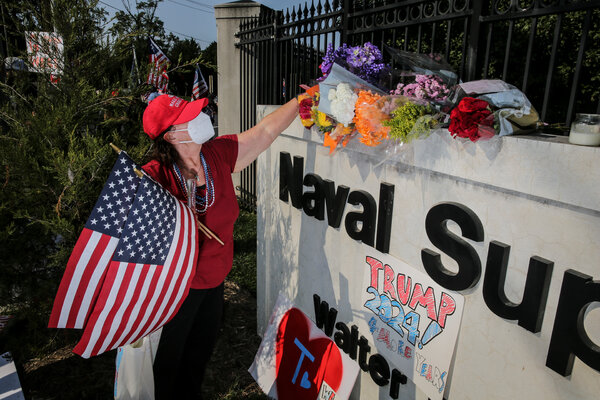 Trump says he will leave hospital

Despite lingering questions about his condition, President Trump said that he intended to leave Walter Reed medical center on Monday. He has been hospitalized for a coronavirus infection since Friday.

Mr. Trump tweeted: “Feeling really good! Don’t be afraid of Covid. Don’t let it dominate your life.” His physician, Dr. Sean Conley, later said that the president’s health had improved and that he would return to the White House.

The president has been eager to leave the hospital and show the country that he has not been sidelined by the virus. His medical team has presented mixed messages, saying that he was feeling well but also that his blood oxygen levels had dropped at least twice and that he had been prescribed a drug normally reserved for patients with severe cases of Covid-19.

White House outbreak: On Monday, the press secretary, Kayleigh McEnany, became the latest person in the president’s inner circle to announce that she had tested positive for the virus. Ms. McEnany said she would be quarantining. Two other press team members tested positive.

Indonesia’s Parliament gave final approval Monday to a jobs-creation and stimulus bill that would loosen labor and environmental regulations, moves that critics say would harm workers and permit widespread deforestation.

The European Commission said Monday that 179 of its staff members had tested positive for Covid-19 since the start of the pandemic, with its leader continuing to isolate after being exposed last week.

The British company Cineworld, which owns Regal Cinemas, said it would temporarily close all 663 of its movie theaters in the United States and Britain. There are 45,000 jobs at stake, and it was another blow to the struggling entertainment industry.

Chinese propaganda is rarely subtle, but the torrent of bombast online and in state media in recent weeks is potentially ominous.

New videos target the U.S. and Taiwan, which are getting closer, and have surfaced at the same time as a series of military drills. Together, they intend to signal that China would not shrink from a military clash.

The prospect of war remains remote, but the risk is that the propaganda could translate into more provocative actions. Recent military moves in the South China Sea and the Taiwan Strait raise the possibility of actual clashes, intended or not.

Beijing seems particularly alarmed by debate in Washington about whether the U.S. should explicitly state its willingness to defend Taiwan from a military attack.

Details: One of the videos features the chorus “if war breaks out, this is my answer” and shows soldiers running through a forest as bombs explode. Another video featured a simulated airstrike on Guam, the American territory in the Pacific.

A suicide crisis in Japan

From the outside, Yuko Takeuchi seemed to have a golden life. She had won Japan’s top acting award three times, had recently given birth to her second child and appeared in a box-office favorite last year.

Ms. Takeuchi, 40, died late last month, apparently in a suicide. A succession of suicides of Japanese film and television stars has shown the burdens of a society where many feel that they must conceal their personal struggles.

The authorities are reporting an alarming rise in suicides within Japan’s general public during the coronavirus pandemic, after a decade of hard-won decline from some of the highest rates in the world.

Details: In August, there was a nearly 16 percent increase in suicides compared with a year earlier, with the number spiking by 74 percent among teenage girls and women in their 20s and 30s.

Quotable: “As a society, we feel like we cannot show our weaknesses, that we must hold all of it in,” said Yasuyuki Shimizu, director of the Japan Suicide Countermeasures Promotion Center.

If you have 6 minutes, this is worth it

At the age of 12, the future U.S. vice-presidential nominee moved to Montreal from California and spent her formative years in a multicultural environment typical of many Canadian public schools. She was an extroverted American, who dreamed of becoming a lawyer and liked dancing to Diana Ross and Michael Jackson.

Our Canada correspondent looked at how the Montreal high school years shaped Kamala Harris, whose father is from Jamaica and mother is from India. She “melted with everyone,” said one of her former schoolmates.

WeChat: The messaging app, with its billion users worldwide, has created a sense of community and belonging for immigrants. But it has also exposed them to a cascade of disinformation and Chinese government propaganda, our reporting found.

Red Bull heir in Thailand: Interpol has issued a “red notice” for the fugitive grandson of the energy drink company’s founder. He fled Thailand after he struck and killed a police officer in his Ferrari in 2012. The authorities were criticized for dropping charges against him in July.

Nobel Prize: This year’s prize in Physiology or Medicine was given to three scientists — two Americans and a Briton — for discovering the hepatitis C virus. Read more about the winners, Harvey Alter, Michael Houghton and Charles Rice.

Snapshot: Above, police arresting a woman at a protest in Tel Aviv over the weekend. As the number of coronavirus cases surged and a second lockdown was imposed, many residents lashed out at the government and took to the streets, building on a movement calling for Prime Minister Benjamin Netanyahu’s resignation.

What we’re reading: This Los Angeles Times profile of the singer Stevie Nicks. Dan Saltzstein, deputy editor for Special Sections, writes: “Who doesn’t love Stevie Nicks? Take her attitude about the pandemic. It’s, as the kids say, a mood.”

Cook: This pan-fried eggplant with chile, honey and ricotta can be served as a first course, a substantial side dish or a light main course with a green salad on the side.

Watch: “David Attenborough: A Life on Our Planet” traces the naturalist’s decades-long career, mapping how steeply the planet’s biodiversity has degenerated before him. Our critic calls it a “majestic documentary.”

Do: Whether you want to relax, entertain or get some work done, a footstool is one piece of furniture you should add to your living room. Here are some tips to help you choose the perfect one.

The virus is still lurking and we are still safest inside. At Home has ideas on what to read, cook, watch, and do while staying safe at home.

The places you love

52 Places to Go, a special feature from The Times’s Travel section, traditionally draws on editors, reporters and contributors for recommendations on the most timely sights and delights on offer in the upcoming year. It’s our annual guide to the world’s most awe-inspiring destinations.

During the pandemic, travel, as we knew it, has changed.

In that vein, our 52 Places list will be different in 2021. While we can’t know what lies ahead, we can still share the places we’ve loved, and continue to inspire curiosity, open-mindedness and awe for the wider world.

That’s why we’re turning to you for next year’s list, which we are calling 52 Places We Love. We want 52 love letters to travel, all penned and photographed by you, our readers around the world, each about one place in the world that is special to you. It can be a popular tourist destination, or a place that’s largely overlooked. You might inspire someone else to go there one day, or to reconsider their assumptions, or to spark their inquisitiveness about a new piece of the world — all the empowering things that travel brings to our lives.

You can submit your recommendation here.

Thank you
To Melissa Clark for the recipe, and to Theodore Kim and Jahaan Singh for the rest of the break from the news. You can reach the team at [email protected]

P.S.
• We’re listening to “The Daily.” Our latest episode is about the latest on President Trump’s health.
• Here’s our Mini Crossword, and a clue: It separates white light into a rainbow (five letters). You can find all our puzzles here.
• The New York Times won a Gold Effie award in the Media & Entertainment Companies category for its “The Truth is Worth It” brand campaign.