A closed-door trial for Myanmar’s leader.

By Melina Delkic and Amelia Nierenberg 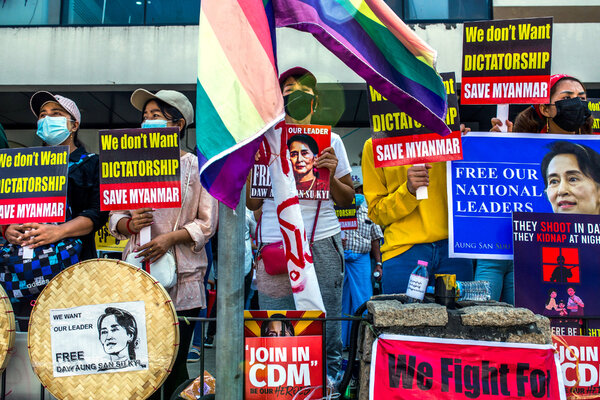 A secret trial in Myanmar

The closed-door trial of Daw Aung San Suu Kyi, Myanmar’s civilian leader who was ousted in a military coup two weeks ago, began in secret Tuesday. The defense lawyer was notified at the last minute about the court hearing. By the time he rushed to the court, it had ended.

Ms. Aung San Suu Kyi faces obscure charges that could land her in prison for six years: violating import restrictions after walkie-talkies and other foreign equipment were found in her villa compound along with a previously undisclosed charge of interacting with a crowd during the pandemic.

U Win Myint, the deposed president who also went on trial over charges of interacting with a crowd on Tuesday, could spend three years in prison if convicted.

Context: The first day of the trial followed two dizzying weeks during which the military stripped away civil liberties for the entire population, imprisoned hundreds, and ignored the millions protesting their seizure of power. “This is a fight for our future, the future of our country,” one youth activist told the South China Morning Post. “We want to establish a real federal union where all citizens, all ethnicities are treated equally.”

From Opinion: Democracy advocates “must use the current protests as leverage to obtain, via international negotiators, that the Tatmadaw won’t disband or otherwise sideline the N.L.D.,” Ms. Aung San Suu Kyi’s party, writes Min Zin, a political scientist in Yangon who was part of a 1988 democracy uprising.

In the U.S., Fox News is staggering out of the Trump era. But in Britain, Rupert Murdoch and a group of investors are seizing the moment to create two upstart news services that will challenge the BBC.

The right-wing outlets will borrow heavily from the U.S. Fox strategy, and Mr. Murdoch’s venture, News UK TV, hopes to fill what he sees as a gap in the British market for edgy commentary and big personalities. The rollout begins in April.

Executives said News UK TV would stay within regulatory “guardrails.” But critics say Mr. Murdoch entered other markets, including Australia, with similar reassurances, only to make the channels more politically extreme over time.

A second, rival venture, GB News, has different backers but is stocked with veterans of the Murdoch empire. GB News is calculating that there is an audience for a channel that rejects what it views as the left-leaning politics of the BBC.

North Korea tried to hack into the computer systems of international pharmaceutical companies, including Pfizer, to steal information on the Covid-19 vaccine, a South Korean lawmaker said on Tuesday.

North Korea, which has a decrepit public health system, claims officially to be free of Covid-19. It sealed its borders early last year. The lawmaker, Ha Tae-keung, who is affiliated with a South Korean opposition party, spoke to reporters after a closed-door briefing by intelligence officials.

Context: ​Western officials have ​long accused North Korea ​of stealing​ technology and cash from the outside world​ through hacking​.

A lab in Cambodia is on the lookout for the next pandemic. It could bring the country to the heart of a global effort to watch for new diseases.

South Africa will distribute unused doses of the AstraZeneca-Oxford vaccine to other African nations after a small trial failed to show the vaccine could prevent mild or moderate cases caused by the local variant.

Who knows how to take deep breaths? Opera singers. The English National Opera is helping patients recover from Covid-19 with singing lessons and breathing exercises.

The House of Soviets, an office building in Kaliningrad designed as a symbol of Soviet control over land captured during World War II, has instead become emblematic of the flaws of the Soviet system. Because of shoddy construction and structural defects, it has never been occupied.

But its ugliness made it strangely beloved by young people as an emblem of a Soviet Union they never knew. Now, 42 years later, as the regional government plans to demolish it, some want to keep it. “People like things with defects,” one resident said. “It’s ugly, but it’s ours.”

Bangladesh journalist killing: A court sentenced five members of an Islamist militant group to death on Tuesday for killing an American blogger critical of religious extremism. The blogger, Avijit Roy, a U.S. citizen of Bangladeshi origin, was killed in 2015.

Australian Open: Serena Williams beat Simona Halep, setting up a showdown with Naomi Osaka. Aslan Karatsev of Russia, an unknown player, became one of the few players to make the semifinal of a Grand Slam. Here’s what else to watch.

China’s box office: Hundreds of millions of people around China who would normally be celebrating the Lunar New Year holiday are instead going to the movies — powering a resurgence at the box office. “Detective Chinatown 3” raked in an estimated $397 million over three days — a world record for the largest opening weekend in a single market.

U.S. winter storm chaos: Millions of people are without electricity and at least 20 people have died after a sprawling storm dumped snow across much of the U.S. The outages highlighted a deeper warning over risks from extreme weather events, brought on by climate change.

Snapshot: Above, refugees in a tented city in Afrin, Syria. Our journalist visited Turkey’s safe zone in northern Syria, where President Recep Tayyip Erdogan sent troops across the border three years ago. Kurdish families fled the invasion but the Syrians who moved there say they are grateful for the Turkish presence, despite their hardship.

What we’re watching: This 11-hour underwater footage of sea life on YouTube. It’s the perfect soothing background to help you focus.

Cook: This rich, creamy chocolate pudding is a comforting dessert for two that comes together in no time at all.

Read: In Cherie Jones’s debut novel, “How the One-Armed Sister Sweeps Her House,” the lives of tourists and locals intersect in the Caribbean in 1984.

We can help you stay engaged and active with our At Home collection of ideas on what to read, cook, watch and do while staying safe at home.

Sheila Mulrooney Eldred, a health journalist, is getting a front-row seat to one of the most-anticipated pediatric trials in history, as her two teenagers participate in the Moderna Covid vaccine trial. She wrote about what it’s been like.

For Wes and Zoe, the shot itself was anticlimactic; even needle-averse Wes said it hardly hurt. Still, since most allergic reactions can occur within 30 minutes of a shot, we had to wait around for an hour afterward.

Like all kids in the current trial, Wes and Zoe got the same dose as adults, which is typical for Phase 3 clinical trials, said Dr. Jill Weatherhead, an assistant professor of infectious disease at Baylor College of Medicine in Houston.

For the next seven days, Wes and Zoe answered questions in their online diaries about any pain, achiness, swelling, fevers or fatigue they experienced. Unlike most adult Covid vaccine trials, which favor participants who regularly come into contact with people outside their households, Moderna had no instructions for us on changing our lifestyle. So life returned to distance learning and socially-distant ski practice.

Then, on Day 7, my phone buzzed with a text from a friend whose son had participated in the trial the same day we had: “So, Zach has a rash around his injection site.”

I pushed aside my instinctive jealousy (we had promised to remain friends even if one of our families got stuck with the placebo). The next evening, I heard some excitement upstairs that made me set aside my book: Wes had discovered a similar red splotch on his arm. We measured the rash to report to our coordinator.

Even if it turns out that one or both of my kids got the saltwater placebo, which is given to one third of the participants in the teen trial, none of us will regret signing up.

Thank you
Carole Landry helped write this briefing. Theodore Kim and Jahaan Singh provided the break from the news. You can reach the team at [email protected]

P.S.
• We’re listening to “The Daily.” Our latest episode features an interview with a House impeachment manager.
• Here’s our Mini Crossword, and a clue: Playing the music at a wedding reception, say (five letters). You can find all our puzzles here.
• In his annual “State of The Times” address, The Times’s publisher and chairman, A.G. Sulzberger, provided employees with a look back on their work in 2020.