Good morning. We’re covering fears of a humanitarian disaster in Gaza and the trauma for doctors battling the Covid-19 crisis in India. 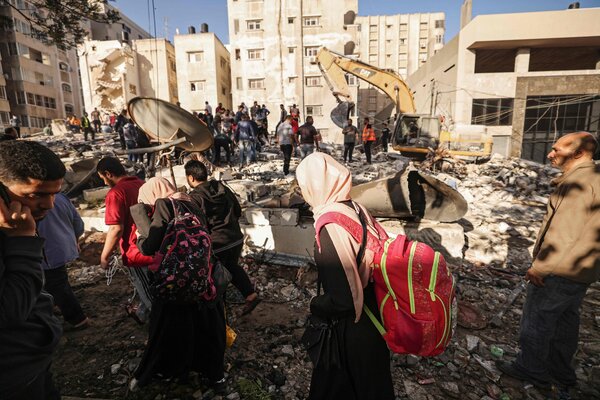 A growing humanitarian crisis in Gaza

During the second week of fighting between Israel and Hamas militants, Gaza is facing a dire humanitarian catastrophe that is touching nearly every one of its two million residents. There is a shortage of clean water, and fetid wastewater from destroyed sewage systems is coursing through the streets.

In one of the most striking examples of the devastation, an Israeli airstrike damaged the only laboratory in Gaza that processes coronavirus tests. Here are the latest updates.

Palestinians in Israel, the occupied West Bank and Gaza went on strike on Tuesday in a rare moment of unity to protest their shared treatment by Israel. And Arabs across the world are using social media to speak out against Israel’s actions.

Diplomacy at work: There are some signs that Israel and Hamas may be edging toward a cease-fire, with Egypt and the United Nations working to “restore calm,” according to a person involved in the talks. E.U. foreign ministers have called for an immediate cease-fire.

The U.S. stance: During a phone call with Prime Minister Benjamin Netanyahu of Israel, President Biden delivered a firmer message than he has done in public, according to people familiar with the call. Biden warned that he could put off pressure from the international community and from Congress only for so long. He has voiced support for a cease-fire.

A look back: The Times created a day-by-day reconstruction of the violence with maps, death tolls and satellite images.

More than 1,000 doctors in India, and an untold number of medical personnel, have died after being infected with the coronavirus. Many more suffer an emotional toll from the pandemic, as they have to parcel out limited treatment.

“All your life you prepare yourself to exhaust every option to save a patient, but imagine when you have to prioritize?” said Dr. Mradul Kumar Daga. “Those are the most heartbreaking decisions as a doctor you have to make.”

Japan’s economy shrank in the first three months of 2021, the latest downswing in a pandemic yo-yo as the virus continues to spread and vaccinations lag there.

Domestic workers in Hong Kong face discrimination after the government said they were at “high risk” for infection and accused them of violating social-distancing rules.

Capri, a pricey vacation spot, got first dibs on vaccines in Italy in an effort to compete against Greece and Spain for tourists.

A test of state bailouts in China

Huarong, the sprawling Chinese financial conglomerate, owes more than $40 billion in debt to foreign and domestic investors, and may have further to fall.

Now, although Beijing has spent decades bailing out Chinese companies, the government is quietly planning a reorganization that will force foreign and Chinese bondholders alike to accept significant losses.

Analysts say Huarong’s future may be the strongest indication of China’s commitment to financial reform. Unlike the handful of small banks and state-owned companies that have been allowed to fall apart, Huarong is a central part of China’s financial system and, some say, “too big to fail.”

Spain sent troops into its North African enclave of Ceuta after over 6,000 people crossed the border from Morocco. It was one of the area’s largest reported movements of migrants in recent years.

Developers are building on Australia’s coasts, as locals and international visitors seek out water views after a pandemic year and a respite from a rapid population growth.

The death of a migrant from Sri Lanka in a Japanese detention center has spurred a reckoning in a country with a history of hostility toward immigration.

News from the U.S.

A state prosecutor said that the fatal shooting of a Black man in North Carolina by local sheriff’s deputies was justified.

The Biden administration will release three detainees at Guantánamo Bay to countries that agree to impose security conditions on them.

In 1992, Sinead O’Connor ripped up a photo of the pope and derailed her career. But that moment, the former pop star writes in a new memoir, might have actually put her right back on track.

Curtains up on London’s West End

After fits and starts through the coronavirus, London’s famed West End theater district reopened on Monday, perhaps for good. Over 55 percent of the British population has received at least one dose of the vaccine, and many feel like they are on the other side.

The shows are not yet open at full-capacity, and audience members must wear face masks throughout performances. But producers say they will do whatever they can to keep shows open, both for actors and crew, and for fans like Katie Connor.

“I’m just so happy to be back,” said Connor, 40, standing outside the Royal Opera House, which reopened with Mozart’s “La Clemenza di Tito.” “I’m pretty sure I’m going to ugly-cry for the whole two hours and 25 minutes of the show.”

Nearby, Agatha Christie’s long-running murder mystery, “The Mousetrap,” ran for its 28,200th performance. The show has changed little since its 1952 debut, and there was little rewriting to less coronavirus risks. (They only removed one kiss, which the producer noted was consistent with pre-World War II attitudes anyway.) And, at intermission, as at intermissions for almost 70 years, no one yet knew whodunit.

Any type of dried noodles can work in this recipe for yo po mian, a staple from China’s central northwest.

Our inconsistencies in judgment are “Noise,” according to a new book about fairness and decision making.

“Shrek” which came out 20 years ago, started as a chaotic project before it became a surprise box-office hit.

You can find all of our puzzles here.

That’s it for today’s briefing. See you next time. — Amelia

P.S. Motoko Rich, our Tokyo bureau chief, joined NPR and the BBC to discuss the upcoming Tokyo Olympics and the growing sentiment among Japanese people who say they want the event canceled.

The latest episode of “The Daily” is about the U.S. economy.

You can reach Amelia and the team at [email protected].