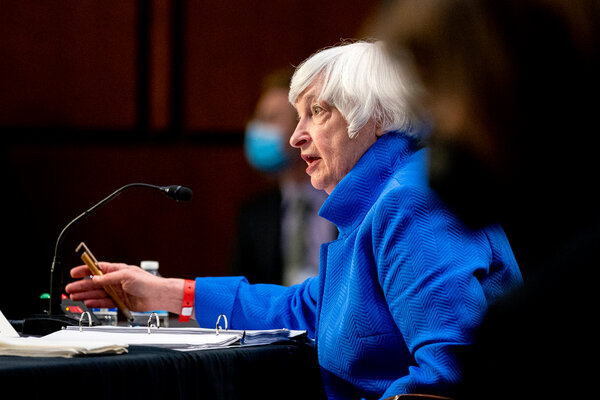 Janet Yellen, the U.S. treasury secretary, warned U.S. lawmakers of “catastrophic” consequences if Congress failed to raise or suspend the statutory debt limit before Oct. 18, saying inaction could lead to a self-inflicted economic recession and a financial crisis.

Her warnings came as the stock market had its worst day since May. The S&P 500 fell 2 percent, and yields on government bonds jumped to their highest level since June, reflecting expectations that the Fed will begin to slow its bond purchases as prices rise and the economy heals.

Senate Republicans on Monday blocked an emergency spending bill that would have funded the government through early December and lifted the debt limit. Democrats could unilaterally raise the debt ceiling by using a fast-track process known as reconciliation that shields fiscal legislation from a filibuster, but they have so far resisted that option as complex and time-consuming.

Effects: “It would be disastrous for the American economy, for global financial markets, and for millions of families and workers whose financial security would be jeopardized by delayed payments,” Yellen said. A default could also jeopardize the dollar’s status as the international reserve currency, she suggested.

Analysis: The current fight over raising the debt limit is proving to be another lesson in American political dysfunction, writes Clay Risen in our On Politics newsletter.

A crisis with Brexit overtones

For months, pandemic-induced economic shutdowns in Britain helped mask the ways that Brexit had disrupted commerce. That disguise fell away last weekend when gas stations across the country began to run out of gasoline, producing a panic and long lines of motorists awaiting a pump.

A dearth of truck drivers exacerbated by Brexit has contributed to the shortages. Of the estimated shortfall of 100,000 truckers, about 20,000 are non-British drivers who left Britain during the pandemic and now face more stringent, post-Brexit visa requirements. The government hopes to address that shortfall with 5,000 three-month visas for foreign drivers.

Yet Brexit has scarcely featured in the public discussion — in part a reflection of the calcified nature of the debate over Britain’s departure from the E.U. After years of feuding, even Brexit’s most ardent opponents show little appetite to relitigate the 2016 referendum, while Brexiteers invariably find other culprits for bad news, including the pandemic.

Across the Channel: “We worked very hard to convince the British not to leave the union,” Olaf Scholz, leader of Germany’s Social Democratic Party, said on Monday, when asked about the crisis. “Now they decided different, and I hope they will manage the problems coming from that.”

Analysis: “You have business models based on your ability to hire workers from other countries,” said David Henig, an expert on trade policy. “You’ve suddenly reduced your labor market down to an eighth of the size it previously was. There’s a Brexit effect on business models that simply haven’t had time to adjust.”

Explainer: Here’s what you need to know about Britain’s gas shortage.

Germany’s conservative party at odds with itself

The defeat of the Christian Democratic Union in Germany has left the party in disarray and raised worries about the conservative movement’s long-term survival. Nearly two million voters shifted their support away from the party to the Social Democrats on Sunday, a departure coinciding with the end of Angela Merkel’s tenure as chancellor.

“It has raised a question about our very identity,” Norbert Röttgen, a senior member of the Christian Democratic Union, said. “The last, the only big people’s party in Germany. And if this continues, then we will no longer be that.”

The election’s splintered result is hard to interpret, particularly as the last government included traditional parties on the center-right and the center-left. But it seems to reveal a more fragmented society that increasingly defies traditional political labeling, as well as a definitive end to the long era of Germany’s traditional “Volks”-parties, catchall “people’s” parties.

Merkel: Many of the party’s creeping troubles were disguised by Merkel’s own popularity and appeal, which reached beyond a traditional conservative electorate and allowed members of her party to avoid addressing the shifts in how German voters identify.

Coalition talks: While Armin Laschet, the conservative candidate, is still insisting that he will hold talks with the Greens and the Free Democrats to form a majority coalition, many in his own camp have conceded defeat. One of his main internal rivals has already congratulated Olaf Scholz, of the Social Democrats, on the election result.

Pfizer and BioNTech said they had submitted data to U.S. regulators that showed that their coronavirus vaccine is safe and effective in children ages 5 to 11.

Fear of the Delta variant, more than rewards or mandates, is motivating Americans to get vaccinated, a survey has found.

People in the U.S. who received a third dose of a vaccine reported side effects at roughly the same rates as they had after their second shots.

LeBron James, the basketball star, said he had gotten vaccinated despite initially feeling skeptical. Several other N.B.A. players have resisted the vaccines.

During a heated Senate hearing, Gen. Mark Milley, the chairman of the Joint Chiefs of Staff, defended his actions in the final months of the Trump administration and warned that Al Qaeda and ISIS could rebuild in Afghanistan.

Polls show that the Japanese public favors Taro Kono, the cabinet minister who is overseeing Japan’s coronavirus vaccine rollout, to be the next prime minister. But party elders think less highly of him.

North Korea fired a short-range missile, the South Korean military said, just as the North’s envoy to the U.N. called on the U.S. to end its “hostile” policy toward his country.

Canada doubled the number of Afghan refugees it plans to take in to 40,000, the Canadian foreign minister said on Tuesday.

Many from Iran’s younger generation are postponing weddings and searching for ways to leave the country in the face of economic and political stagnation.

Researchers found that one tiny Arctic village’s unfiltered sewage produces as much microplastic as the treated waste of more than a million people.

When Dasani Coates won a place at a rural boarding school established to “educate children in need,” she dreamed of a life beyond the shelters she had grown up in. Each day, she would stare at the Empire State Building in the glint of early morning. “It makes me feel like there’s something going on out there,” she said.

But what happens when trying to escape poverty means separating from your family at 13?

The resurrection of a deathly Michelangelo sculpture

Michelangelo was in his 70s when he began working on the sculpture he envisioned appearing on his own tomb: a marble Pietà, depicting Jesus supported by the Virgin Mary, St. Mary Magdalene and the pharisee Nicodemus, whose face is a barely etched self-portrait of the aging artist.

The project was difficult. The marble block was flawed, and Michelangelo eventually grew frustrated and abandoned the work. Despite his desire to destroy it, the sculpture survived, going from owner to owner over a period of almost 470 years.

The decision to make a plaster cast of the statue in 1882 left the already unfinished work in disrepair, covered in a layer of blotchy amber-colored wax that invited comparisons with a Dalmatian. Since 2019, the statue has been under restoration for the first time, as a team painstakingly removes the layers of wax and grime.

“The first time I put my hands on Michelangelo, I was 40; now I am 62,” said Paola Rosa, the project’s chief restorer. “It’s so moving, so particular, and I still don’t feel as though I know him. With just a few blows with his scalpel, he’s able to do amazing things.”

The work is now on display at the Opera del Duomo Museum in Florence, Italy.

Read more about the restoration.

World Through a Lens

In southern Mexico, the Zapotec people have long accepted — and celebrated — gender nonconformity. Our travel section has these portraits of the community.

Here’s today’s Mini Crossword, and a clue: Bend out of shape, as wood (four letters).

That’s it for today’s briefing. See you tomorrow. — Natasha

P.S. The Times introduced the Headway team, which will investigate significant national and international challenges through the lens of progress.

The latest episode of “The Daily” includes a conversation with an Afghan general.

You can reach Natasha and the team at [email protected].