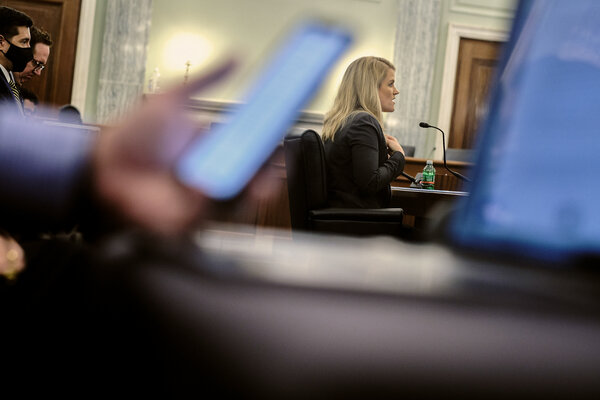 Frances Haugen, a former Facebook product manager turned whistle-blower, yesterday told a Senate subcommittee how the company deliberately kept people — including children — hooked on its services. She had previously leaked thousands of pages of internal documents to The Wall Street Journal.

Facebook had purposely hidden disturbing research about how teenagers felt worse about themselves after using its products and how it was willing to use hateful content to retain users, she said during her testimony. “The company’s leadership knows how to make Facebook and Instagram safer but won’t make the necessary changes,” she added.

Response: After years of congressional hearings on Facebook and other large tech companies, Haugen’s appearance stood out in part for the way she united lawmakers around tackling the issue of the platform’s harm to teenagers. Some senators called her testimony a “Big Tobacco” moment for the technology industry.

Next steps: Though Haugen had presented clear evidence of Facebook’s harms, “it’s up to lawmakers to turn that evidence into regulations that address the specific issues she raised,” said our tech columnist Kevin Roose, writing in our live blog. “It’s hard to be optimistic on that front, given Congress’s record on tech regulation,” he wrote.

England’s choice to send students back to school with neither Covid-19 vaccines nor mask requirements has resulted in 186,000 students being absent from school on Sept. 30 with confirmed or suspected cases of the virus, 78 percent more than two weeks earlier, and the highest number since the pandemic began.

Yet the policy is popular among many who believe forcing children to wear masks — or stay home — would have involved a bigger risk. For more skeptical parents, the abandonment of such measures has been disquieting, even if few schools have been hit with major outbreaks. Cases in England are rising fastest among those aged 10 to 19.

Most adults in Britain have received two doses of a vaccine, while staff and students have ready, free access to rapid antigen tests, which they are encouraged to take twice a week. Schools are not required to inform the families of classmates if a student tests positive. England’s discarding of masks in schools puts it at odds with Italy, Spain and France.

Quotable: “It’s pretty fraught because teachers and school leaders are juggling so many problems,” said Geoff Barton, the general secretary of a group that represents school administrators. “If you unleash millions of kids to go back to school,” he said, “you will see a rise in cases.”

By the numbers: Even with the large number of Covid-related absences, 90 percent of the 8.4 million students in state-supported schools are in class. The majority of absences are because of reasons other than Covid.

Australia and New Zealand inched closer to reopening their economies by announcing steps to allow vaccinated people to move more freely. Australia said foreign visitors would not be able to visit until 2022 at the earliest.

India’s Supreme Court ordered the government to pay 50,000 rupees, or about $671, to families of people who have died from Covid.

History of abuse in the French Catholic Church

Clergy members in the Roman Catholic Church in France sexually have abused about 216,000 minors, mostly boys ages 10 to 13, since 1950, according to an estimate by an independent commission set up at the request of the church. The commission concluded that the problem was far more pervasive than previously known.

“The church failed to see or hear, failed to pick up on the weak signals, failed to take the rigorous measures that were necessary,” said Jean-Marc Sauvé, the president of the Independent Commission on Sexual Abuse in the Church, at a news conference in Paris yesterday.

For years, the church showed a “deep, total and even cruel indifference toward victims,” he added. The report laid out in detail how the church hierarchy had repeatedly silenced the victims and failed to report or discipline the clergy members involved.

Estimates: The figure of those abused reached 330,000 after including perpetrators who were laypeople and worked for the church or were affiliated with it, such as Boy Scout organizers or Catholic school staff.

Context: The report followed efforts in recent years to disclose or document similar allegations against Catholic clergy members in Australia, Germany, Ireland, Poland, the U.S. and other countries.

News From the U.S.

President Biden and Democratic leaders slashed their ambitions for an expansion of America’s social safety net from $3.5 trillion over 10 years to $2 trillion or less.

The C.I.A. has admitted to losing dozens of informants who have been hunted down by Russia, China, Iran and Pakistan. In some cases, the informants have been turned into double agents.

The Texas state parole board has recommended a posthumous pardon for potentially fraudulent drugs charges for George Floyd, whose killing in 2020 touched off a national debate over race and policing.

The world lost about 14 percent of its coral reefs in the decade after 2009, mainly because of climate change, according to a sweeping international report.

Supply chain disruptions continue to plague Europe. Economists have begun to predict a “bottleneck recession” in Germany, while Boris Johnson, the British prime minister, said that businesses needed to do more to end the shortages that have afflicted the country.

Antony Blinken, the U.S. secretary of state, held meetings in Paris to rebuild trust between the U.S. and France following a secretive submarine deal.

A contemporary-art approach to a Holocaust commemoration in Ukraine has irked traditionalists — and attracted visitors.

A Russian film crew boarded the International Space Station to shoot scenes for the first feature-length film in space.

Three scientists won the Nobel Prize in Physics for their work on how human behavior is influencing climate change.

What right do you have not to be represented in someone else’s fiction without consent? And what right do writers have to be inspired by whomever or whatever they choose?

These questions — along with other thorny quandaries about what does and does not constitute plagiarism — sit at the heart of a legal dispute between two writers and former friends: one who gave a kidney to a stranger, and one who wrote a story about it.

What do fictional characters eat?

Would you like to try plomeek soup, a Vulcan staple? It’s one of the recipes Chelsea Monroe-Cassel is developing for “The Star Trek Cookbook,” and she watched hours of episodes to determine what might go into the reddish soup. (She settled on tomato, strawberry and a sprinkle of balsamic.)

Pop-culture cookbooks have been around for decades — including entries from “The Dark Shadows” and “The Partridge Family” in the ’70s — though they’ve usually been novelties, with recipes that are simply named after characters. But, as Priya Krishna reports, recent hits like “The Unofficial Harry Potter Cookbook,” which sold more than one million copies, showed the genre could be lucrative. Publishers devoted more resources, and authors put in more care, creating recipes that accounted for the climates of the fictional worlds and the characters’ food preferences.

The ideal subject for a cookbook is one with an invested fan base. “People may love a series like ‘Survivor,’” said Brendan O’Neill, the editor in chief of Adams Media, “but there is a bit of a disconnect between that and a cultural phenomenon and fan engagement you see on ‘Harry Potter’ and ‘The Simpsons’ where this universe exists.”

This mushroom potpie deserves to be on your cooking bucket list this fall.

Oak Island is just 50 miles from Times Square — yet there is no public electricity or water, and not a single store or restaurant. “Doing it yourself” is basically the only option.

Find your next great read among the finalists of this year’s National Book Awards.

That’s it for today’s briefing. See you next time. — Natasha

P.S. A hidden haiku from The Times’s coverage of the debt ceiling fight: “With every passing / day, the crisis becomes more / unavoidable.”

The latest episode of “The Daily” is about a pivotal U.S. Supreme Court term.

Sanam Yar wrote today’s Arts and Ideas. You can reach Natasha and the team at [email protected].