We’re covering a rare spike in cases in New York City, Hong Kongers facing China’s courts and how Australia became a leader in solar energy use. 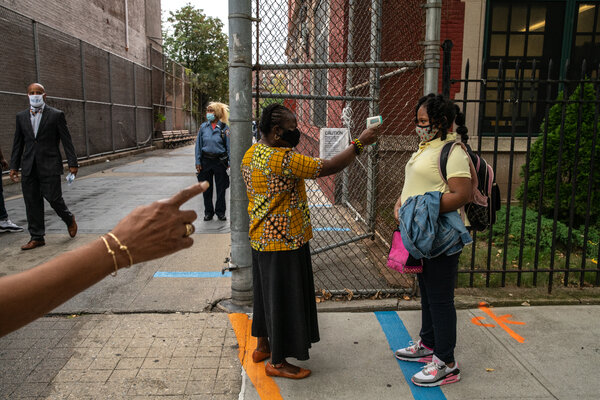 Officials announced on Tuesday a daily rate of 3.25 percent in positive coronavirus tests, a jump after over a month at around 1 percent. The mayor called it “cause for real concern.”

The uptick comes at a crucial moment, when the city is sending hundreds of thousands of students back to school for in-person learning. Indoor dining is starting again on Wednesday.

Though still low compared with the rest of the U.S., the surge is a worrisome sign in a former epicenter that underwent a turnaround. “A cluster today can be community spread tomorrow,” Gov. Andrew Cuomo said. The clusters overlapped with Orthodox Jewish communities, he said.

What’s next: The city moved on Tuesday to impose fines to anyone not wearing a mask. The mayor said he would shut down classrooms if the positivity rate exceeded 3 percent over a seven-day rolling average. Officials also weighed closures of businesses and day cares in certain areas, as well as limits on gatherings.

South Korea is bracing for the Chuseok holiday, which begins this week, and officials urge caution around travel and gatherings.

The Netherlands tightened restrictions and warned that its most severe wave of infections yet was likely to get worse. Indoor gatherings are limited to four people, and masks will be required in Rotterdam, The Hague and Amsterdam.

The pandemic will keep this year’s economic growth rate in East Asia and the Pacific region to 0.9 percent, the lowest since 1967, the World Bank said.

The 12 protesters who were caught by the Chinese Coast Guard as they fled Hong Kong in a speedboat last month have not been allowed to call their families. They are being held without charge in a Chinese detention center and have been barred from meeting lawyers appointed by their relatives.

Soon, they will face criminal charges, likely in the mainland’s murky justice system. Their relatives are concerned about abuses they might face there, where forced confessions and state-approved lawyers are common.

Their fate is a potent reminder of Hong Kongers’ worst fear: trial on the mainland, where courts are controlled by the Communist Party.

Context: Last year, a proposed law that would have allowed the extradition of residents to the mainland triggered large protests. That measure was abandoned, but a new national security law imposed by Beijing in June has tightened China’s grip on Hong Kong. As many as 200 Hong Kong protesters are believed to have fled to Taiwan over the past year.

The Democratic Party’s presidential candidate and former vice president released his 2019 tax returns on Tuesday, which showed that he and his wife had an adjusted gross income of $985,000 last year and paid federal income taxes of $288,000.

A Times investigation of President Trump’s tax data found that he had paid only $750 in federal income taxes in 2016 and in 2017.

Debate: Mr. Biden released his latest tax returns hours before he was to square off with Mr. Trump on live TV for the first time later today. We’ll have live coverage at nytimes.com. Here’s what the polls say and what to watch for.

How Australia became a solar powerhouse

Australia is the second-largest exporter of coal in the world. But the country has also quietly become a renewable energy powerhouse. One in four homes have panels on their roofs, well ahead of Germany, Japan and California, a top solar power user in the U.S.

Most Australians who have embraced solar do not appear to have done so to fight climate change, our reporters write. They are responding to government incentives, lower prices for solar panels and the rise in electricity rates. “This is the economically rational position to take,” said the New South Wales energy minister.

Amnesty International: The human rights organization shut down its operations in India after the government raided its premises and seized its bank accounts. Amnesty said it was targeted by the government of Prime Minister Narendra Modi for its work exposing rights violations in Kashmir and in New Delhi.

Facebook in the Philippines: President Rodrigo Duterte is lashing out at the social media platform after it took down fake accounts promoting his policies. He is even making vague threats to shut it down.

Cardinal Pell: Three years after leaving for Australia to face sexual abuse accusations, and five months after that country’s highest court overturned his conviction on those charges, Cardinal George Pell was expected to return to the Vatican today.

Japan Airlines: The carrier said it would retire the phrase “ladies and gentlemen” from the in-flight announcement, and pledged to use inclusive language.

Snapshot: Above, maskless crowds in Stockholm. After a wave of high death rates when it resisted a lockdown in the spring, Sweden now has one of Europe’s lowest rates of daily new cases. The question is whether the country’s low caseload shows that it has found a sustainable balance or whether the numbers are just a temporary aberration.

What we’re reading: In this GQ interview, the curator of the Black Magazine Covers Instagram account, Donovan X. Ramsey, “explains why he curates an Instagram page on Black magazine covers, how they tell a specific cultural history and why he won’t amplify Kanye,” writes Kim Severson, our Food correspondent.

Cook: This kale and quinoa salad with tofu and miso has enough bite to serve as a meal.

Listen: With many opera houses and concert halls still closed by the pandemic, the musical action has moved online. Here is a selection of 10 highlights to stream in October.

Read: These five books on design focus on the likes of claw foot bathtubs, sommeliers’ gadgetry and mahogany linen chests. Reading them can give comfort at a time like this.

Staying at home can be relaxing and entertaining with our At Home collection of ideas on what to read, cook, watch and do.

A team of Times reporters obtained thousands of pages of President Trump’s tax records showing losses and tax avoidance. Russ Buettner and Susanne Craig, who along with Mike McIntire investigated the tax data, talked to “The Daily” podcast about what they learned.

What information have you both, along with our colleague Mike McIntire, obtained?

What we can see in these is that after 1995, he was still recovering from that billion dollars in losses that he accumulated. He was trying to reinvent himself, branch into new things, but it wasn’t really taking hold. His casinos were failing again.

Susanne: All of a sudden, he has this new financial lifeline — “The Apprentice.”

Russ: Eventually, that wealth stream, just the money from his fame that requires no business expertise, totals $427 million. We’ve now looked at almost 30 or 40 years of Donald Trump’s tax returns and his financial records, analyzed his inheritance. This wellspring that came from “The Apprentice,” that’s an amount of income unlike anything he experienced in any other aspect of his life.

It sounds like a big thing you’re learning is that when it comes to the kinds of deals in which somebody else borrows the Trump name and uses it, Donald Trump is swimming in money, but when it comes to a business that he buys and tries to operate, like a big golf course, those become big financial black holes.

Russ: The less decision-making authority Donald Trump has on a business, the more money that business is going to make. And the more he’s involved in designing a business, setting it up and creating a business plan, the more likely it is to have trouble. He finds himself in 2015 again needing a complete reinvention — and what does he decide to do?

Susanne: The next thing he does is run for president.

Thank you
To Theodore Kim and Jahaan Singh for the break from the news. You can reach the team at [email protected]

P.S.
• We’re listening to “The Daily.” Our latest episode is about the investigation into President Trump’s taxes. (There’s an excerpt in the Back Story).
• Here’s our Mini Crossword, and a clue: Group of whales (three letters). You can find all our puzzles here.
• Our Supreme Court reporter Adam Liptak recently joined ABC Australia’s “RN Breakfast” to discuss Judge Amy Coney Barrett.

Related posts:
Recent Posts
Latest Posts
Italy LOCKDOWN: Officials order bars and gyms to shut as covid cases soar
SNP shamed: Sturgeon’s party ’creating a legacy’ of nothing but ‘division’ in Scotland
Democrats Hope 2020 Is the Year They Flip the Texas House
Barnier under pressure to strike Brexit deal as EU27 finally realise UK market IS valuable
Small airplane crash-lands on Airport Road in Longmont – The Denver Post
This website uses cookies to improve your user experience and to provide you with advertisements that are relevant to your interests. By continuing to browse the site you are agreeing to our use of cookies.Ok