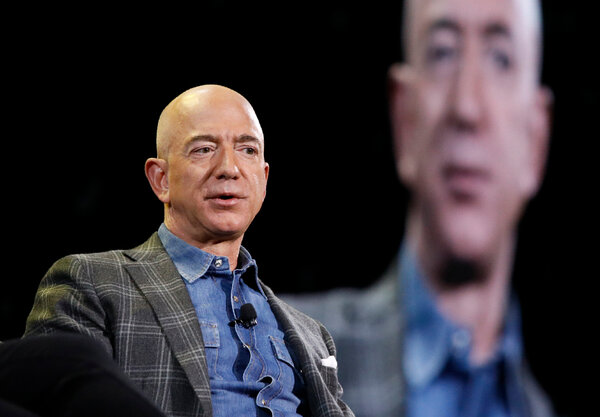 The future was Amazon

Jeff Bezos founded Amazon 27 years ago. He steps down as C.E.O. two days from now. His successor, Andy Jassy, will take over the e-commerce giant on July 5.

It’s obvious to say that America’s economy and society — how we shop, how we communicate, what we watch and the technology we use to do all that — is vastly different than it was in 1994 when Bezos started Amazon. Few other business leaders — Henry Ford, Sam Walton, Steve Jobs — have played as prominent a role in reshaping the economy as Bezos. That sort of influence comes with costs, and raises many important questions.

Back in 2017, on the 20-year anniversary of Amazon going public, Andrew wrote about how Bezos has “an authentic, legitimate claim on having changed the way we live.” He continued:

As an author, I’m supposed to hate Mr. Bezos. After all, he has pressured publishers, cut their margins and practically put old-school bookstores out of business. As if to rub it in, he’s now introducing bricks-and-mortar Amazon bookstores.

But to take that view would be to misunderstand what innovation looks like. It upends industries — witness the current carnage in the retail industry, which has been outmoded by Amazon and all the companies trying to copy it.

After Bezos, what’s the future for Amazon? The founder’s grand vision, for Amazon to become “the everything store,” has been achieved. Now, it’s not just that Bezos is stepping back: The Times’s Karen Weise reports that over the past 18 months there has been unusually high turnover in Amazon’s executive ranks. And all that change is coming as the powers that want to rein in Amazon appear to be growing more powerful:

Amazon was sued in May by the Washington, D.C., district attorney for acting as a monopoly, adding to the federal and state-level inquiries into the company’s business practices.

Lawmakers like Elizabeth Warren and Bernie Sanders have made Amazon a poster child for the need for corporate tax reform.

Taking risks is harder for new leaders. One of the oft-cited reasons for Bezos’s success was his willingness to experiment — and fail. He was able to see 10 steps ahead of where Amazon was at in a given moment. His successor is taking over a time when those steps are getting harder to take.

The push to overhaul the global tax system gains momentum. More than 130 countries — including China, India and Russia — signed onto a plan that included measures like a 15 percent minimum corporate tax rate. Now comes the hard part of working out the details, and getting tax havens like Ireland and Caribbean nations on board.

The U.S. deficit could hit $3 trillion this year. Aggressive stimulus efforts were behind the Congressional Budget Office’s latest estimates, which also upped forecasts for the U.S. economy — it is expected to grow by 6.7 percent this fiscal year, the fastest annual rate since 1984.

More workers find jobs in June, but worries about the labor market persist. Economists expect last month’s payroll gains to top 700,000 when the numbers are released today. Although there are now more job openings than before the pandemic, surveys show that many remain reluctant to return to work.

Donald Trump’s family business is a criminal defendant. New York prosecutors charged the Trump Organization with running a 15-year scheme to help executives avoid paying taxes by compensating them off the books. The charges could lay the groundwork for a bigger investigation into Trump himself.

The Boy Scouts of America reaches an $850 million settlement with victims of child sex abuse. The settlement would be one of the largest of its kind in the U.S., but lawyers representing 60,000 victims and the Boy Scouts’ insurers continue to negotiate a potentially bigger resolution.

A cheat sheet for Robinhood’s I.P.O.

Robinhood finally pulled back the curtain on its inner workings yesterday when it published the prospectus for its public listing. Over more than 300 pages, the document details how the trading app makes money, describes its biggest risks and more. We picked through it to highlight some of the most important bits.

Robinhood is growing fast, and flirting with profitability. The company reported $959 million in revenue last year, more than tripling from 2019, and was able to turn a profit of $7 million. However, it lost $1.4 billion in the first three months of this year, though a large part of that was tied to accounting for the $1 billion it raised from investors during the meme-stock frenzy. As of the first quarter, it had about 18 million funded user accounts and oversaw $80 billion in customer assets.

Its business model comes with a lot of risks. The section of the document outlining potential legal and regulatory pitfalls is roughly 5,600 words long. The filing also said that payment for order flow — in which Robinhood is paid by market makers to give them customers’ trade orders to be fulfilled — represents 75 percent of revenue (and is under scrutiny by regulators). And margin lending, which allows investors to buy stock with borrowed funds, rose $2 billion in the first quarter alone, to $5.3 billion.

What we still don’t know: How much money Robinhood plans to raise from the offering; just how much stock Robinhood’s co-founders, Vlad Tenev and Baiju Bhatt, hold; and how much the two plan to sell in the I.P.O., if any.

Other factoids from the filing:

“Dogecoin” appears 10 times. A third of Robinhood’s revenue from crypto trades in the first quarter was tied to the joke cryptocurrency.

“Confetti” appears twice, to note that the company no longer uses animated celebrations of trades, a practice repeatedly criticized by regulators for hooking customers.

Tenev’s cellphone had been subpoenaed by federal investigators examining the company’s trading halts during the meme-stock frenzy.

“Big Tech has a sense of arrogance that they can take over an industry segment and disrupt it entirely. So far in gaming, they all suck at that.”

— Joost van Dreunen, a New York University professor who studies the business of video games, on why Amazon, Facebook and Google have had a hard time winning over gamers.

The Supreme Court yesterday sided with charities that had sued California over a rule that they were required to reveal the identities of major donors to state officials. The rule created “an unnecessary risk of chilling” the freedom of association by potentially hurting donations to charities and subjecting donors to possible harassment, wrote Chief Justice John Roberts. He was joined by the five other conservative justices, making it a 6-3 vote. The liberal wing of the court, per Justice Sonia Sotomayor, wrote that the plaintiffs didn’t demonstrate that they were “reasonably chilled” by the rule.

The case has implications for money in politics, or so say some lawmakers. Americans for Prosperity Foundation, a libertarian Koch-funded tax-exempt organization, was one of the plaintiffs. It gathered allies across the ideological spectrum who argued for maintaining donor anonymity. A group of Democratic senators also wrote to the court, saying that a win for the plaintiffs would make it easier to exert secret influence over politics by channeling unlimited “dark” money to political causes via nonprofit groups.

“We are now on a clear path to enshrining a constitutional right to anonymous spending in our democracy, and securing an upper hand for dark-money influence in perpetuity,” Senator Sheldon Whitehouse, Democrat of Rhode Island, said in a statement in response to the court’s ruling.

Shares of Torrid, the plus-sized retailer, rose 15 percent on its first day as a public company yesterday (under the ticker “CURV”), giving it a market cap of nearly $3 billion. Torrid is backed by the private equity firm Sycamore Partners, which acquired the company as part of its deal for Hot Topic. Liz Muñoz, the company’s C.E.O., spoke with DealBook about what comes next.

On how the pandemic affected clothing trends:

“The customer’s needs really changed toward more comfort-type products,” Muñoz said. “But what was interesting was that at the same time she was going after comfort, she was going after very sexy lingerie. And, I mean, it makes sense, you’re home a lot.”

On the state of the plus-sized retail market:

“This is an industry that has difficulty understanding what this customer wants, or a lack of interest in finding out,” Muñoz said. More brands are paying attention now, she noted, driven by “a handful of women that went on social media and said, ‘you are not going to continue to ignore us.’” Torrid’s focus on fit, like pockets sewn into the fly and flattening the inside of garments, has led to a loyal customer base. Repeat customers accounted for more than 80 percent of sales last year.

On bras as a bellwether:

Torrid sees its biggest post-I.P.O. opportunities in devoting more resources to marketing — and bras. “A customer that buys a bra from us in the first year that she’s with us is three times more valuable than one that doesn’t,” Muñoz said.

Shares in Krispy Kreme rebounded from a disappointing I.P.O. pricing to close up nearly 24 percent. (Bloomberg)

Blackstone and others including Jay-Z’s Roc Nation purchased a majority stake in Certified Collectibles, valuing the memorabilia firm at $500 million. (Bloomberg)

A $29 billion federal rescue program for the restaurant industry closed after doling out a fraction of the money applicants requested. (NYT)

Britain’s finance minister, Rishi Sunak, unveiled regulatory changes that would create a bigger gulf between the banking industry in London and the rest of Europe. (FT)

More than 200 prominent women, including actors and former government leaders, urged tech giants to “prioritize the safety of women” on their platforms. (NYT)

Virgin Galactic plans to launch Richard Branson into space as soon as July 11, edging out fellow billionaire Jeff Bezos to be first into orbit. (NYT)

Joe Rogan has a huge platform, but his fans still see him as an outsider. (NYT)

“They Didn’t Expect to Retire Early. The Pandemic Changed Their Plans.” (NYT)

Where some of the biggest Fourth of July blowouts are happening around the country. (Thrillist)

We’d like your feedback. Please email thoughts and suggestions to [email protected]