SYDNEY (Reuters) – Asian stocks rallied on Tuesday as the U.S. Federal Reserve’s sweeping pledge to spend whatever it took to stabilize the financial system eased debt market pressures, even if it could not offset the immediate economic hit of the coronavirus. 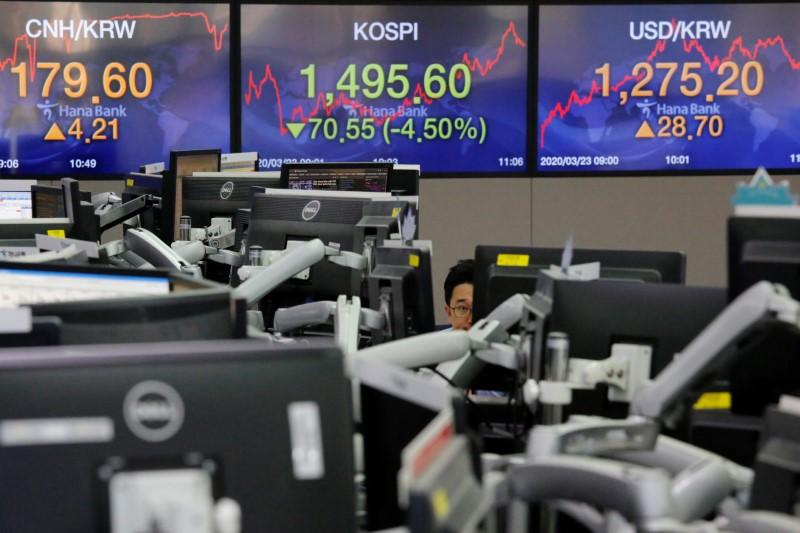 While Wall Street seemed unimpressed, investors in Asia were encouraged enough to lift E-Mini futures for the S&P 500 ESc1 by 1.9% and Japan’s Nikkei .N225 by 4.9%.

MSCI’s broadest index of Asia-Pacific shares outside Japan .MIAPJ0000PUS added 1.2%, though that followed a drop of almost 6% on Monday. South Korea .KS11 and Australia also recouped a little of their recent losses.

In its latest drastic step, the Fed offered to buy unlimited amounts of assets to steady markets and expanded its mandate to corporate and muni bonds.

The numbers were certainly large, with analysts estimating the package could make $4 trillion or more in loans to non-financial firms.

“This open-ended and massively stepped-up program of QE is a very clear signal that the Fed will do all that is needed to maintain the integrity and liquidity of the Treasury market, key asset-backed markets and other core markets,” said David de Garis, a director of economics at NAB.

“COVID-19 developments remain the wild card, as is the development of government policies to support cash flow and the economy.”

The Fed’s package helped calm nerves in bond markets where yields on two-year Treasuries hit their lowest sine 2013, while 10-year yields dropped back sharply to 0.77% US10YT=RR.

Yet analysts fear it will do little to offset the near-term economic damage done by mass lockdowns and layoffs.

Speculation is mounting data due on Thursday will show U.S. jobless claims rose an eye-watering 1 million last week, with forecasts ranging as high as 4 million.

Goldman Sachs warned the U.S. economic growth could contract by 24% in the second quarter, two-and-a-half times as large as the previous postwar record.

A range of flash surveys on European and U.S. manufacturing for March are due later on Tuesday and are expected to show deep declines into recessionary territory.

While governments around the globe are launching ever-larger fiscal stimulus packages, the latest U.S. effort remains stalled in the Senate as Democrats said it contained too little money for hospitals and not enough limits on funds for big business.

The logjam combined with the stimulus splash from the Fed to take a little of the shine off the U.S. dollar, though it remains in demand as a global store of liquidity.

“The special role of the USD in the world’s financial system – it is used globally in a range of transactions such as commodity pricing, bond issuance and international bank lending – means USD liquidity is at a premium,” said CBA economist Joseph Capurso.

“While liquidity is an issue, the USD will remain strong.”