Walmart’s planned investment in TikTok is being called “transformative.” Another analyst predicted the deal could “redefine retail” across the industry. “It is a bigger-picture opportunity,” said Oliver Chen, a retail analyst at Cowen.

Known for its homogeneous big-box stores in rural and suburban America, Walmart’s newly announced multibillion dollar stake in a video app that is synonymous with the fun digital lives of young people has turned more than a few heads.

Like in the early days of many tech investments by large corporations, the details of how Walmart will use TikTok are fuzzy. But one thing is clear: Walmart now has something that its rival Amazon does not. It can engage with consumers not just when they are buying something on the retailer’s website, but while they are creating and consuming viral videos.

The retailer could, for example, embed advertisements in the user-generated videos with links to the Walmart website or siphon data from the site’s tens of millions of users to glean their shopping habits based on the content they post.

The intrigue surrounding the plan by Walmart and its co-investor in TikTok, Oracle, has been heightened by the geopolitics of the deal, which President Trump threatened to block if China retains any ownership in the company.

But away from the world stage, Walmart has been making a series of moves that are already transforming the company and, by extension, the broader U.S. retail sector.

Most have involved groceries, a mundane business that seems a far cry from TikTok videos. But it has helped Walmart gain one advantage over Amazon, particularly during the pandemic. Online grocery pickup, which allows customers to order their food online and retrieve it outside the store, is at the center of this strategy.

This month, Walmart announced a new subscription delivery service called Walmart+, which some have billed as the company’s answer to Amazon Prime. For $98 a year and minimum orders of $35, customers can have unlimited deliveries to their homes.

Walmart’s service is centered on using most of its 4,700 stores as miniature e-commerce warehouses. Because the stores are close to customers’ homes, that shorter delivery time should reduce costs for Walmart and keep food fresher.

Amazon has been offering similar services from its Whole Foods stores, but does not have nearly the same physical footprint as Walmart.

“You see Amazon following behind Walmart on this,’’ said Edward Yruma, a retail analyst at KeyBanc Capital Markets. 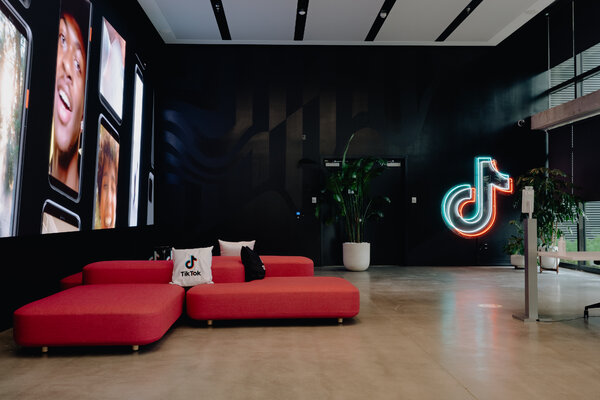 Driven by online grocery sales, Walmart’s overall e-commerce sales nearly doubled in the latest quarter. It may be difficult to keep growing at that rate, though, as other large grocers like Albertsons and Kroger start to ramp up their online ordering and curbside grocery pickup.

Success in online grocery has led to more hiring, which is significant for Walmart, the nation’s largest private employer. The company’s head count had been relatively steady for several years. But the pandemic has required more help, as shoppers have come to stock up amid the lockdowns.

Walmart has increased its work force by 14 percent since last year, according to Drew Holler, head of human resources at Walmart’s U.S. stores.

Last week, the company announced it was overhauling management roles in its supercenters, a move that has big implications for how many of its 1.5 million employees are paid and promoted.

Some jobs overseeing traditional in-store departments are being phased out, while other store employees in departments like bakery and automotive care are receiving pay raises.

“We are repositioning our stores for what we think the future of retail is going to look like,” Mr. Holler said in an interview.

To that end, some analysts say that Walmart should be investing in the stores and e-commerce infrastructure rather than spending billions on investments like TikTok.

Scott Mushkin, founder of the consumer research firm R5 Capital and a longtime Wall Street analyst, said Walmart should be focusing more on automating its online grocery process to reduce costs or even boosting its fresh food offerings.

Even with the subscription fees for Walmart+, Mr. Mushkin and other analysts calculate that the retailer will lose money on each home delivery.

“Maybe TikTok is a magic wand,” Mr. Mushkin said. “But why blow money on a deal like that when they could be investing in automation in the grocery-picking process?”

Other analysts say that the Walmart+ offering, after much fanfare and anticipation, will never be able to compete with Prime, which has no minimum order and includes streaming entertainment.

The major Walmart+ perk is a 5-cent-a-gallon discount at affiliated gas stations.

“It is not as powerful as we what imagined,” analysts at Morgan Stanley wrote in a research note this week. In June, before the details of the services were announced, the investment bank had predicted that as many as 20 million people could sign up within a few months and that Walmart’s stock would soar in value.

In a statement this weekend, Walmart said that TikTok would be “an important way for us to expand our reach and serve omnichannel customers as well as grow our third-party marketplace, fulfillment and advertising businesses.”

The proposed investment in TikTok all sounds rather vague, but many analysts said they were willing to give Walmart time to work out the details.

“The future of retail is community engagement where users are creating content,” said Mr. Chen, the Cowen analyst. “Walmart is taking a very proactive stance.”

Related posts:
Recent Posts
Latest Posts
Woman splashes out extra £100k on perfect home for spoiled sausage dog
Covid 19 coronavirus: My life as a human guinea pig on Oxford vaccine trial
Donald Trump second term: ‘Aggressive’ Trump would intensify arms race with 2020 win
U.S. business activity picks up in October: IHS Markit
Nicola Sturgeon furious as she demands Rishi Sunak PAY UP on Covid – ‘NOT a PENNY so far!’
This website uses cookies to improve your user experience and to provide you with advertisements that are relevant to your interests. By continuing to browse the site you are agreeing to our use of cookies.Ok