In the 1970s, Greg Steltenpohl and his hippie friends in Santa Cruz, Calif., bought a juicer for $250, began squeezing fresh orange juice and sold it out of the back of a Volkswagen van to support their real passion: playing jazz.

Their little start-up quickly evolved, and by 1980 Mr. Steltenpohl and his friends had become pioneers in the premium fresh juice sector with a company they called Odwalla, named for a song-poem by the Art Ensemble of Chicago. With Odwalla’s natural ingredients and catchy branding, sales had climbed to $59 million by 1996. But the company was suddenly short-circuited that year by an E. coli outbreak in its raw apple juice, which killed a toddler and sickened scores of other consumers. Much of the company’s revenue vanished almost overnight.

Mr. Steltenpohl, devastated by the harm his product had caused, left the company in 1998. But he regrouped. And after several years of smaller hits and misses, he built another company, Califia Farms, which makes almond milk, cold-brewed coffee and other nondairy products. Califia, with its distinctive carafe-shaped bottles, is now one of the most successful brands in the nearly $20 billion plant-based beverage industry.

“For him to get blown up and then come back and do it again — that’s really rare,” Kiff Gallagher, a longtime friend who also worked with Mr. Steltenpohl, said in a phone interview. “Especially to do it in a way that was aligned with his values,” he added, referring to Mr. Steltenpohl’s commitment to being socially responsible, promoting wellness and protecting the environment.

“Anybody can talk about it,” Mr. Gallagher said, “but he showed that it was possible.”

Mr. Steltenpohl died on March 11 at a hospital in Los Angeles. He was 67.

His son, Eli, said the cause was complications of a liver transplant he had nine years earlier.

Mr. Steltenpohl believed that one could do well by doing good, and he became an early pied piper for the idea that investors should consider environmental, social and good-governance factors when evaluating potential business opportunities.

Odwalla was an immediate success, and it scored several public relations coups. When Pope John Paul II visited Monterey in 1987, he was photographed holding a bottle of Odwalla juice. The brand was a favorite of President Bill Clinton. And Steve Jobs often carried a bottle during his Apple presentations. Odwalla went public in 1993. 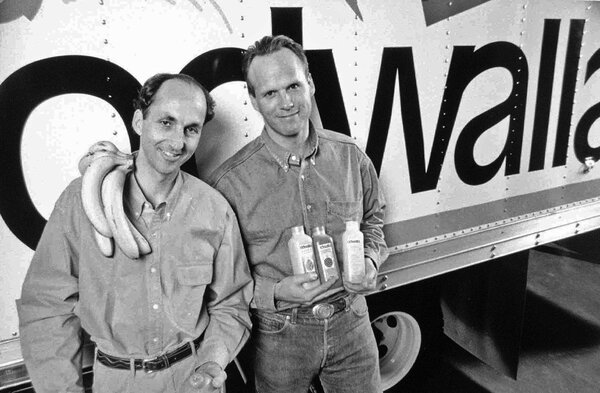 But it was partly Mr. Steltenpohl’s much-touted dedication to the purity of his product that contributed to the calamity of the E. coli outbreak.

Most companies pasteurize their juices with high heat to destroy bacteria and prolong shelf life. Odwalla thought this unnatural process would interfere with the flavor, and instead froze its juices, which protected their nutrient enzymes, micro-organisms and taste.

But it did not kill all the bacteria, and in 1996, a 16-month-old girl died after drinking Odwalla apple juice. More than 60 other people fell ill.

Mr. Steltenpohl was generally praised for his quick response. He immediately recalled all apple juice products. He met with the families of some of the victims. The company quickly built a website, an unusual feature in those days, where it kept consumers up-to-date on what it was learning and where to get help. It also discarded one of its founding principles — that fresh was best — and started pasteurizing its apple juice.

But pasteurization was not the only issue. The New York Times later found that in the weeks before the outbreak, Odwalla, in response to high production demands, had begun lowering its standards for accepting blemished fruit. And on the day the contaminated juice was pressed, production managers ignored warnings from a company inspector that a batch of apples was too rotten to use without taking special precautions against contaminants.

With the company’s words about social responsibility coming back to haunt it, Odwalla pleaded guilty in 1998 to violating federal food safety laws in what officials said was the first criminal conviction in a large-scale food-poisoning outbreak in the United States. It also agreed to pay a $1.5 million fine and paid millions more to settle several civil suits.

“The E. coli crisis was a very difficult period for my dad, for the company and for him personally,” Eli Steltenpohl said in an interview. “He was really shaken and heartbroken. It was the total antithesis of the company’s vision of bringing health to people.”

During this period, Mr. Steltenpohl consulted one of his mentors, Mr. Jobs, who at the time was staging his famous boardroom coup at Apple to try to turn that company around.

“Steve encouraged him to think outside the box and to look at the moment as one of an opportunity for innovation and progressive thinking and not as a defeat,” Eli Steltenpohl said. “That certainly gave my dad some necessary fire to pull through.”

Odwalla never fully recovered. With the company on the verge of bankruptcy, its founders were forced to sell a controlling interest to private equity firms.

The Coca-Cola Company acquired Odwalla in 2001 for $181 million, then shut it down last year. In doing so, Coke cited a need for corporate efficiencies and a consumer preference for less sugary drinks, though Mr. Steltenpohl had told The Times in 2016 that Coke never maximized the potential of the brand.

“This is not what my dad envisioned for Odwalla,” his son said. “But that made the success of Califia that much sweeter.”

In 2010, Mr. Steltenpohl was planning to start another juice company, but he switched gears when he saw the coming wave of nondairy milk alternatives made from nuts, coconut, oats and soy. While he was recovering from his liver transplant surgery, the hospital gave him a protein drink; he found it so distasteful, he told The Times in 2016, that he was inspired to do better, and he was soon churning out premium almond milk, ready-to-drink coffees and barista blends.

He named the new company for Queen Califia, a character in a 16th-century Spanish novel who became the spirit of colonial California. Having learned hard lessons from Odwalla, he insisted on tight quality control, less sugar and more nutrition, and on keeping an independent ethos. By 2017, Califia’s bottled coffee was No. 1 in the United States.

Greg Andrew Steltenpohl was born on Oct. 20, 1954, in Homestead, Fla. His mother, Benita (Desjardins) Steltenpohl, was a culinary entrepreneur and chef. His father, Jerome, was a civil engineer who moved the family in the 1950s to Southern California, where he worked for defense contractors. Greg grew up in the San Bernardino area.

He majored in environmental sciences at Stanford and graduated in 1977. He then moved to Santa Cruz, where he and his friends started selling juice to sustain their band, the Stance, in which he played saxophone.

“We’d deliver the juice to restaurants in the morning, study in the afternoon and play jazz in clubs at night,” he told The San Francisco Chronicle in 1993. His partners in both music and business included Jeannine Bonstelle (Bonnie) Bassett, a singer, whom he married in 1985, and Gerry Percy, who played keyboards.

In addition to his son, Mr. Steltenpohl is survived by his sister, Jan Johnson; his stepsons, Justin and Kevin Meade; and a grandson.

Mr. Steltenpohl stepped down as chief executive of Califia Farms in September, although he remained on the company’s board. He bought a house near Mono Lake in central California, giving him easier access to the Sierra Nevada, where he liked to hike and rock climb. He was looking forward to spending more time with his grandson, Theodor, when complications from his liver transplant began to develop.

He was proud that Califia had remained independent all these years, having told the BBC in 2017 that he hoped that one day the ability to resist a corporate takeover would become part of a new metric of success.

Instead of celebrating quarterly reports, he said, “wouldn’t it be great if we were saying, ‘Wow, they managed to stay independent for 20 years, stayed true to their values, and they grew their sales too’?”