Since the pandemic sent workers home last year, a slew of modifications have been made to office buildings to protect against the spread of the coronavirus. Now, as companies prepare to bring workers back, experts say even more changes are on the way.

Expect expanded gathering spaces and fewer personal workstations, for instance, changes that are being fueled by the success of working from home. Companies like Google, Microsoft and Walmart have already announced proposals for hybrid work models that will allow employees to continue to work remotely at least a few days a week.

These new arrangements mean companies may need less office space, and some have already cut back on their real estate needs, according to a survey from the consulting firm PwC. Target said this month that it was giving up office space in downtown Minneapolis, and in September, the sporting goods retailer REI sold its newly built headquarters in Bellevue, Wash.

“We really are at an inflection point,” said Meena Krenek, an interior design director at Perkins+Will, an architecture firm that is revamping offices, including its own, for new modes of working.

Last spring, while lockdowns were in place, landlords and tenants prepared for what they thought would be a return to the office in the summer and fall. Desks were dragged six feet apart and Plexiglas barriers installed between them. One-way arrows were stenciled on corridor floors, chairs were removed from conference rooms, and an elaborate choreography was developed to determine how and when teams would return to avoid overcrowding.

Then many workers simply stayed home. As the pandemic dragged on and people got the hang of Zoom, many discovered it was possible to be productive while parked on living room sofas or in backyard lawn chairs.

Now, as company heads are again planning for a return to the office, not only safety measures but also the new work arrangements are driving discussions about the postpandemic workplace. More than 80 percent of companies are embracing a hybrid model whereby employees will be in the office three days a week, according to a new survey by KayoCloud, a real estate technology platform.

Workplaces are being reimagined for activities benefiting from face-to-face interaction, including collaboration on projects and employee training, as a way to promote a company’s culture and identity. 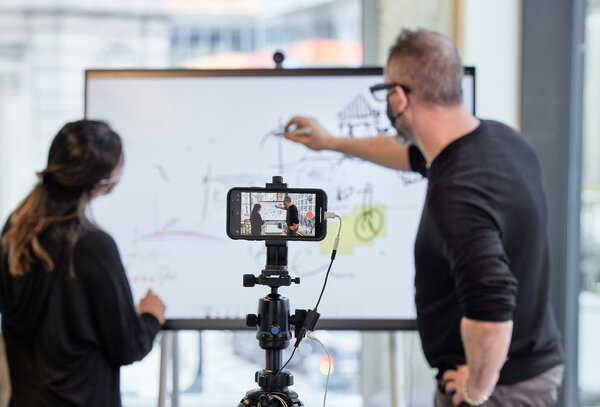 Common areas will be increased and equipped with furniture that can be moved as needs change. Steelcase and Knoll, suppliers of office furniture, report strong interest in mobile tables, carts and partitions.

But as the amount of space devoted to gathering expands, the fate of one’s own personal turf at the office — a desk decorated with family photos, a couple of file cabinets — hangs in the balance. Why, company leaders are asking, should someone who is in the office one or two days a week require a space that will sit empty the rest of the time?

In some cases, personal desks are being replaced with “hoteling” workstations, also called hot desks, which can be used by whoever needs a place to touch down for a day.

In the early months of the pandemic, when it was believed that the coronavirus was spread via contaminated surfaces, hot desks got a hard no from office users. But that stance has softened with the recognition that the virus is transmitted mainly through the air. Protocols for wiping down tabletops before and after use have become the norm. So has reserving a hot desk ahead of time rather than simply showing up and grabbing a free spot.

Workers have often resisted the loss of their personal desks when companies sought to reduce their real estate footprint, but they may be more amenable to the idea now if the payoff is the ability to skip the commute and work from home.

“A year ago, if I had interviewed people, they would have said they definitely need three file cabinets and a bookshelf,” said Andrea Vanecko, a principal at the architecture firm NBBJ. “Now there’s a very different answer.”

Conference rooms, too, are getting a reboot. In the past, these rooms were predicated on the idea of people gathering in person. A large screen on a wall might be used for presentations or to let an executive in another location make a cameo appearance.

But some employees are permanently moving to remote work, and companies are puzzling over how to give them the same ability to participate as those who are physically present. There are even early discussions about using artificial intelligence to conjure up holographic representations of employees who are off site but could still take a seat at the table.

For now, some companies are having in-person attendees continue to use their laptops so that remote workers can see everyone on their Zoom screens, an effort to “help maintain a sense of equivalency that we’ve come to expect,” said Peter Knutson, chief strategy officer of A+I, a design firm.

Devices combining 360-degree cameras, microphones and speakers are being placed on a table or tripod to improve sound and visibility. In the future, these technologies are likely to be built into gathering places and the number of screens increased, transforming the conference room into a “Zoom room,” Ms. Krenek said.

Likewise, some phone booths — the closet-size pods deployed in open-plan offices to give workers a place to make private calls — may give way to videoconferencing booths, which some manufacturers have introduced with built-in screens.

Screens are destined to pop up elsewhere. One near the coffee bar or at a cafe table could allow those on the premises to meet virtually for a latte or lunch with colleagues working remotely.

And digital whiteboards are likely to become more popular, so workers at home can see what’s being written in real time.

Modifications made to offices to protect against the coronavirus are still in effect. Stopgap measures may fade away as the pandemic loosens its grip, but others will be here to stay.

In lobbies, floor decals spaced six feet apart may be around “just until people get into the habit,” said Natalie Engels, a principal at Gensler, an architecture firm. Signs that had proliferated during the pandemic — promoting “self-cleaning” elevator buttons and virus-zapping technologies like ionization and ultraviolet light — will eventually be removed.

But increasingly, moving through an office building is likely to be a hands-free experience aided by mobile apps, sensors and voice controls, even after the reluctance to touch surfaces diminishes.

Sensors will allow employees to enter a turnstile and summon an elevator with the wave of a hand. Landlords who have yet to invest in such systems have experimented with foot pedals to activate elevators. Buttons on walls outside restrooms can be pressed with an elbow, averting the need to touch door handles. Some companies are adding foot-operated door openers.

The coronavirus has focused attention on air quality in what may be a lasting way. Outdoor spaces — roofs, terraces and courtyards — were popular before the pandemic and have become more so as fresh air has gone from being a nicety to being a necessity.

Landlords have in some cases adjusted HVAC systems to increase the amount of outdoor air being pumped in. They are also upgrading filters to trap smaller airborne particles.

Some measures are being enshrined in leases, said Geoffrey F. Fay, a real estate lawyer with Pullman & Comley. But landlords are doing such things proactively, he added, as they try to make offices as enticing as possible at a time when tenants may be wondering if they even need to rent space anymore.

“Landlords realize we are on the precipice of change,” he said. “They want to make employees feel comfortable to the extent they’re coming back to the office.”