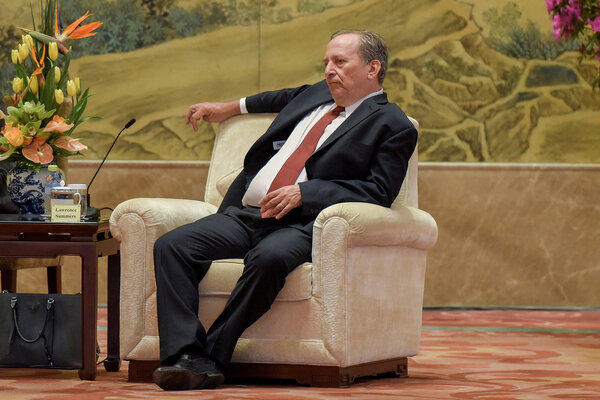 Too much of a good thing?

With the end of the pandemic coming ever closer and the Biden administration pouring trillions into recovery initiatives, economists are debating whether the government risks going too far, stoking runaway inflation. But as our colleague Neil Irwin at the Upshot asks: How will we know if the economy is running too hot?

Economists acknowledge that some rise in inflation is inevitable, as demand for certain goods and services outstrips supply. (Other events, like strained supply chains, are also pushing up prices.) Where they disagree is over the severity of the inflation that will result:

The Biden administration and its allies think that prices will recalibrate, unemployment will fall and inflation will stabilize at a manageable level.

Skeptics worry that people will believe elevated inflation is the new normal, leading to climbing prices, demands for higher wages, a weakening dollar and higher interest rates on government debt. That could prompt policymakers to intervene forcefully — and set off a recession.

Ten economists explained what the warning signs of an overheating economy would look like. A summary of common themes:

Several, like Greg Mankiw and Jason Furman of Harvard, said they would start to worry about several years of inflation above 3 percent.

Others, like Austan Goolsbee of the University of Chicago and Claudia Sahm of the Jain Family Institute, are looking out for a significant acceleration in inflation, as happened in the 1970s.

Wendy Edelberg of the Brookings Institution is watching for signs that people believe an economic overheating is permanent, like a housing and construction boom and high readings in the five-year, five-year forward inflation expectation rate.

Larry Summers, who recently kicked the debate into higher gear, thinks there are roughly equal odds that everything will turn out fine, that ever-rising inflation will set in and that the Fed will crash the economy to stop that from happening.

AstraZeneca releases updated data on its coronavirus vaccine. The drug maker said that newer results from clinical trials had showed an efficacy rate of 76 percent, slightly lower than it reported earlier. U.S. officials had questioned why newer data wasn’t included in AstraZeneca’s original announcement. (There are still a few potential cases not yet factored into the results.)

China considers taking more control over internet users’ data. Beijing has reportedly proposed creating a joint venture with domestic tech platforms that would oversee all of the personal information, according to Bloomberg. It comes as the Chinese government tightens the reins on tech giants like Alibaba and Tencent.

First-day pops in the prices of SPAC offerings are fading. Shares in blank-check firms had routinely jumped on their first day of trading, but nearly all of the I.P.O.s this week closed below their offer price. Supply may have swamped demand for the red-hot acquisition vehicles, which have raised nearly $100 billion this year.

The S.E.C. may be investigating SoftBank over its “Nasdaq whale” trades. The short-selling firm Plainview published a letter purportedly from the agency, obtained via a Freedom of Information Act request, that says “the investigation from which you seek records is still active and ongoing.” SoftBank has been under scrutiny over its huge market-moving bets on stock options tied to tech companies last year.

Financial firms combat employee burnout with … cash. Credit Suisse will pay junior bankers a $20,000 bonus in an acknowledgment of “unprecedented deal volume.” And amid departures of younger employees, Apollo Global Management has offered some associates up to $200,000 to stay through late 2022.

Today, at noon Eastern, a trio of tech execs will be grilled by a House committee about how disinformation spreads on their platforms. It’s the first time the chiefs of Google, Facebook and Twitter will appear virtually before Congress during the Biden administration. It’s also the first chance for lawmakers to question the tech bosses since the Jan. 6 Capitol riot, and the role their companies played in the event is sure to be a point of discussion.

The C.E.O.s know the drill by now. A series of hearings in recent years have given the executives experience in absorbing attacks and sticking to their talking points. Since 2018, Google’s Sundar Pichai has testified three times, Twitter’s Jack Dorsey four times and Facebook’s Mark Zuckerberg six times. Their prepared testimonies hint at what is to come today, if they stick to their scripts.

A hot topic will be Section 230, the law that shields platforms from liability for user-generated content. (Here is a handy explainer about it.) Before the hearing, researchers from Harvard and N.Y.U. presented recommendations to Congress and the White House on regulating disinformation online, including “carve-outs” to Section 230.

Facebook has long adopted the stance that it welcomes more rules. Today, according to his prepared opening remarks, Mr. Zuckerberg will say that companies should earn their right to claim protection from liability by showing that they have strong systems to monitor content.

Mr. Pichai will warn that a Section 230 overhaul, or a wholesale repeal, would harm free expression on the internet.

Mr. Dorsey will not mention the controversial liability shield, based on his prepared remarks, though he is highly likely to face questions about it.

Misinformation is a life-or-death issue, according to a letter from 12 attorneys general that was sent to Twitter and Facebook yesterday, seeking help to stop the spread of vaccine misinformation. “Unfortunately,” they wrote, “misinformation disseminated via your platforms has increased vaccine hesitancy, which will slow economic recovery and, more importantly, ultimately cause even more unnecessary deaths.”

The Times’s tech team will run a live briefing from 11:30 a.m. Eastern. You can find it on our business page.

Greenwood, a start-up lender focused on Black and Latino customers, plans to announce today that it has raised $40 million from six of the nation’s biggest banks and other major investors. Its founders — including the entrepreneur Ryan Glover and the rapper and activist Michael Render, a.k.a. Killer Mike — are aiming to make services like checking accounts and loans more equitable.

Black and Latino customers are underserved by traditional banks. Nearly 17 percent of Black households and 14 percent of Latino households lacked basic financial services in 2017, the last year for which F.D.I.C. statistics are available, compared with 3 percent of white families. Poor access to banking services can result in more banking fees, such as A.T.M. and overdraft charges. In a Bankrate survey conducted last year, people of color reported paying more than twice as much as white respondents did in banking fees each month.

Truist, the bank formed from the merger of SunTrust and BB&T, is leading Greenwood’s fund-raising round. Vanessa Vreeland, who leads Truist’s venture arm, said the investment met its goals of investing in a natively digital banking start-up and backing minority entrepreneurs.

Greenwood itself won’t hold deposits or make loans. Instead, it will connect customers with minority deposit institutions and community development financial institutions, which will handle back-end tasks like underwriting loans. Mr. Glover said this was a way to support those lenders: “Without Black banks, there would be many in our community who would have not had any other opportunities,” he said.

The company’s first product will be a debit savings account that comes with a black metal debit card. “We’re going to make it cool to bank black,” Mr. Glover said.

— Marlon Nichols of MaC Venture Capital, a majority-Black-owned firm that will announce plans today for a $103 million seed fund from investors including Bank of America, Goldman Sachs and Foot Locker

The Securities and Exchange Commission just launched a new web page on environmental, social and governance issues. It’s the latest of many recent moves by Allison Herren Lee, the acting chair, to meet investor demand for corporate accountability. Now, her actions have generated a request for more transparency from the S.E.C. itself.

Pat Toomey has questions about “the scope and intention” of the S.E.C.’s actions. The Republican from Pennsylvania, who is the ranking member of the Senate Banking Committee, wants a briefing about the agency’s newly created climate and E.S.G. enforcement task force. Also, he is curious about recent calls for more mandatory corporate disclosures on a range of issues, including political donations. The S.E.C. “should not use enforcement actions as a back door for imposing new regulations on E.S.G. and climate change issues,” the senator wrote in a letter to Ms. Lee yesterday that was shared exclusively with DealBook.

The E.S.G. activity “appears to presage major changes,” he said, noting that the Biden administration’s choice to lead the agency, Gary Gensler, has yet to be confirmed. “Changes would be premature.”

It’s part of a broader debate, with congressional Republicans pushing back against financial regulators who embrace environmental priorities, including at the Fed and Treasury. When it comes to securities, a senior aide to Mr. Toomey said, climate risks are not necessarily material to investors, depending on the type of business. The S.E.C. declined to comment.

Tribune Publishing’s board is backing a takeover bid by Alden Global Capital over a higher offer from a Maryland hotel executive. (NYT)

Dan Snyder is poised to buy out minority owners of the Washington N.F.L. team for $875 million. (NYT)

The Spanish-language broadcaster Grupo Televisa is in talks to combine some of its media assets with its archrival, Univision. (Bloomberg)

Gov. Andrew Cuomo of New York is under scrutiny for giving family members access to Covid-19 testing in the early days of the pandemic, adding to his political troubles. (NYT)

New York State lawmakers struck a deal to legalize the sale of recreational marijuana by next year. (WSJ)

Fidelity announced plans to introduce an exchange-traded fund that tracks the price of Bitcoin. (WSJ)

You can buy this column about NFTs as an NFT, with proceeds going to charity. (NYT)

Ever-growing ship sizes mean that incidents like the blockage of the Suez Canal may become more common. (Bloomberg)

Thanks to a new acquisition, you can text yourself some Taco Bell. (WSJ)