The US is placing further restrictions on Huawei Technologies in a bid to limit the company’s access to electronic components.

The aim is to stop the Chinese company buying computer chips made using US technology, even if they were not designed specifically for Huawei.

It also adds 38 names linked to Huawei to a trade blacklist.

“Huawei has continuously tried to evade” restrictions imposed in May, Secretary of State Mike Pompeo said.

At that time, the US Commerce Department said global chipmakers that used US technology had to obtain a licence from the US government to work on designs for Huawei.

The new order broadens those restrictions, requiring companies to seek permission even if they are selling an “off the shelf” general purpose design.

“As we have restricted its access to US technology, Huawei and its affiliates have worked through third parties to harness US technology in a manner that undermines US national security and foreign policy interests,” US Commerce Secretary Wilbur Ross said.

“This multi-pronged action demonstrates our continuing commitment to impede Huawei’s ability to do so.”

Huawei did not immediately respond to a request for comment. Executives have previously described American restrictions as “arbitrary and pernicious”, while warning investors that the business would be hurt. 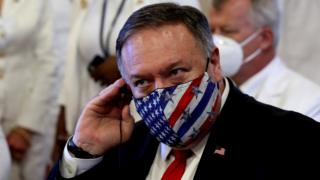 In a meeting in May, the tech giant described how US actions since 2019 had forced it to remake its supply chain, comparing the firm to a plane “riddled with bullet holes”.

The US maintains that Huawei’s technology could be used by the Chinese government and has pressured governments around the world – including the UK – to cut ties with the company, calling it a national security threat.

Huawei has contested those claims, arguing that the US is motivated by economic competition.

Monday’s move against Huawei is one of many punitive measures the US has taken against Chinese technology companies in recent months as relations between the US and China sour.

Earlier this month, Mr Pompeo outlined the steps he wants US companies to take to deal with “untrusted Chinese apps”.

Mr Pompeo said at the time that apps such as TikTok and WeChat posed “significant threats to the personal data of American citizens”.

The US government argues that such apps harvest the data of US citizens and could be exploited by the Chinese Communist Party, which Beijing has denied.