The move, first reported by Retail Week, comes as it deals with a “surge in demand”.

M&S has bought a 50% share of Ocado’s retail business, giving it a full internet-based delivery service.

But its popularity meant Ocado was unable to fulfil a “very small number” of orders when it began on Tuesday.

M&S has replaced Ocado’s previous partner, Waitrose, which is now concentrating on its own Waitrose.com delivery service.

The deal with Ocado comes at a crucial time for M&S, which is cutting 7,000 jobs.

An Ocado spokesperson said: “The M&S launch has been incredibly popular. To help minimise the impact of the surge in demand on our customers, the deliveries for Ocado colleagues were paused for the first few days.

“We are very grateful to everyone at Ocado for how understanding they have been about our decision to prioritise customer deliveries, and also for the heroic efforts everyone has made over the last few months.”

On Tuesday, a number of customers vented their disappointment at having their orders cancelled at the last minute, despite booking them well in advance.

Ocado apologised to those affected, saying “the vast majority” of orders were delivered as normal. 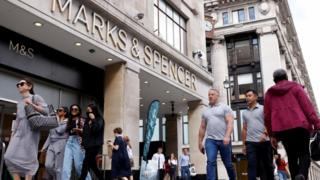 Until now, the only M&S food available online has been party food and celebration dinners to order or, in certain locations, a limited range of about 130 M&S food and household items through Deliveroo.

However, the new service is not available in Scotland. Ocado does not currently operate north of the border and has no plans to do so at present.

M&S has vowed that all its replacement products will be the same price as, or cheaper than, the equivalent Waitrose items.

M&S and Ocado say that their joint offer now amounts to more than 50,000 products, which they say is “double that of the next largest grocery retailer”.

The M&S deal with Ocado was originally announced early last year, well before the onset of the coronavirus pandemic.

However, Covid-19 has exacerbated existing problems for M&S, which has struggled to restore the fortunes of its hard-hit clothing and home goods divisions since shops reopened after lockdown.