A proposal to retroactively lift a limit on state and local tax deductions would largely funnel money to relatively high earners in high-tax states. 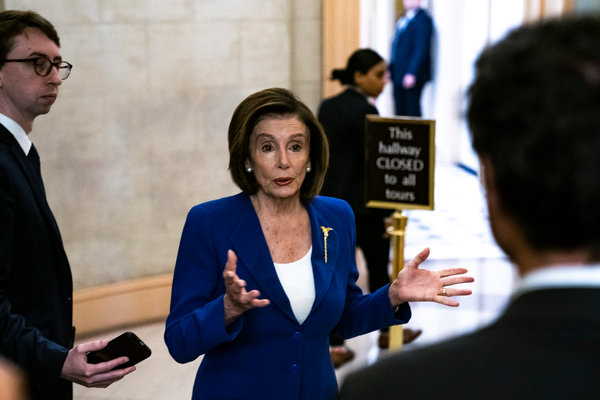 By Jim Tankersley and Emily Cochrane

WASHINGTON — As lawmakers prepare for another round of fiscal stimulus to address economic fallout from the coronavirus pandemic, Speaker Nancy Pelosi suggested the next package include a retroactive rollback of a tax change that hurt high earners in states like New York and California.

A full rollback of the limit on the state and local tax deduction, or SALT, would provide a quick cash infusion in the form of increased tax rebates to an estimated 13 million American households — nearly all of which earn at least $100,000 a year.

In an interview with The New York Times, Ms. Pelosi said the next phase of an economic rescue package should include additional measures to get more money directly to individuals — like the $1,200 direct payments for low- and middle-income taxpayers that were authorized in the $2 trillion bill that President Trump signed on Friday.

That could be achieved, she said, by having Congress “retroactively undo SALT,” a reference to a cap on the state and local tax deduction that Republicans included in their 2017 tax overhaul. That limit prevents households from deducting more than $10,000 a year in state and local tax expenses from their federal tax bills.

Henry Connelly, a spokesman for Ms. Pelosi, said on Monday evening that she was proposing something narrower than a full SALT rollback, and that any change would be “tailored to focus on middle-class earners and include limitations on the higher end.”

“We could reverse that for 2018 and 2019 so that people could refile their taxes” and receive more money back from the government, Ms. Pelosi said in the interview. “They’d have more disposable income, which is the lifeblood of our economy, a consumer economy that we are.”

In the 2018 midterm elections, Democrats wielded the SALT limits in House campaigns against Republicans in wealthy blue-state suburbs of cities like New York, Los Angeles and Chicago. Democrats voted last year to repeal the cap, but the effort died in the Republican-controlled Senate.

Republicans called the effort hypocritical, saying that it would primarily benefit wealthy households in high-tax states. Democrats had roundly denounced the 2017 law, which included rate cuts for businesses and individuals, as a handout to the rich. But the SALT deduction overwhelmingly benefits high earners.

The congressional Joint Committee on Taxation estimated last year that a full repeal of the SALT limit for 2019 alone would reduce federal revenues by about $77 billion. Americans earning $1 million a year or more would collectively reap $40 billion of those benefits. Most of the rest would go to households earning $200,000 or more.

That is a contrast with the bill Mr. Trump signed on Friday, which began to phase out direct payments for households earning $150,000 or more.

Ms. Pelosi’s proposal represents “the way to get money into the hands of people who don’t benefit from the $1,200 checks because they make too much money,” said Kyle Pomerleau, a resident fellow at the conservative American Enterprise Institute. “It certainly gets money into hands. But I’m not sure it’s the correct hands.”

Many liberal economic policy analysts also oppose lifting the SALT cap, calling it regressive tax policy. Seth Hanlon, a senior fellow at the liberal Center for American Progress, said the same logic was also a reason not to lift the limit in the next economic rescue bill. That is particularly true because consumption data show that low- and middle-income Americans are more likely than higher earners to spend benefits from the government immediately and stimulate economic activity.

The Tax Policy Center estimates that only 3 percent of households in the middle quintile of American taxpayers would receive any benefit at all from the SALT cap repeal.

“In and of itself,” Mr. Hanlon said, “it doesn’t strike me as the most effective way of targeting economic stimulus