PARIS — Jean-Marc Bellaiche took the helm of Printemps in the middle of a crisis. It was a challenging time for the French capital’s grand, historic department stores on Boulevard Haussmann even before the pandemic struck. Then international travel ground to a halt, keeping away the all-important visitor from abroad — a key growth driver — while lockdowns have made it impossible for local consumers to step in.

In the middle of this chaotic period, Bellaiche was named chief executive officer of Printemps, taking up a position that was left unfilled for six months following the sudden departure of his predecessor, Paolo de Cesare, after a 13-year run.

“We have a very strong brand and we can reinforce it,” Bellaiche said, noting the beauty of the Printemps name, which in French means “spring” but also evokes ideas of rebirth and new beginnings.

The executive plans a broad rejuvenation of the department store. The digital dimension will be an important part of the plans drawn up by the executive, who comes with extensive experience in the field. He also plans to revive spaces with exclusive products, and with a concept store approach, bringing gift sections to lower floors.

“When I arrived, I asked that during the holidays, we set up gift tables on the ground floor, not upstairs — normally they were located on the upper floors,” he said. Placing them on the upper floors was a strategy aimed at drawing clients further into the store — the Boulevard Haussmann flagship housed them five stories up, for example.

“The results were very good,” he said of the initiative. 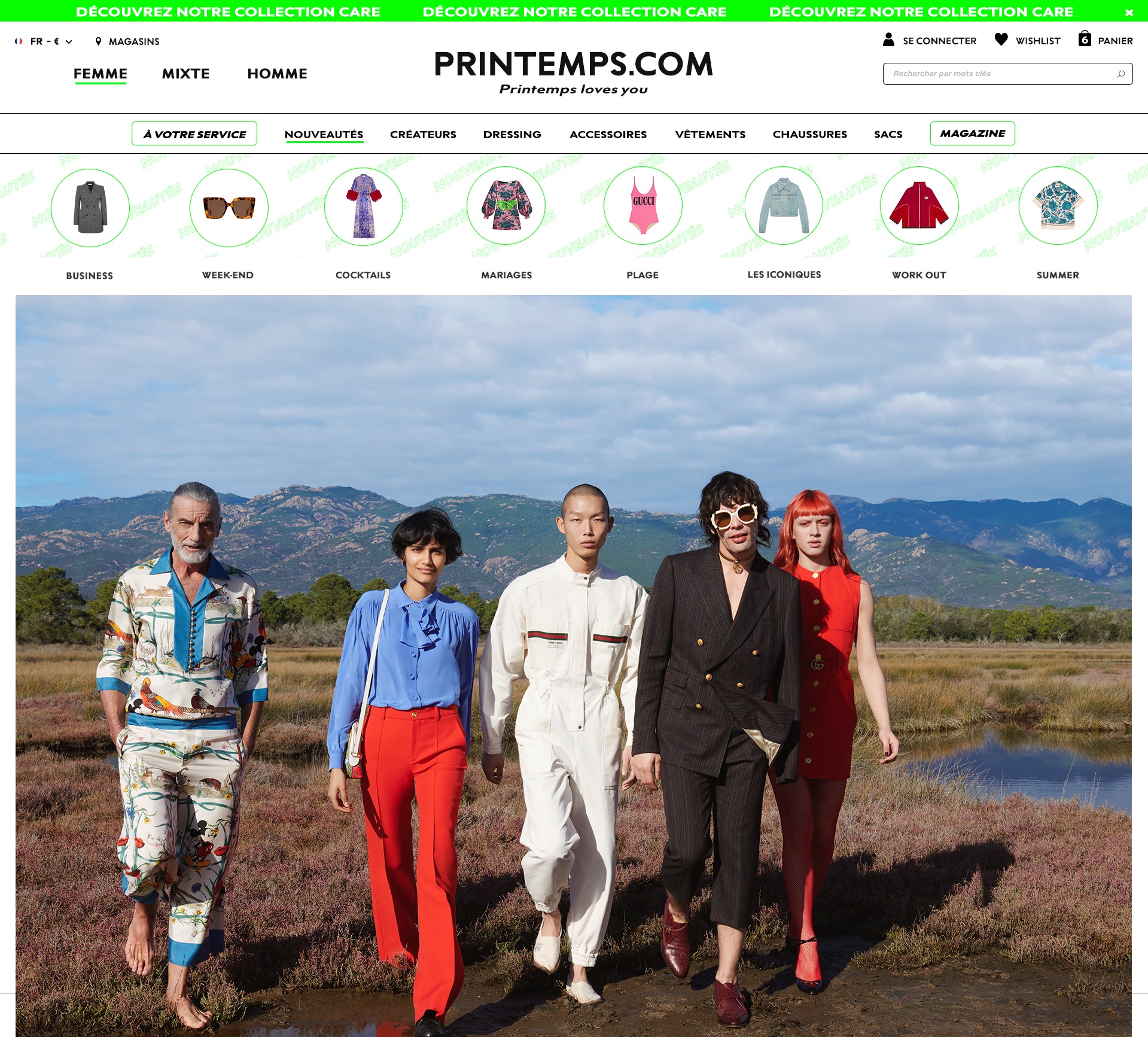 Homepage of printemps.com. Courtesy of Printemps

“A large number of clients purchased things from these gift tables, either because they were products that came in addition to a luxury purchase they’d already made, or because people wanted to make a purchase for themselves — especially after the lockdowns, there was a need to do something for oneself,” he said.

Offering gift sections around the store could even be seen as empathetic, offering an element of surprise to pandemic-weary consumers out for a pick-me-up, he suggested.

Which brings up the subject of products — a key focus for the CEO, who wants to expand the retailer’s range.

“The first thing is to develop new categories — that goes along the lines of the gifts, but in addition to the categories we are historically very strong in, like accessories, men’s and women’s fashion, beauty products, home goods, children’s section — I think there are other areas that we can expand in, like art, cultural items, technology, maybe objects linked to sports, everyday objects, interiors, including small items for interior decorating,” he said, ticking off the list.

The retailer bought Made in Design a couple of years ago, and has a strong sports-oriented store, under the banner Citadium — two assets he intends to lean on.

Bellaiche is also eager to seek leadership in the realm of exclusive brands.

“Printemps needs to work with fashion schools around the world, with little brands, to really return to being a kind of incubator and constantly offer surprises to our clients, with unknown brands — to return to this role as incubator and curator,” he said.

Having a strong representation of smaller labels also serves to improve the retailer’s standing with larger brands as well, in his view.

As for the area of sustainability, a long-term drive toward a circular economy is central to the department store’s strategy.

The retailer has been working on a project in the northern French city of Lille with a startup called Revive, which customizes unsold, Printemps-branded garments to give them a second life.

Printemps is also looking into how to offer something in the realm of secondhand products — clients are very interested in this.

“We have to put the client at the center,” he said.

The store’s environmental approach has to be part of a lasting process, he said, rather than just a sprinkling of efforts here and there.

“There is a real interest here on the part of clients,” Bellaiche said.

When it comes to the subject of omnichannel retail, Bellaiche has some ideas about leveraging the department store’s key asset: prime, physical space.

Bellaiche comes with a background in data, as chief strategy officer at Contentsquare, a French start-up that tracks consumer behavior online and helps e-commerce sellers adapt their offer accordingly.

“We can see a lot of pure players who, at a certain moment, realize they need to open a physical sales point — we have fantastic space, well-placed, and I think we can really leverage these sales floors as real assets to develop real complementarity between the digital realm and physical stores,” he said.

The retailer launched e-commerce a year ago, and has plans to expand on the platform.

“We have a fairly ambitious agenda that will begin with the progressive expansion of printemps.com— it was launched with a lot of success, but a limited offer,” he said. The project kicked off with strong branding — that was the objective — but now the idea is to expand the offer so it better reflects what’s in the stores.

“It’s very high-end, fashion-oriented and very selective — we plan to broaden the offer,” he said.

The executive is also planning the use of tablets in stores, so clients can order things that the retailer has run out of — the idea is to set up a system with the brands.

And, going the other direction, he would like to push in-store sales through online channels with personal shoppers.

E-commerce also offers an opportunity to expand abroad, without having to plant a physical flag, and there are plans to roll out printemps.com, which was launched in the U.K. in November, in the U.S., Asia and elsewhere in Europe.

“American department stores are quite strong online, but there’s room for Printemps, for access to brands and guidance from Paris — I believe we have something that differentiates us,” he said.

Made in Design is already present in other markets, with 35 percent of sales generated from abroad, principally in Europe, while Place des Tendances, a French fashion e-commerce site it acquired in 2013, has opened in a number of countries in Europe, growing abroad.

At the same time, deepening ties with clients is key to Bellaiche’s strategy.

“My obsession is the client,” he said. When he was growing up, his parents had a small apparel store. “I think I have this in my blood— but it’s also in the DNA of Printemps and that’s what’s also important,” he said, emphasizing the importance of reinforcing a traditional area of strength for the retailer, services.

Expanding the customer base is key, and plans are to expand the loyalty program, Printania, abroad, and launch a recruiting drive to gain new clients — younger ones, families, different nationalities.

Internally, the retailer has begun streamlining operations at its headquarters through a transformation plan, and is rebuilding teams with an eye to a more entrepreneurial approach and more women in leadership roles. Internally, Sophie Boquet, who formerly headed Citadium, has taken charge of the store network beyond the Haussmann flagship, while Karen Vernet, general director of offer, will take up relations with brands.

External recruits include Stéphane Roth, who is directing marketing efforts and comes with experience in Asia and the U.S., and with digital activities, and the head of transformation Maude Funaro, who has a digital transformation background and headed a lingerie label and has experience in management consulting.

Bellaiche is also aiming for more diversity in teams, as well as an entrepreneurial approach.

Investments will be focused on the digital front, and the company has said it plans to invest more than 40 million euros a year in this area over the next few years.

The previous CEO oversaw extensive renovations and an upscaling drive at the department store. Plans to open stores abroad have been put on hold, but Printemps intends to open a store in Qatar in 2022, to coincide with the FIFA World Soccer Cup, which will be held there.