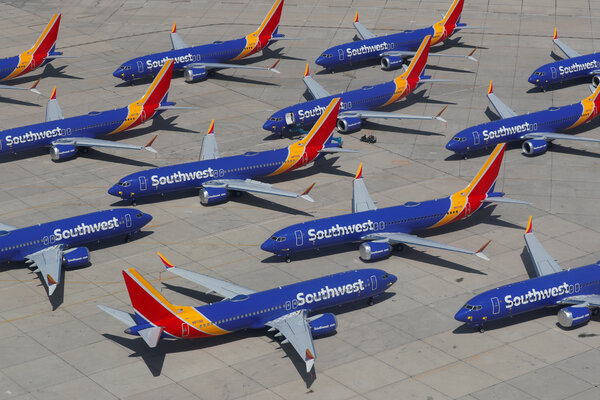 Hundreds of Southwest Airlines flights were delayed or canceled again on Wednesday as the company sought to resolve disruptions from earlier in the week.

As of midday Wednesday, about 8 percent of the airline’s flights had been canceled and another 14 percent had been delayed, according to FlightAware, a flight tracking service.

The headaches for Southwest, its staff and its customers began on Monday night, when a weather data supplier suffered performance issues preventing the airline from safely flying planes. The issue was resolved within hours. Then on Tuesday, the airline suffered its own technological problems for a few hours resulting in another round of delays and cancellations. Spillover from that episode caused Wednesday’s problems, the airline said.

“While our technology issues from Tuesday have been resolved, we are still experiencing a small number of cancellations and delays across our network as we continue working to resume normal operations,” Dan Landson, a Southwest spokesman, said in a statement.

The flight disruptions came at a critical time.

After seeing demand for travel plummet during the pandemic, Southwest and other airlines are experiencing a rebound as coronavirus cases in the United States fall and vaccinations increase. More people are flying for summer vacations and businesses and states and cities are opening up — the governors of California and New York said on Tuesday they had lifted most pandemic restrictions. The Transportation Security Administration screened more than two million people at airports on Sunday, more than at any point since March 2020.

Southwest was fortunate in that the delays and cancellations occurred during a part of the week that is typically less busy.

One passenger, Efia Brown, and her daughter were trying to return to their home in St. Louis from Los Angeles on Monday when Southwest Airlines canceled a connecting flight while they were waiting at the airport in Denver. Ms. Brown’s daughter became sick on their earlier flight and, after the airline notified them of the cancellation, Ms. Brown booked another for 9:30 p.m. on Tuesday. But her daughter had to be admitted to the hospital on Tuesday after vomiting several times in the airport gate and the family is still in Denver.

“It’s very disappointing because this is the only airline I fly with,” Ms. Brown said. “When this happened, it was so frustrating, I had to hold back my tears.”

The disruptions have been difficult for Southwest’s staff, too, said Lyn Montgomery, president of Transport Workers Union Local 556, which represents Southwest’s flight attendants. The airline’s management has been providing regular updates to flight attendants and worked to provide accommodations for those who were stranded, she said, adding that such outages happen.

“We are all victims to computers and computer issues,” she said, “and when it happens at an airline, it tends to be massive.”