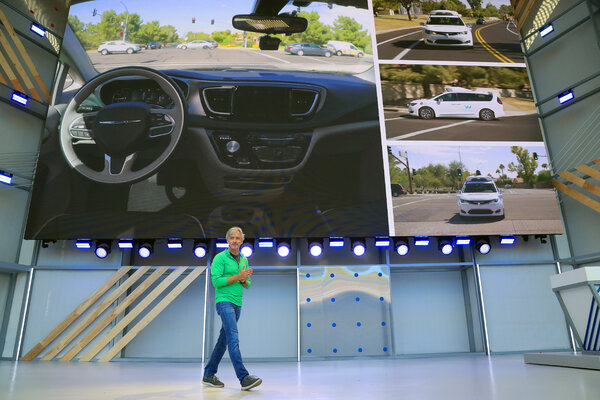 Waymo, the autonomous car unit of Google’s parent company, Alphabet, said John Krafcik is stepping down as chief executive after five and a half years at the helm.

In a statement, Waymo said the chief executive duties will be divided between two current company executives — Tekedra Mawakana and Dmitri Dolgov. Ms. Mawakana was Waymo’s chief operating officer, and Mr. Dolgov was the company’s chief technology officer before the promotion.

In a blog post announcing the move, Mr. Krafcik, 59, did not specify a reason for why he was stepping down at this moment other than to say he was pursuing “new adventures.” Waymo said it was Mr. Krafcik’s decision and that he plans to remain an adviser to the company.

Mr. Krafcik, a longtime auto industry executive who oversaw Hyundai Motor’s U.S. operations, joined Waymo in 2015 when it was still part of Google. During his tenure, Google spun out Waymo into a separate subsidiary of Alphabet, and the company raised more than $3 billion from outside investors in a move that signaled a greater independence from its parent company.

Google and Waymo have pursued self-driving car technology for more than a decade. Waymo has launched its own autonomous taxi service in the greater Phoenix area called Waymo One, and the company has struck partnerships with a handful of car manufacturers, including Volvo and Jaguar Land Rover, to build its self-driving technology into their vehicles.

Ms. Mawakana joined Waymo four years ago as the global head of policy and has been the company’s operating chief for the last two years. Before that she worked in policy positions at eBay, Yahoo and AOL.

Mr. Dolgov is one of the original employees who started Google’s self-driving car project in 2009 and is considered one of the leading technical experts in autonomous vehicle technology.