🚨 The DealBook Online Summit starts on Tuesday, Nov. 17. Register now to watch for free from anywhere. The newsmakers in the lineup for the first day of the two-day summit are sure to make headlines:

Masayoshi Son of SoftBank on the 300-year outlook for innovation (9 a.m. Eastern)

Dr. Anthony Fauci on the latest developments in the pandemic (11 a.m.)

A panel with Albert Bourla of Pfizer, Bill Gates and Heidi Larson of the Vaccine Confidence Project on the prospects of Covid-19 cures (1 p.m.)

Senator Elizabeth Warren on what’s next for Washington (4:30 p.m.) 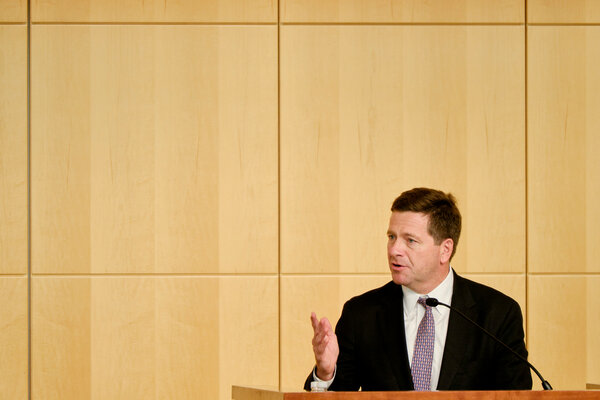 Exclusive: Jay Clayton is stepping down from the S.E.C.

Jay Clayton, the former corporate deal lawyer who has led the Securities and Exchange Commission since 2017, is stepping down as chairman at the end of the year. (His term would have expired in June.) Here’s a rundown of his tenure:

Individual investors were his focus. In his first speech as chairman, Mr. Clayton emphasized protecting “the long-term interests of the Main Street investor.” That approach was reflected in moves like stopping the car-rental company Hertz selling stock while in bankruptcy protection, and cracking down on cryptocurrency frauds. He also expressed skepticism about disclosure rules for SPACs, the blank-check investment funds hot on Wall Street, echoing concerns that they may hurt ordinary investors at the expense of the savvy deal makers running them.

But he didn’t rock the boat that much. Early on, Mr. Clayton said he saw no need for “wholesale changes to the commission’s fundamental regulatory approach.” Indeed, as at other agencies, some of the big initiatives at his S.E.C. rolled back regulations:

It loosened rules governing the independence of corporate auditors.

It adopted a conduct standard for brokers that consumer advocates argued weakened protections.

Despite criticism he wasn’t tough enough, enforcement increased on his watch. The S.E.C. pursued 3,152 enforcement cases during Mr. Clayton’s tenure, slightly more than brought by Mary Jo White from 2013 to 2017. The Clayton era also saw $16.8 billion in financial remedies, again slightly more than under Ms. White.

High-profile targets included Elon Musk and Elizabeth Holmes. The S.E.C.’s biggest battle was when it sued Tesla in 2018 over Mr. Musk’s tweets about taking the carmaker private. Mr. Musk had to step down as chairman and pay a $20 million fine. That same year, the commission accused Ms. Holmes of lying about Theranos’s blood-testing capabilities, extracting a $500,000 settlement and barring her from serving as an executive or director of a public company. (She didn’t have to admit or deny guilt.)

Mr. Clayton’s biggest controversy was about his effort to score a top federal prosecutor post. Earlier this year, he told Attorney General Bill Barr that he was interested in becoming the U.S. attorney for the Southern District of New York, despite having never been a litigator. After Geoffrey Berman was fired from the post, a political firestorm forced Mr. Clayton to back off.

He doesn’t plan to rejoin corporate America right away, we hear, and it’s unclear what he will pursue next.

What’s next for the S.E.C.? Like other financial regulators, the commission is likely to get tougher under President-elect Joe Biden: Names being floated to replace Mr. Clayton reportedly include Gary Gensler, an Obama-era financial regulator, and Preet Bharara, who led the Southern District under Mr. Obama.

Moderna says its Covid-19 vaccine is 94.5 percent effective. The drugmaker’s announcement this morning — based, like Pfizer’s last week, on early clinical trial data — vastly exceeds health officials’ expectations. (Still to be figured out: how states and cities will distribute these finicky vaccines.) The news comes as the U.S. hit 11 million Covid-19 cases.

PNC announces an $11.6 billion banking acquisition. The Pittsburgh-based lender agreed today to buy BBVA’s business in the U.S., in one of the biggest bank takeovers since 2008. It would make PNC, which has sought to grow through deal-making, the country’s fifth-biggest retail lender.

Beijing strikes a big regional trade deal. China and 14 other countries signed the Regional Comprehensive Economic Partnership, covering 2.2 billion people. The deal’s scope is limited, but its symbolism isn’t: This “could help further cement China’s image as the dominant economic power in its neighborhood,” The Times’s Keith Bradsher and Ana Swanson write.

Japan’s economy surges — for now. The country’s G.D.P. jumped by 5 percent in the third quarter, after three quarters of contraction. Japan has had relative success containing the coronavirus, with 1,800 deaths since the pandemic began, but its trading partners’ struggles could still hamper recovery.

Nissan reportedly considers a divorce. The carmaker is looking at ways to sell some or all of its 34 percent stake in Mitsubishi, Bloomberg reported. It would be the first rupture in the ambitious three-way partnership, also including Renault, that was forged by its former chief Carlos Ghosn.

As President-elect Joe Biden prepares to take office, many are wondering how he will alter America’s approach to China. Hank Paulson, the former Treasury secretary widely seen as one of Wall Street’s envoys to Beijing, has some ideas.

Mr. Paulson advocates “targeted reciprocity,” he will say in a speech at the Bloomberg New Economy Forum today that we’re the first to report. That involves backing away from President Trump’s tit-for-tat economic warfare, and reserving retaliation for strategic areas while maintaining ties in others. “We must reject the increasingly popular idea that merely having an economic relationship with China is somehow bad,” he will say.

China’s “closed, statist model” won’t stand the test of time, he will say. By contrast, the relative openness of the American economic model is its “greatest competitive strength,” and the U.S. shouldn’t take any cues on this from China. (“We must prove our economic model is better than authoritarian state capitalism.”) That means neither relying too heavily on China, nor cutting off American companies’ access to Chinese markets. And it also involves dangling the prospect of lifting tariffs on Chinese goods in exchange for concessions from Beijing.

“Competition without unnecessary confrontation should be our goal,” he will say, “because confrontation without effective competition has produced some poor results.” Putting pressure on China will require working with others like Japan, the E.U. and the World Trade Organization — an approach that the Trump administration scorned. “If Beijing refuses to join this new multilateral effort,” Mr. Paulson will say, then the coordination would strengthen his “punitive tool kit built on targeted reciprocity”; allies could close market access to China jointly.

Photo of the day

SpaceX launched four astronauts to the International Space Station yesterday, the first official “operational” spaceflight by a commercial operator for NASA. (The one in May was a test.) Also aboard: a “Baby Yoda” doll.

Dina Powell McCormick, who has risen through the ranks of both Goldman Sachs and two Republican administrations, is adding a new role to her portfolio: head of Goldman’s burgeoning sustainability programs. DealBook has the scoop on the job.

Ms. McCormick will become the global head of sustainability and inclusive growth, Goldman’s C.E.O., David Solomon, wrote in a memo today. She will also expand her work with foreign governments, becoming the global head of the bank’s sovereign business. She’ll report to Mr. Solomon, who has made environmental issues a focus.

It’s another highly visible role for Ms. McCormick, who joined Goldman in 2007 to lead impact investing and the firm’s 10,000 Women and 10,000 Small Businesses programs. She had previously served in the George W. Bush administration. After 10 years at Goldman, she left in 2017 to join the Trump administration, becoming an influential foreign policy adviser, before rejoining the bank in 2018.

The appointment makes her one of Goldman’s most prominent female executives. She’s already on its vaunted management committee, a high-profile emissary to the worlds of politics, foreign affairs and philanthropy. And it’s notable that she got there outside the firm’s usual paths to prominence, via banking or trading.

Airbnb is expected to file its I.P.O. prospectus later today, joining a wave of tech businesses looking to go public this year. It’s expected to seek to raise about $3 billion, and will list its shares on the Nasdaq.

Facebook’s Mark Zuckerberg and Twitter’s Jack Dorsey are back (virtually) at a Senate hearing on Tuesday, answering questions from the Judiciary Committee about how their platforms slowed the spread of a New York Post story about Hunter Biden. They last testified three weeks ago, and since then a member of the committee, Kamala Harris, has become the vice president-elect.

Pandemic shopping habits will be a theme of company earnings. Home Depot and Walmart on Tuesday, and Lowe’s and Target on Wednesday, are expected to report rising sales as consumers stock up on essentials and embark on lockdown home improvements. Hopes are dimmer for Macy’s on Thursday, as shoppers shy away from malls.

The Italian payments company Nexi agreed to buy a rival, Nets, for $9.2 billion, only a month after agreeing to buy another competitor for $5.5 billion. (Bloomberg)

Simon Property Group cut the price of its purchase of a controlling stake in Taubman Centers by 18 percent, to $2.65 billion. (Reuters)

Vodafone reportedly plans to spin off its European cellphone towers into a publicly traded company, with a fund-raising target of nearly $5 billion. (Bloomberg)

Two law firms withdrew as counsel to the Trump campaign’s efforts to challenge election results in Arizona and Pennsylvania. (NYT)

DoorDash’s I.P.O. prospectus showed a temporary business bump from the pandemic, but raised questions about its prospects of long-term profit. (NYT)

The conservative megadonor Rebekah Mercer is one of the biggest investors in Parler, the conservative-focused social network. (WSJ)

The tailors of London’s Savile Row have a bespoke strategy to survive the pandemic. (NYT)

“I❤️NY in Crisis: How Do Tourist Shops Survive With No Tourists?” (NYT)

Related posts:
Recent Posts
Latest Posts
Edward P. Lazear, Economist and Presidential Adviser, Dies at 72
Kylie Moore-Gilbert: Iran releases British-Australian academic ‘in exchange for three Iranians’
Denver officers, Adams County sheriff deputies justified in shooting and killing man who held woman hostage in Denver backyard, DA says
Opinion | Reports of Hong Kong’s Death Are Greatly Exaggerated
Mum and two children missing – and one ‘needs urgent medical attention’
This website uses cookies to improve your user experience and to provide you with advertisements that are relevant to your interests. By continuing to browse the site you are agreeing to our use of cookies.Ok