“I’m concerned about a plateau,” one economist said, pointing to a slower phase of the recovery after a hiring bounce in the spring. 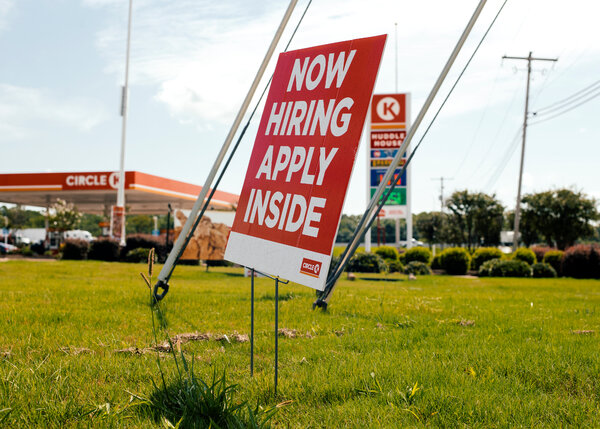 The number of Americans filing for unemployment benefits fell last week, but employers continue to lay off workers at an extraordinarily high pace that exceeds the worst levels of past recessions.

Initial claims for state benefits totaled 790,000 before adjustments for seasonal factors, the Labor Department reported Thursday. The tally, down from 866,000 the previous week, is roughly four times what it was before the coronavirus pandemic shut down many businesses in March.

The latest data suggests that jobless claims have flattened since the big gains in hiring recorded last spring as the economy bounced back, economists said. And layoffs continue — on Wednesday, for example, Raytheon said it would eliminate 15,000 commercial aerospace and corporate jobs.

“I’m concerned about a plateau,” said Gregory Daco, chief U.S. economist at Oxford Economics. “It suggests we are entering the second phase of the recovery, one that is slower and more susceptible to downside risk.”

Other economic data has been mixed. The Commerce Department reported Wednesday that retail sales rose 0.6 percent in August, compared with a 0.9 percent gain in July, as consumers grew more cautious.

And in a sign of how guarded the long-term economic view remains, the Federal Reserve indicated that it would keep interest rates near zero at least through 2023.

“The labor market continues to heal from the viral recession, but unemployment remains extremely elevated and will remain a problem for at least a couple of years,” said Gus Faucher, chief economist at PNC Financial Services.

Related posts:
Recent Posts
Latest Posts
You CAN have mates back for drink after pubs close at 10pm – but there are rules
‘Goliath’ 85 tonne giant air bridge to be erected over Hobson St tomorrow
Presidential debate: What time is it, and what to watch for tonight
Brexit Britain makes history as staggering £15billion Japan trade deal secured
U.S. stocks advance, benchmark Treasury yields rise on fiscal aid hopes
This website uses cookies to improve your user experience and to provide you with advertisements that are relevant to your interests. By continuing to browse the site you are agreeing to our use of cookies.Ok