UPS will allow workers to have facial hair and natural Black hairstyles like Afros and braids as it becomes the latest company to shed policies widely criticized as discriminatory amid nationwide demands for racial justice.

The delivery company, which has more than 525,000 employees worldwide, said it was also eliminating gender-specific rules as part of a broader overhaul of its extensive appearance guidelines, which cover hair, piercings, tattoos and uniform length.

UPS said that Carol Tomé, who in March was named the first female chief executive in the company’s 113-year-history, had “listened to feedback from employees and heard that changes in this area would make them more likely to recommend UPS as an employer.”

“These changes reflect our values and desire to have all UPS employees feel comfortable, genuine and authentic while providing service to our customers and interacting with the general public,” the company said in a statement.

The policy change, previously reported by The Wall Street Journal, comes amid a growing national movement to ban racial discrimination against people based on their natural hairstyle. Many companies, responding to months of protests against systemic racism, have also sought to address discrimination by overhauling brand names and marketing images and by diversifying their ranks.

California last year became the first state to ban discrimination based on hairstyle and hair texture by passing the Crown Act — an acronym for Create a Respectful and Open Workplace for Natural Hair. New York and New Jersey soon followed with their own versions of the law, and a federal version passed the U.S. House in September.

In February, the Oscars highlighted the issue when it named “Hair Love,” a film about an African-American father learning to style his daughter’s natural hair in his wife’s absence, best animated short. 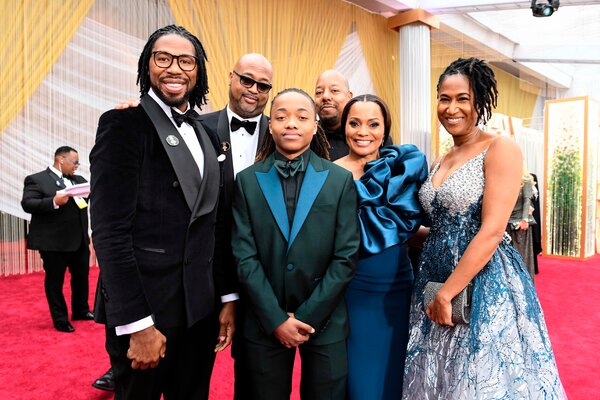 The actress Gabrielle Union and the former N.B.A. star Dwyane Wade, the married producers of “Hair Love,” invited to the ceremony a Black high school student in Texas who had been suspended because of the way he wore his dreadlocks.

The student, DeAndre Arnold, was one of a number of Black people who said they had been singled out in the workplace or in school because of their hair.

In 2018, an 11-year-old Black student at a Roman Catholic school near New Orleans was asked to leave class because administrators said her braided hair extensions violated school rules, according to a lawyer for her family.

In 2017, Black students at a charter school in Massachusetts complained that they had been subjected to detentions and suspensions because they wore hair extensions, prompting the state’s attorney general to order the school to stop punishing students for wearing hairstyles that violated the school’s dress code.

In 2018, UPS agreed to pay $4.9 million to settle a lawsuit filed by the U.S. Equal Employment Opportunity Commission, which said the company had failed to hire or promote Muslims, Sikhs, Rastafarians and others whose religious practices conflicted with its appearance policy.

The commission said the company had for years segregated workers who wore beards or long hair in accordance with their religious beliefs into nonsupervisory, back-of-the-facility positions without customer contact.

The company’s new policy clarifies that beards and mustaches “are definitely acceptable as long as they are worn in a businesslike manner and don’t create a safety concern,” according to UPS documents reviewed by The Journal. The new rules took effect immediately.

The policy also permits natural hairstyles “such as Afros, braids, curls, coils, locs, twists and knots,” according to The Journal. And it eliminates guidelines specific to men and women. “No matter how you identify — dress appropriately for your workday,” the policy states.

The Teamsters, which represents UPS workers, said it was “very pleased” with the changes.

“The union contested the previous guidelines as too strict numerous times over the years through the grievance/arbitration process and contract negotiations,” the union said in a statement. “We have proposed neatly trimmed beards during several previous national negotiations.”

Angela Onwuachi-Willig, a professor of law and dean of the Boston University School of Law, who has researched hair codes, said the change at UPS “recognizes that allowing people to be their authentic selves is good for business.”

Policies that ban natural Black hairstyles are clearly discriminatory, she said, because they deem Black hair to be “inherently unprofessional.”

“I’d like to see these sorts of policy changes accompanied by a deeper reckoning with the past, and with a humility that unfortunately doesn’t come often in our litigious society,” he said. “Companies like UPS need to acknowledge that these sorts of policies have had long-term effects, and will continue to have ramifications or racial outcomes unless more is done.”

Related posts:
Recent Posts
Latest Posts
Covid 19 coronavirus: After admitting mistake, AstraZeneca faces difficult questions about its vaccine
Supreme Court blocks New York’s virus-imposed limits to religious services.
Teacher sparks row after saying ‘periods aren’t a good reason to skip school’
Government to let in 2000 fruit pickers from Pacific – but with living wage catch
Met Office weather warnings: Freezing fog shrouds England in yellow alert – latest maps
This website uses cookies to improve your user experience and to provide you with advertisements that are relevant to your interests. By continuing to browse the site you are agreeing to our use of cookies.Ok