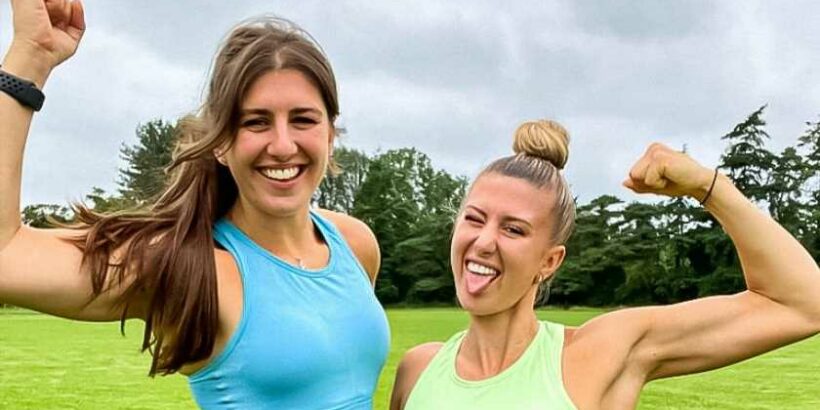 Talia and Guilia Harte have had more than their fair share of health complications. Yet, they’ve never stopped loving sport, exercise and pushing the limits of their bodies.

To look at the Harte sisters’ Instagram page, you’d assume that they were beacons of health. They share videos of them lifting heavy weights in the gym, doing HIIT workouts outside, working with supplement companies and, atenolol with alcohol heck, even pulling cars.

But their fitness journeys are a little more complicated than you might think at first glance. Both Talia and Giulia suffer from coeliac disease, and Talia has also been diagnosed with insulin resistance, polycystic ovary syndrome (PCOS) and nonalcoholic fatty liver disease (NASH). Yet, they’re ex-Team GB skiers who have spent their life dedicated to sport and exercise.

“We’d skied with our parents from the age of around one and a half, going down in reins between our dad’s legs,” says Guilia. “When the primary school we went to found out that we skied they signed us up for the school ski team and we started going to the dry slopes, then doing races, and that’s how it all began.”

Eventually, they were skiing for Britain. But the height of their skiing success, when they were trying to qualify for the 2014 Winter Olympics, coincided with the most serious onset of their coeliac disease.

Sea swimming: “How cold water swimming has helped me to manage my auto-immune flare-ups”

“I was diagnosed in 2015, but that was after two years of a lot of struggle,” says Talia. “And we both struggled in different ways. Coeliac disease is a disease that means your immune system attacks the lining of your stomach but my symptoms were mainly hormonal, which was worse because it wasn’t just about powering through the pain. There were a lot of races where I would just be about to release and I wouldn’t be able to concentrate, I had no coordination, my eyes could get really blurry and I couldn’t move my fingers.”

For Guilia, the symptoms presented themselves as breathing struggles. “When I was training, it felt like I was having an asthma attack. Doctors put me on every single asthma pump there was, including steroids, and nothing ever helped.”

Exercising with PCOS and celiac disease: Talia was skiing at the height of her health complications.

In a bid to find the cause of her struggle, Guilia ended up having a lot of invasive investigations. They included putting a camera up her nose and into her lungs to monitor her while on a treadmill, and surgeries to remove some of her voice box and nodes on the back of her throat that appeared to be closing over as a result of her coeliac disease. “Eventually, we tried a food elimination diet and things seemed to get better when we removed wheat, so we got tested for coeliac,” she explains.

While Guilia’s symptoms improved with the close monitoring of her diet, Talia was still struggling with physical symptoms. “I remember being at the top of the race, in the start area and dad, who was our coach at the time, took one look at Talia and said, ‘You’re not doing this,’ and pulled her from the race,” says Guilia.

Exercising with chronic illness: “How an autoimmune condition made me appreciate my workouts”

“I’d eaten everything right for my gluten-free diet but I was having quite a severe hypoglycemic reaction [as a result of NASH]. He carried me off the mountain because I just couldn’t see and my legs wouldn’t work. Guilia had to carry all of my stuff down while he carried me,” she says.

Then there were the periods. After suffering from excruciating pain, Talia was diagnosed with PCOS. “The week before and the whole week of my period I can’t do anything high impact. I can’t run, I can’t jump. Sometimes the pain will be what you’d expect from a normal period, other times I’ll be in a ‘period coma’,” she says.

All of this leads to the question: how and why do they continue to love exercise and sport when their bodies have been through so much?

“It’s been a struggle but never to the point where we felt like we couldn’t do it. That’s purely because we’ve done it together,” says Guilia. While their high-performance, hyper-focused athlete mindset means that they often don’t notice when they’re unable to perform, it’s been crucial to have each other and their dad around to check food labels and monitor blood glucose levels.

“When you’re focusing on your training and the race, you’re often too blinded to think about what your body is telling you. I think the most important thing for people training with these conditions is having someone who can check you’re functioning normally – that doesn’t have to be a coach, but just anyone to keep an eye on you,” adds Talia.

The Harte sisters have supported each other through their health scares.

They’ve had to learn to take their eyes off the prize and tune into their bodies, though. “In an athlete setting, you have to know what is wrong with you straight away. You can’t spend days or weeks trying to figure out which part of the body you’ve injured – you have to know there and then so that the physios can fix it in time for the next event,” explains Talia. “I guess the health conditions have helped me realise when I’m not reacting well – I can’t just say I don’t know what I’ve eaten or I don’t understand why I’m in pain. You just have to understand yourself more.”

Practically, they survive on a very carefully planned diet of gluten-free foods and, for Talia, medication. When they were competing, they drove rather than flew to the mountain ranges so that they could load the car with free-from items that aren’t accessible in often bread-based mountainside restaurants.

They take a day-by-day approach to training, too: “When we’re just dryland training, so like gym and running, I don’t cry over not being able to make a session – particularly because I don’t enjoy running,” says Talia. “But when we’re skiing, we tend to just get on with it. I know I often won’t train to the best of my ability, but I will try very hard. It’s probably best that the people around me don’t say anything like, ‘that was not a great ride’ because I’ll probably just cry.”

This isn’t a cliche story of how physical hardship made them appreciate their bodies more. “I wouldn’t wish this upon anyone. It’s not exactly the nicest lifestyle,” says Guilia. And yet they’ve adapted – and succeeded.