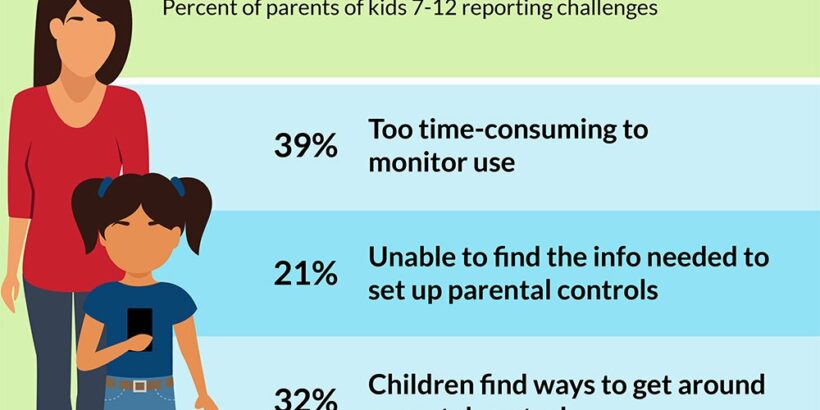 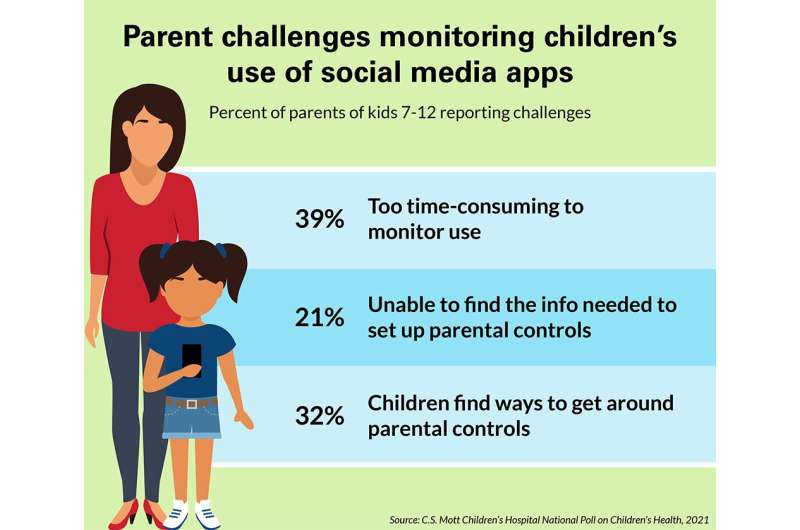 Teens making Tik Tok dance videos, communicating through Snapchat and growing their own Instagram accounts has become common in the modern digital era.

But social platforms are also becoming familiar to younger kids, with parents in a new national poll reporting that half of children aged 10-12 years and a third of children ages 7-9 use their devices to engage with others on social media apps.

And while most parents track their kids’ use of social media, one in six aren’t using any parental controls for their child’s social apps, according to the University of Michigan Health C.S. Mott Children’s Hospital National Poll on Children’s Health.

“There continues to be debate over how soon is too soon when it comes to using social apps and how parents should oversee it,” said Sarah Clark, M.P.H., Mott Poll co-director.

“Our poll looks at how often tweens and younger children use social platforms and how closely parents are monitoring these interactions.”

The nationally representative report is based on responses from 1, increasing lipitor dose 030 parents with at least one child aged 7-12.

Keeping up with kids on social apps

Parents cited several challenges in watching over their kids’ social media use with one in five saying they couldn’t find the information they needed to set up parental controls. Another two in five said it was too time-consuming to monitor social media, while a little more than a third believed parent controls are a waste of time because children would find a loophole around parental controls.

Clark said parents should be helping kids navigate the social media world to help them understand the harms of oversharing and interacting with strangers.

“If parents are allowing younger children to engage in social media, they should take responsibility for making the child’s online environment as safe as possible,” Clark said. “If parents can’t commit to taking an active role in their child’s social media use, they should have their child wait to use these apps.”

In deciding which apps are appropriate and safe for their child, nearly three in four parents polled said they consider if the app has parental controls while more than three in five looked at an app’s age rating or if it’s needed for school.

But many parents expressed concerns about social apps, especially when it came to their child’s privacy, exposure to inappropriate content and vulnerability to adult predators.

Two-thirds of parents expressed concerns about their child sharing private information through apps. The Children’s Online Privacy Protection Act (COPPA) addresses this issue by requiring the operators of apps and other online services to provide parental control over release of private information.

However, only 56% of parents reported using privacy settings that limit the collection of data through children’s apps.

Half of parents polled also thought their child would be unable to spot an adult user, yet just three in five require their child to get parent approval for new contacts on social media apps.

“It may be difficult to recognize an adult masquerading as a kid on social media so parents need to take a gatekeeping role for younger kids,” Clark said.

Clark recommends parents research apps they’re considering allowing their child to use, including versions that cater to kids. This may include modified versions of apps popular with teens, such as Facebook’s Messenger Kids or TikTok’s “younger user” section. Other apps, designed specifically for pre-teens, try to limit the online risks by restricting certain activities (e.g., posting photos or using private chats) and offering dashboards or reports for parents to monitor their child’s use of the app.

“Parents should look into whether the content is curated to allow only youth-friendly programming or whether there is a moderator that weeds out inappropriate content,” Clark said.

“They should also utilize parental blocks or passcodes for certain sites or content.”

A third of parents also aren’t confident that their child could recognize what information is true versus false on social media apps. Clark recommends parents talk to their kids about identifying credible sources. They may encourage children to rely on sites or information sources recommended by the school or educational apps for example.

Helping children recognize altered images and videos may be more challenging. Parents should have ongoing conversations with young children about what they read and see on social apps and help them recognize disinformation and altered images, Clark said since such content may lead to distorted perceptions of body image or encourage dangerous actions.

Schools may also be a key partner in promoting safe use of social media apps for children by identifying educational apps and sites with appropriate content for grade-level assignments, Clark noted. Some schools offer training on protecting personal information, recognizing fake images or information, and how to report inappropriate behavior on social media for example.

“Parents should be guiding children toward safe use of social media apps through both parental controls and having regular conversations with their kids to teach them online safety rules,” Clark said.