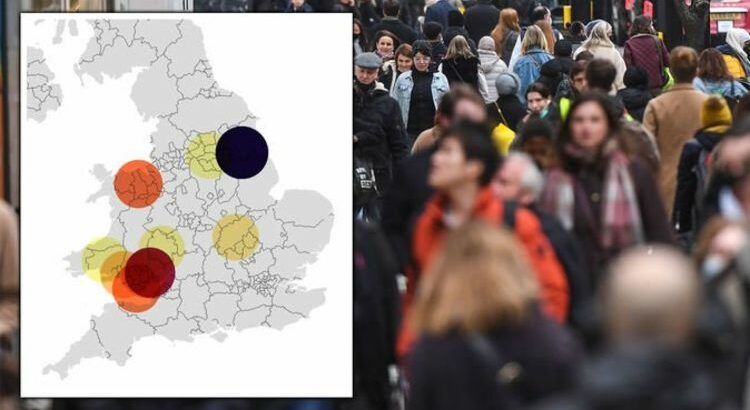 Most Brits have received two Covid vaccine doses, with more than 45 million now fully equipped. While this has afforded them the best available immunity, the disease has not gone away and still infects thousands of people a day. Cases are scattered disproportionately around the country, with most settling into several danger areas.

These numbers show a national downward trend in cases, 1890 pharmacy’s with 4,832 fewer compared to last week.

The two percent reduction is bittersweet when taking local case rates per 100,000 into account, as it unveils 10 areas with sky-high infection totals.

The Gov.uk data shows the top 10 most infected areas include:

These rates include the total number of people who have received either lateral flow or lab-reported positive results.

Although the national case rate is slowly dropping, the months ahead could see them rise across more than just these 10 areas.

Experts have warned the UK is especially vulnerable to a coming winter wave.

Neil Ferguson, an Imperial College London professor and member of the Scientific Advisory Group for Emergencies (SAGE), said Britain is not among countries that can “afford” a winter surge.

It gives them room to manoeuvre and would allow them to avoid “unduly stressing” their national health systems.

He made the comments during a Parliamentary session on coronavirus, adding the UK is closer to what it can handle.

He said the NHS is “much closer to the limit”, and the current mitigation strategy is behind this.

The Government’s “live with Covid” strategy is behind current transmission rates, he added.

Continued reliance on this strategy would require ministers to keep a surgical eye on the data.

He conceded that seeing rates surge isn’t a certainty just yet.

If health officials continued to roll boosters out “quickly”, it could keep the UK on “flat incidence.”

But the NHS “can’t afford” to test these waters at present, Dr Ferguson concluded.