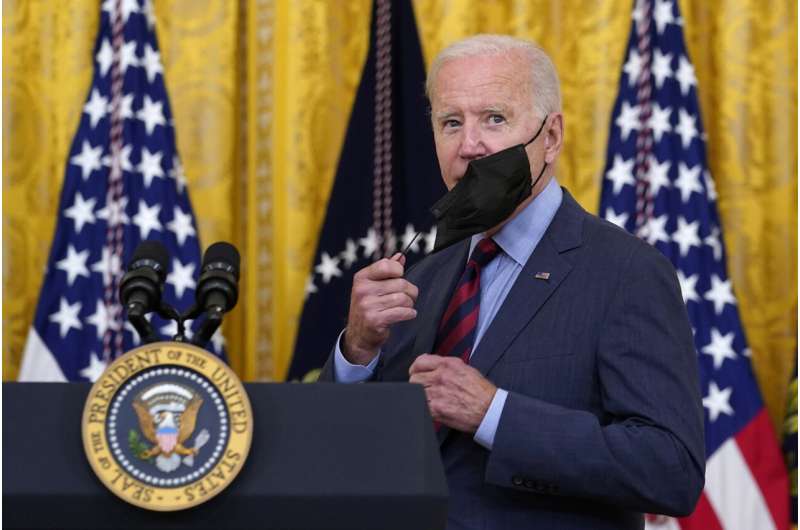 President Joe Biden’s administration drew up a strategy to contain one coronavirus strain, then another showed up that’s much more contagious.

This week—a month late—Biden met his goal of 70% of U.S. adults having received at least one COVID-19 shot. Originally conceived as an affirmation of American resiliency to coincide with Independence Day, the belated milestone offered little to celebrate. Driven by the delta variant, new cases are averaging more than 70, acetazolamide how does it work for altitude sickness 000 a day, above the peak last summer when no vaccines were available. And the Centers for Disease Control and Prevention is drawing criticism from experts in the medical and scientific community for its off-and-on masking recommendations.

But the delta variant makes no distinctions when it comes to politics. If Biden’s pandemic response is found wanting, Republican governors opposed to pandemic mandates also face an accounting. They, too, were counting on a backdrop of declining cases. Instead unvaccinated patients are crowding their hospitals.

The Biden administration’s process-driven approach succeeded in delivering more than enough vaccine to protect the country, sufficient to ship 110 million doses overseas. When the president first set his 70% vaccination target on May 4, the U.S. was dispensing around 965,000 first doses per day, a rate more than twice as fast as needed to reach the July 4 goal.

Then things started to happen.

While the White House was aware of public surveys showing swaths of the population unwilling or unmotivated to get a shot, officials didn’t anticipate that nearly 90 million Americans would continue to spurn lifesaving vaccines that offer a pathway back to normalcy. The spread of misinformation about the vaccines enabled a festering fog of doubt that has clung close to the ground in many communities, particularly in Republican-led states.

Yet on May 13, when the CDC largely lifted its mask-wearing guidance for fully vaccinated adults indoors, topline indicators were still flashing green. The agency said unvaccinated people should keep wearing masks—and get their shots soon. Biden and Vice President Kamala Harris celebrated by doffing their masks and strolling in the Rose Garden of the White House. Around the country, an everyday celebration spread to coffee shops, supermarkets, beer gardens and restaurants. People planned weddings and music festivals.

Drowned out in the applause were expert warnings that there was no way to tell who was and who wasn’t vaccinated, and a country restless for an end to the pandemic was essentially being placed on the honor system.

“The single biggest mistake of the Biden presidency when it comes to COVID 19 was the CDC’s precipitous and chaotic change in masking guidance back in May,” said Dr. Leana Wen, a former Baltimore health commissioner and commentator. “It had the direct result of giving people the impression the pandemic was over. It allowed unvaccinated people to have free rein and behave as if they were vaccinated, and therefore we have the surge of the delta variant.”

“I think they were naive,” Dr. Paul Offit, director of the Vaccine Education Center at Children’s Hospital of Philadelphia, said of the CDC. “They saw it as a carrot, as a gift.”

Meanwhile, the delta variant had arrived, and in a matter of weeks would become the dominant strain in circulation.

CDC Director Dr. Rochelle Walensky recently confirmed just how much more contagious delta is. “If you get sick with the alpha variant, you could infect about two other unvaccinated people,” she said. “If you get sick with the delta variant, we estimate that you could infect about five other unvaccinated people—more than twice as many as the original strain.”

Last week, the CDC reversed course on masks, recommending that even vaccinated people again mask up indoors in areas where the virus is on the march, now most of the country.

The immediate reason was a report by disease detectives of a recent outbreak in Provincetown, Massachusetts. The delta variant was to blame and a majority of those infected had been vaccinated. Although very few vaccinated people got sick enough to be hospitalized, the initial findings showed vaccinated people with breakthrough infections were carrying about as much virus as unvaccinated people.

The report fed vaccine doubts in some quarters. Wen, the former health commissioner, said the CDC should have put the Provincetown report in a fuller context that showed vaccines do keep protecting. CDC did not immediately respond to requests for comment.

Back on July 4 Biden proclaimed that the nation was declaring its independence from the virus. In recent weeks, he seemed to have moved on from the pandemic. The president was focused on securing a bipartisan deal on infrastructure and on selling the separate Democrats-only legislation to carry out his ambitious domestic agenda. The number of White House COVID-19 briefings dwindled.

“We celebrated prematurely,” said Ali Mokdad, an infectious disease expert with the Institute for Health Metrics and Evaluation at the University of Washington in Seattle. Biden’s 70% goal was a solid step, said Mokdad, but about half the population is not yet fully vaccinated.

Meanwhile, Florida Gov. Ron DeSantis and Texas Gov. Greg Abbott, Republicans dismissive of mask requirements, are staring at surges in their states. Together, Florida and Texas accounted for about one-third of new cases nationally in the past week. DeSantis doubled down on defiance Tuesday, blaming “media hysteria” and people spending more time indoors in the sweltering summer.

“Even among a lot of positive tests, you are seeing much less mortality that you did year-over-year,” he said at a Miami-area news conference. “Would I rather have 5,000 cases among 20-year-olds or 500 cases among seniors? I would rather have the younger.”